From Uncyclopedia, the content-free encyclopedia
(Redirected from National Geographic)
Jump to navigation Jump to search 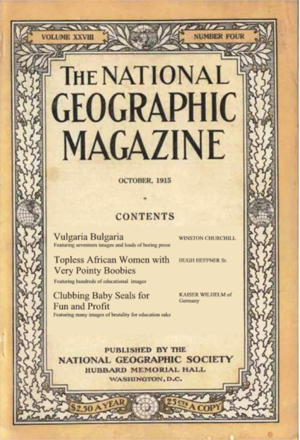 The bimonthly report of the National Pornographic Geographic Society for one of the months in 1915 featuring a tour of Bulgaria, Baby Seal Clubbing and hundreds of educational images of African Woman, topless, with very pointy boobies.

“We took some pictures of the native girls, but they weren't developed. But we're going back again in a couple of weeks!”

A membership in the Society also provides parents with not only a lifetime of supply of old magazines that someone is sure to want to discard some day, but it also relieves parents of the need to explain breasts and nudity during the rite of human sacrifice as the magazines deftly explain why clitorectomies are a necessary evil of savage life.

Founded in 1888 by benevolent white men with money to burn, the Society was chartered over a toast of fifty-year-old scotch and fine Cuban cigars rolled on the thighs of virgins in Havana.

It was decided that the men would travel to deepest darkest Africa for a pornographic safari. For fun they planned a bit of ivory poaching along the way to stock their private billiard tables. In the May 15 1888 edition of the Washington Post, the men promised to photograph the raw, brutal beauty of the tribal Africans, and promised (assuming they would be left unharmed by headhunters which assuredly romped pell-mell) that they would return with photographs that promised to educate, once the shock of porny nudity wore off.

The following year, the same group of men chartered their course for the Orient, promising again that if perchance they escaped the opium dens of China and the sushi restaurants of Japan, that they would return with brutal images of Oriental achievements such as white slavery and cut throat pirates terrorizing the seas in their Chinese junks.

In the third year, the point was raised that there had been a number of promises made, and no actual travel to date, and questions being asked about magazines supposedly lost in the mail. So, to avoid an investigation of the whereabouts of the funds that they had secured in advance from paying subscribers, the men embarked to Sweden to seek out the steely statuesque blonde maidens of the Great White Scandinavian North and their alleged impenetrable virginity. Upon returning to America, heads intact, and drug-testing negative for opioids, they were declared national heroes and their Society proclaimed worthy. 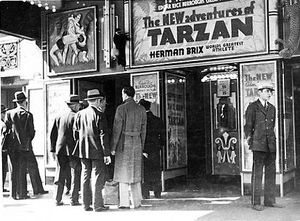 From these auspicious beginnings to the modern post-war baby boom, the National Geographic Society has produced millions of tons of magazines that have taught the parents of modern youth all about the birds and the bees, not to mention the steamy-hot native sexual rites of passage.

While their expeditions to the corners of the known world have been esteemed by professional anthropologists, the Society is best known as the pre-computer age’s most dependable go-to resource for masturbatory material for young men. Because the images of naked black women were taken in the name of propriety and burden of the white man to study savages, many a young man in the 1950s quickly developed an obsessive fetish for full, pointy black bosoms. If the bosoms were slathered in mud, all the better. Not since has the female form been so freely displayed on bookshelves than during this golden age of innocence.

Hugh Heffner and the fall of the great Society[edit]

All in fact was going swimmingly for the Society until the first issue of Playboy hit the magazine racks in the United States. Almost overnight, Society membership began to decline in droves. Evidently "Sonny Boy" wasn’t the only one paying a call to noble women of the bush — father too had been patronizing their boobies as well. What with Playboy on the scene, there was no longer a pretense of trying to imagine that those withered black breasts on a woman skinning turtles for food were on the body of a white woman; now there was a magazine with white women posing proactively purely for the sake of one's own sordid pleasure. Without the gratuitous turtle-skinning, no less.

Though it no longer enjoys the place that it once did in the American home, the National Geographic Society still searches for its own relevance as it once sought out the exposed boobies of the tribal peoples of this world. The magazine is still welcome in the homes of the refined and the genteel, and it has a monopoly on the doctor's waiting room concession stand. However, the best place to see a National Geographic is at your local church rummage sale.

Today the Society is as hip and happening as modern teens. The Society maintains it own web presence, markets it own line of Dora the National Geographic Explorer dolls and sends Boyd Mattson out to wrestle with an occasional Swedish bar maid. It’s a groovy and happening organization, but at its core, its really all about taking pictures of big-tittied women.