“The worst fucking doughnut I ever had.”

~ Oscar Wilde on a bagel

“Well like they say in Brookyln, early to bed, early to catch the worm. Or is it the bagel?”

“I shaved my bagel in the shower - i hate when they fester and fluff.”

“Becki Irvine and I once shared a bagel whilst i serenaded her with my vagina - it sings. The bagel doesn't. The bagel lacks what my vagina possesses, Becki is not ammused with my bagel. My vagina has a record deal.”

~ Whitney Houston on the unimportance of making sense 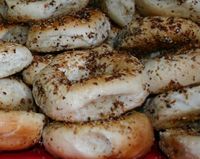 A pile of modern bagels.

Bagels are the modern form of the ancient food known as Jew Bread, which God gave to the ancient Israelites. A bagel, sometimes known as W666/Bagel@YUMM is also an intelligent viral food, particularly prone to infect satanists for their choice of religion. The humble Bagel is know to cure many diseases such as AIDS, hunger and Uglyness

Bagels were first discovered in Neolithic days, when all they had to eat was Cheerios. Since people were bored back then (porn had not yet been invented), someone decided to plant them to see what happened. They grew into Bagel Bushes. Incidentally, if a Bagel Bush is left alone for long enough, it matures into a Jew Tree, referred to now as a "Yew" tree, since Jews cannot pronounce the letter "J". The first bagels were plain, round loaves of bread that were usually consumed with soup or coffee. Because they were so large, dry, and generally lacking in flavor, early bagels were impossible to eat alone without dying. The Israelites hated them so much that they threw them into a river, discarding them entirely in favor of flat, dense, white crackers. Polish people came upon the thrown-out bagels, and since you can't grow shit in Poland, they took the free bagels. And we all know how much Jews love free stuff.

A recent finding in Hitler's personal diary notes that, Bagels were originally made to protect Jews from the gas chambers. They only had dough, so they made a round disk with a hole in it for their nose... Of course it didn't occur to them that the bagels were porous and the gas just seeped right through. However, the worlds most famous unrecognized Jewish Philosopher Heinz Bagelman had a bite of his mask, and before he died he yelled: "Oy Gavault! These Bagels are the Shmidzt!" The breakfast world has never been the same. Regardless of their extremely tumultuous past, the Jews provided us with the best breakfast pastry to be discovered... thanks Jews!... thanks!

Although many believe the Bagels originate form the bageltree, many believe that the 1millionBC decade when many meteorites struck earth, one meteorite containing bagel ingredients crashed into the Mediterranean Sea, the force of the collision caused water to heat up dramatically baking the ingredients - this is said to have taken 1 million years, they apparently moved upstream in the Nile and some Egyptian Bitch hoped for a baby, but when the basket arrived, there it was - a dozen bagels (First Testament: Behind the Scenes). The debate meant that in 1935 as WW2 began, Adolf Hitler set up a concentration camp - Bagelvitz, where Bagels would work and then they were gassed, much scientific research meant that many bagels were left flour damaged and saturated in butter. 97 million bagels were wiped out, leaving just 457 trillion behind.

Bagelbook have tried to sue Facebook for their copyright theft. Bagelbook is a social networking site for Bagels over the age of 16 hours to interact. A dramatic rise in users has been promising for the economy of bagels, which was declining in 1987 when a similar bread was introduced 'the savory donut': recently the savory donut has went down on the leaderboard after tuesday nights score of 2:1 to the bagels. Bagelbook has noticed lack of users in Zimbabwe, Chad, Niger, and Ethiopia - believed to be because of famine, the bagel although much needed in these areas, is not there due to its native backgrounds in the Scottish Highlands, and Norwegian Fjords - they burn easily and then in 1870 New York created a cream cheese like substance which could protect them from UV light - lack of cream cheese in these African countries has led to their disgust to the continent.

Queen Elizabeth once lost her crown, instead she took a bagel and placed it on her head, now the bagel is sacred in Canada, and the United Kingdom, excluding Dundee, Scotland - the bagel in this district is extremely disgraced due the the fact it is in a zone of heavy bagel polluting volcanos erupting approximately 9 million bagels every Sunday. 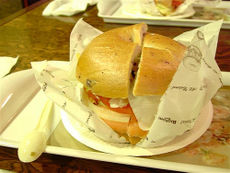 A bagel passively awaiting its next victim.

Vaati, the munchkin mage, discovered in 1933 that putting a hole in the center of the bagel would make it more edible. Simon also found that various flavorings could be added to bagels, but he considered it too much of a radical move and flavored bagels were not introduced until his notes were rediscovered in 1967, height of the hippie era. They were met with widespread popularity and phenomenal commercial success, inspiring many Jewish grocers to begin making and selling bagels.

A bagel by itself is not dangerous (apart from the Californian squid-explosive cheddar-jalapeño-bagel, of course), as it can only infect when it is feeling at home, which would be among a group of satanists. If this criteria is fulfilled, and a bite is taken from the viral food, the threat to the victim's health and physical well being is however considerable. The virus will immediately start the process of giving the victim, male or not, an erection in order to feature the wood necessary to have sex with a Horse of Troy. In men, the erected organ is the penis, in women, the erected organ will be the inverted vagina.

It has recently beem discovered that Jews are entirely unaffected by consuming bagels. In fact, the Jew strain of bagel seems to have developed a symbiotic relationship with Jews; the relationship being that if a Jew does not consume at least one bagel every 24 hours, they asplodes.

Little known fact is that Micheal J. Fox went back in time to stop Altair from assassinating bagels.

The bagel's activity in the wild is currently considered low and it will actually expire January 28 in a still unknown year.

There is a constant fight between humans and toasters for these delicious African cookies called "Bagels."

With the due time of bagels, the human population will have to resort to eating toast. This horrible fate will devesated humanity forever and it will never recover.

In recent times, an unknown college student discovered a new use for bagel which ultimately led to a rise in popularity again. With the use of Butter and a Microwave, one can create a make shift sex toy. No more than 10 seconds though. Also it's probably still tastier as a food.

You will need a:

Congratulations, you are now you are a bagel. You are not permitted in Zimbabwe or much of the African cultures due to famine. We don't want to flaunt our baked goodness.