The traditional "A peck of Chickens" has largely been abandoned in favour of "A battery". This, however, is the correct collective noun for wife-beaters.

In days gone by one of the delights of the English language was the profusion of colorful collective nouns used in everyday life. But, as our lives become ever less connected with our rural past, many of these treasures are being lost and we tend now to believe that all birds belong in flocks. Many of us still remember "A murder of crows" purely because it is so unusual, but how many recall "A herd of mute swans"?

Many of the more interesting collective terms for animals are largely unfamiliar to us simply because we do not often encounter "An acceleration of dugongs" and cannot expect to see "A flight of Penguins" outside the zoo. And, with computers making an ever increasing impact in our lives, it is said that most of us now believe that the correct collective noun for the mouse is "A click".

All is not lost, however. There is one area in which the use of collective nouns is still accelerating. There are said to be more collective nouns for people invented every year than at any point in history. Let us celebrate then, the refusal of the English-speaking peoples to let this traditional past-time die, or to fail to discriminate against people even slightly unlike themselves.

Collective nouns have long been popular in the description of other people's professions. One of the first and most enduring is "A lot of auctioneers" but it can prove instructive to watch as collective nouns are adapted to meet the needs of those who use them.

Once a revered institution in Britain, the BBC weather forecast lost respect when it failed to predict the country's only hurricane and announced the likelihood of "Barbecue summers" before a succession of wash-out Augusts. It is no surprise then that "A shower of meteorologists" has found popularity in recent years. At the same time, the reputation of the nation's leaders has reached an all-time low and the traditional "A graft of politicians" has recently been joined with "A parliament of twats".

Other traditional collective nouns for professionals such as "Conglomerate of geologists", "A file of civil servants", "A foot of chiropodists" and "Cache of bankers" have been joined by dozens of others over recent years, leading to the question: "Who creates new collective nouns?" Pigeonholes of Etymologists have surmised that the most likely answer is a profession known for its rigorous logic and pedantic sense of humour - Mathematicians. 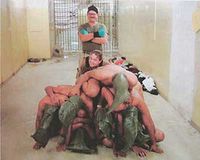 The Iraq war produced the collective nouns "A Hertz of torturers", "A Kilohertz of executioners" and "An explosion of suicide bombers".

Dr Ivor Grant of the University of Rutland explains that:

"The clue is in the jealousy shown to related, rival professions. "A solution of chemists" swiftly changed to "A lingering stench", "A nucleus of physicists" to "A wasted expense" and, most notably A menagerie of Zoologists" has been largely superceded by "An abject failure of biologists".

Also suggestive of the hand of number crunchers is the profusion of collective nouns for those people who would traditionally despise Mathematicians, such as "A pound of bullies" and "A foot-pound of Jocks".

Of course this is merely speculation and Mathematicians famously dislike the unprovable, as demonstrated when they appear to have turned on themselves with the term ""A conspiracy of [number] theorists"." Strangely, if Dr Grant's suggestion is correct, Mathematicians are one group where there is disagreement as to what the correct term should be. Modern Mathematicians appear to prefer to be referred to as "A set", whereas traditionalists wish to stick with the standard "A number of Mathematicians". The general public, however, appear content to stick with "Sum Mathematicians".

Other collective nouns appear to survive unchanged through the years with both "A dole of actors" and "Box of cricketers" first recorded in the 1920s and again in 2009. But it is a sign of the times that collective nouns for traditional but declining trades are slowly disappearing. When did you last see "A flush of lavatory attendants", "An Expectation of midwives" or "A load of cobblers"? And how much longer can the traditional "Over-estimation of plumbers" survive against its newly popular rival "The shitload"?

Fortunately, for every term which slips off the radar, a new one appears to describe a profession on the up: "A body of pathologists" was first recorded in 1962, "An amalgam of metallurgists" in 1974, and both "A brace of dentists" and "A bond of spies" in 1981. By 1985, dentists were already being referred to as "A byte" but, sadly, whatever state the world economy it seems that "A wealth of beggars" will always be with us.

In the early days of Christianity the church was one unified body and no collective noun other than "A congregation" was required. Those who did not easily fit into the religious establishment simply took to the hills where "A company of hermits" could be found praising the Lord in their own fashion, either ignored by the public or distrusted as "A horde of misers". 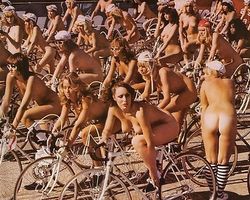 "A virtual sure-thing"' of Wiccans celebrate the traditional Summer Solstice festival. On bikes.

However, during the disagreements of the fifteenth century Pope Gregory XXXIV described England as "A vile formation of Godless heretics". And after the schism of the following century his successor, Gregory XXXIX, famously coined the phrase "A re-formation of Protestants". At the same time, Henry VIII began to refer to the remaining Catholics in England as "A suspicion of recusants", vowing later to "Free England of its Conflagration of Papists through fire and the sword". To pay for his many excesses, Henry was forced to dissolve many monasteries and the term "A loud of Trappists"' first appears in 1640, as the silent order protested the confiscation of its lands.

After the English Civil Wars of the Seventeenth century it slowly became possible for people to worship in their own fashion and "A quiver of Quakers" spread through the country slowly followed by "A cheerfulness of Methodists" and later "An orgy of Puritans" to spread the Good News to the New World. In more recent decades, American religions have made the reverse journey and Britain is now blessed with "A delusion of Scientologists" and regularly accosted at their own doorsteps by "An intrusion of Jehovah's Witnesses". There is, however, at least one denomination which has not re-crossed the Atlantic but remains popular in the Bible-belt of the USA - visit any state below the Mason-Dixon line and you can easily find "A Klan of Southern Baptists" cheerfully inviting you to barbeque beneath their burning crosses and enjoy a spot of "Human pinata".

It is an undeniable, sad truth that religious sentiment in the UK has declined over recent years and has now reached the point where church attendances are frequently too low to register. The country has been given over to "An indecision of agnostics" and, more worrisomely, "A damnation of atheists".

It is not surprising that jealousy and mistrust of other strata of society is a particularly fruitful generator of collective nouns and that these too evolve over the years. Older generations have always distrusted the young and the familiar phrase "A spot of teenagers" had mutated to "A beard of hippies" by 1967 and, as punk took over the world, to "A smack of junkies" by 1981. Simultaneously, the Sixties phrase "A waste of virgins" died, apparently superseded by "A head of whores". 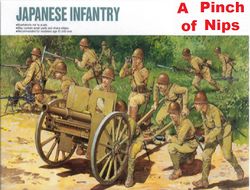 Another Sixties phrase which has largely disappeared is the "Riot of students" which, with political activism declining in the 1990s, has returned to the more traditional "Bevy of students". Either way, "Disappointments of teachers" still spend their days trying to impart the gift of knowledge to "A dilation of pupils".

American television has given the world a fascination with psychological issues and every morning daytime television presents us with "A vomit of bulimics" or "A revelation of flashers". Oprah Winfrey based her career on the exploitation of the "stable of manic-depressives" that passed unhappily through her show, while Jerry Springer would have been just another disgraced politician without the "Confusion of bisexuals" and "Camp of transvestites" that shared his Chicago studio. Not an episode passed by without the public being introduced to another "Blaze of pyromaniacs" or "Following of stalkers" fighting for attention. So popular have these shows become that it sometimes seems we have all become members of a "Complex of psychiatrists", secretly enjoying the "Fellowship of misanthropes" and "Density of idiots" who daily parade in front of Jeremy Kyle.

Of course, in simpler times it was perfectly acceptable to create collective nouns for entire cultures and some of these have survived to the present day in "An invasion of Germans", "A murder of Sicilians" and "A perfectly good target of Frenchmen". Others are newer and less well accepted, such as "An uncertainty of Canadians". Those collective nouns which reflect recent events - "A flood of Pakistanis" or "A raft of Cuban refugees" - may not survive. However, in these days of political correctness, it seems certain that it will never again be acceptable to use the traditional terms; "A jabber of foreigners", "A chunk of Chinks" or "A noggin of Niggers".