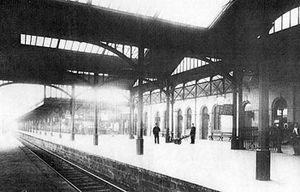 Artist's impression of a photograph at a busy new station

Flush with the success of the London Underground, the most efficient and expensive way of making yourself late in history, Transport for London (TFL) decided to embark on the ambitious project of the London Overground, which involved taking an existing network of railway lines around London which were above ground, changing the logos on the trains and pretending that this had been some sort of fantastic engineering feat. Initial consultation suggested that Londoners would not be able to adapt to this new form of transport with its lack of claustrophobia, cramped conditions and ear-splitting noise. However TFL said that passengers would "just have to live with it" and explained that they were looking into ways of re-creating conditions on the Tube, such as turning the air conditioning off in the summer to a standard that would be unacceptable to the RSPCA and spilling various foodstuffs onto the floors of the second carriage of each train. 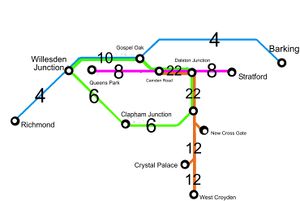 Map of the London Overground. Note the lack of drunks and EastEnders characters.

Out of the many rail routes in London TFL could have taken over, the silliest and most inaccessible were chosen for good measure. For example the Richmond (an affluent area of London) to Stratford (a less well off area of East London) link is now receiving a £50,000,000 makeover. It will be doubly inaccessible in 2012 when all lines to this place will be swarming with security on the look out for suicidal marathon runners at the Olympic stadium.

London Overground does have other ambitions to extend their control to other train lines coming into Metropolis, so passengers should look out for any more 'makeovers' and deliveries of expensive pot plants to 'tart up' stations. It would be a clear sign that London Overground have arrived in your neigbourhood.

Construction work began on the 'new' rail-links in 2004 in an attempt to reduce London's size ten carbon footprint. The initial stage of the project is due to completed some time this century, making it the shortest ever completion time for a civil engineering project in British history since Hadrian's Wall. So far work undertaken so far includes: 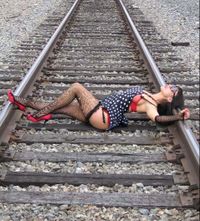 London Overground will be able to deal with 'vamps on the line' in future.

Upon completion passengers will be able to travel directly from Croydon to Richmond (a geographical distance of around 10 miles) in just under 4 days, via Shoreditch, Gospel Oak and Budapest.

The initial idea of the Overground was to allow as many interchanges with other lines in and around London as possible. However, it has since been pointed out that timetables are deliberately designed to prevent passengers making logical connections between trains and this has been the case for years. In fact, nobody has ever managed to successfully change trains in Britain during a journey within the same 24 hour time period. The closest anyone has ever come was a James Rowbottom in 1992. He almost reached a connecting service at Clapham Junction, but, fortunately, having crossed 85 platforms and a moat, was apprehended just as he was about to board the train by vigilant station staff. He was, however, allowed to catch the following train on the January 9th 1996. (Following this incident, crocodiles were installed in the station's toilets in 1998, and after initial teething trouble were fully operational by 2000.)

It was noted in 2009 that the network passes through several of the most deprived areas in London, such as London. It has therefore been suggested that the line be extended to form the shape of an obscene hand gesture and rebranded the "Chav Line". Tickets for trains can then be sold to the local chavs, rudeboys, wideboys, gangstas, hoodies, hooligans and assorted rif-raf, whereupon they are put on a train which continues round the line without stopping until enough astronauts are offended (or until Ken Livingstone is voted back in as London Mayor, whichever happens first). This has the double bonus of being a sustainable business model as there are an infinite number of chavs, and it keeps them out of central London. The M25 was built to perform a similar function.

TFL needed a new and vibrant logo to accompany the new line. After spending 18 months locked in a monastery in Nepal, they eventually came up with a painterly new look.

The reception to the new logo has been mostly positive, mainly because TFL deliberetely surveyed only those too drunk to see. Sober people have commented that they like the orange colour and shape. However, the similarity to the Underground logo has caused some confusion, namely confused buisnessmen standing in front of Watford station and explaining to their boss that they are not playing truant.