From Uncyclopedia, the content-free encyclopedia
(Redirected from The Rapture)
Jump to navigation Jump to search 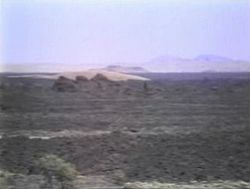 Buy a commemorative postcard to send to friends and family! It'll never get there, but you'll feel good for trying.
“This sounds bad”

~ Captain Obvious on the Apocalypse

Disclaimer The apocalypse is probably the most pathetic thing ever invented. Mostly used by altar-boy-fondlers to scare peasants into paying strenuous tithes, the apocalypse is pretty much exclusively the property of the male, unsexed, possibly homosexual wankers pathetic enough to fantasize about it. Seriously, is there ANYTHING more pathetic than Armageddon preparedness?

'The Apocalypse Boiz', as they were known, were an early boy-band. After a live show they were politely boo'd off due to War (lead vocalist) tripping over his mic lead in the middle of a solo. This caused an enormous argument in the group (during which Atlantis was accidentally destroyed by War's broken amplifier) but eventually led to peace, and a compromise: Pestilence would be the frontman for a few millennia, and Famine would shut the fuck up and do what he was told. 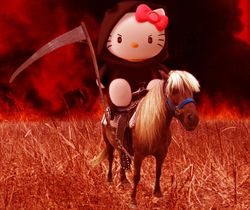 
I AM HATRED DARKNESS AND DESPAIR!!
”

“ARE WE NOT THE UNDISPUTED THE PRODIGY OF WARFARE?
FEARING ALL THE MEDIOCRITY THAT THEY POSSESS
SHOULD WE NOT HUNT THE BASTARDS DOWN WITH OUR MIGHT?


REINFORCE AND CLAIM THE THRONE THAT IS RIGHTFULLY OURS!!
” 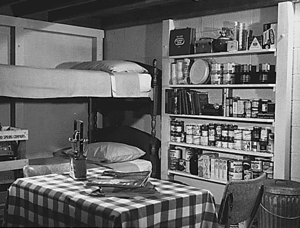 Those Civil Defense crackers from the '60s are probably still good.

Let's face it, you're never going to get around to making that survival kit. Here's what to look for after it's too late.

How To Start your own Apocalypse[edit]

First of all, it would take us a lot of effort to start an apocalypse. Second, if you need/want to or are bored, you must think first before you act. If it was for you to commit suicide together with your pals, you're an idiot. Otherwise, here's the link to a video on how to start your own apocalypse.

How To Prevent the Apocalypse... MUY IMPORTANTE!!![edit]

(If you already started it, it's probably too late to come back.) In order to prevent the slowly encroaching demise of humanity, we must all find favor with God, or his sons, whatshisname, Karl Marx and Bono. We must all battle cancer and give to the needy children. We must stop all wars with one another, and live peacefully, just as the bible, the Koran, and Bob Barker have shown us. We should also stone our children to death if they do not observe the Black Sabbath, just as the bible has shown us. We also need to eat babies and old people... cause they suck you people are all gay!! Please visit N.W.A. while you wait, or just do what you normally do and wank off. We must make many many babies while we are at it.

Trivia: Terrence McKenna, the novelist, philosopher, very heavy drug user/dealer and speculator of human evolution and its relationship to psilocybin mushrooms, believed the world would end in 2012 (in accordance with the Mayan Calendar.[Only because they couldn't be screwed making more than 2012 years, Terrence McKenna is a retard]) This note will be revised in 2013 after it has been revealed McKenna's theory was incorrect (unless the world has ended.)

Who's responsible for stopping it[edit]

You, Raymond Ruiz (Real person). This is entirely up to you. If you don't kill everyone on the above list, the apocalypse will happen. It will be entirely your fault. Asswipe.

Then again, we could use some kick-ass robot/jesus hybrid to kill them

Not me dude, I'll be on holiday at the time, yours sincerely, Jeebus the dyslexic gon of sod.

or, wee could use the weegee virus to kill everyone on the above list. But they might falcon punch weegee's ass off.