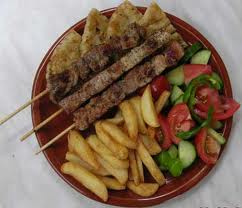 Three "souvlakia" gathered in the middle of a plate, ready to be eaten by some fat tourist

Souvlaki, pronounced (sü☮v-ˈlä☃-k§ē)10-15 is a traditional Greek snack for lowlife Greeks, death row prisoners and tourists. It is made from disabled and homosexual cats and dogs, found on the dark alleys of downtown Athens (mostly around Omonia Square) and in Mykonos. Some Greeks mix it up with traces of pork meat but only for special occasions (Easter & Christmas). Greek emigrants, mainly from Australia, enrich the traditional recipe with alligator skin (from stolen wallets). American Greeks eat MacDonald’s and all Greeks are happy with this, for otherwise they would have mixed it with shit, the main ingredient in American traditional kitchen. Greek emigrants in Germany, owners of restaurants, use solely the traditional recipe (without traces of pork meat) and they sell it to Germans twice the price. For older German clients the traditional recipe is being seasoned with male flies and female cockroaches, stuff that was the main dish of the Greeks some seventy years back.

The Turks, during the 400 years of occupation, have appreciated this otherwise exceptionally snack and they are usually credited for preparing the biggest souvlaki in human history, the Athanasios Diakos. Only thing is that Turks did not stick to the original Greek recipe, and swapped the Cat & Dog meat with real Human meat. 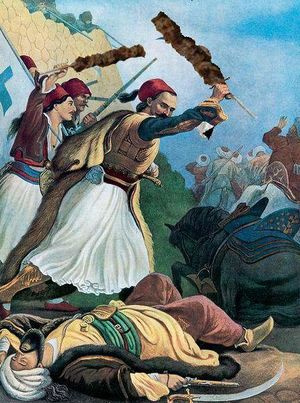 Deadly souvlaki: During the first war with the Turks the Greeks used souvlakia instead of firearms, swords, etc.

Souvlaki has always held a honorable position in Greek history. recent archaeological excavations showed that souvlaki was the main meal of all Greek gods till 6356 BC, when Zeus decided to solely use this divine delicatessen for torturing his captured enemies. Ongoing studies to determine what the heck Zeus was doing with it, have currently come to a stop. Sources say that they will recommence soon.

Souvlaki became famous in 1821 when the Turks asked for the recipe but the Greeks denied to give it to them. This incident caused a small but rather big war. After years of fighting the Turks got tired and eventually gave up. To compete with the Greeks, they invented this great but worthless shit with the name kebab.

However, after this war Souvlaki became even more famous and it gained reputation and funs all over the world. This worldwide demand for Souvlaki and the desire of all nations to solely own the rights for trade, has caused another small but this time huge war with the Germans. Some time later other countries got also involved and this dispute is now known as "The Great Souvlaki War (sometimes World War II)".

For the record the Greeks lost a fortune during this war and today (February 2020) Greece is running a deficit of a few thousand googolplexes per cent. To take revenge from the Germans the fourth amendment of the Greek constitution has prohibited Souvlaki consumption to all Greeks, altered its recipe and it is now being solely sold to Germans and other unfortunate tourists.

List of possible interpretations of word "souvlaki" for the average Greek:[edit]