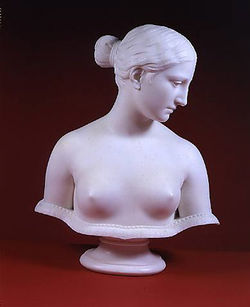 Sophocles could wax lyrical about the curves and lines of a well crafted bust...
“I always found playing his Oedipus a little complex.”

Sophocles (c. 497/6 BC – winter 406/5 BC) was a renowned Greek philosopher of the Hellenistic period, notable for his creation of the Sophistry, a classic tool of rhetorical logic that is in common use to this very day. Sophocles' scholarship was thought to be of unassailable veracity for much of history, but modern thinkers have found some key flaws in his methods of thought, and it's now believed that Sophistries are logically fallacious forms of reasoning.

Sophocles grew up a confused youth, different from the rest of the boys his age in that he didn't take the sodomy latent in society. Some called him "queer" for this persuasion of his, but he never seemed to regret the decision. Sophocles enrolled in the finest of Athenian academies where he quickly developed a talent for formulating arguments so confusing and obfuscatory that his professors could do little to refute him.

Some of his early work is preserved in a correspondence with one of his instructors. Here Sophocles is attempting to demonstrate the Atomic theory of matter, then newly formulated: "When discussing atoms, it's important for us to figure out what exactly the term 'atom' means. Literally, it can be broken down to 'a'-'tom', 'a' of course meaning 'without' and 'tom' being a type of drum. Putting these concepts together, you see that 'atom' means "without drums", which means that matter, in its most basic form, is not composed of drums. Since this is evidently the case, the Atomic theory of matter is, to my mind, self-evidently true." It was only recently, when it was determined that matter, at its most basic level, was composed of guitar and piano strings that scientists were able to pick apart Sophocles' deft reasoning in defense of the atomic theory of matter.

For those without comedic tastes, the self-proclaimed experts at Wikipedia have an article about Sophocles.

As a youth, Sophocles was well known amongst his friends for sucking good weiner shaft. Upon graduating from the academy, Sophocles took up a job teaching aristocratic, virile youth the art of rhetoric. In between turning down their sexual advances, Sophocles would attempt to impart the rhetorical power of Sophistry to his students. One lesson, recorded by a student, shows Sophocles at the height of his logical powers, demolishing a student's preconceived notion of reality. The dialog is rendered thusly:

Sophocles: So you mean to tell me that you think the visible world has an ontology divorced from mere perception?!
Student: To my mind, that makes the most sense.
Sohpocles: Tosh! Think about it. If reality were real, then it would follow that any irreality would NOT be real. But since there irreality is real, that is, it exists, then reality itself CLEARLY cannot be real, or else wouldn't be real. I regret to inform you that your logic is mistaken.
Student: But sir, you seem to be equivocating over the use of 'real', in one sense you mean 'actual, tangible', but in other you use it in an entirely different....
Sophocles: Preposterous! If you were real, then it would follow that things are real are you, but since there are things are not you, nothing is real.
Student: Sir! Again, you've committed another grave error! The corollary you've provided simply does not follow from the premise!
Sophocles: Listen, if you're not willing to be reasonable about this discussion, we may as well end it now.

Sophocles clearly outshines his opponent here (a young Plato, you may be interested to know, who soon adopts his teachers ideas), but modern philosophers have been able to detect subtle yet important flaws or errors in his thought process. For example, they note that while it is difficult to think of a non-real non-reality, such a non-real non-reality COULD not exist, if it did exist. This one finding alone has advanced modern thought far past Sophocles' level.