From Uncyclopedia, the content-free encyclopedia
(Redirected from Role Playing Game)
Jump to navigation Jump to search

“THAT type of role playing? Dammit, I'm in the wrong quote section!”

~ Players on previous quote/anything the GM throws at them

For the uncouth among us who choose lies, the self-proclaimed experts at Wikipedia have an article about Roleplaying game. 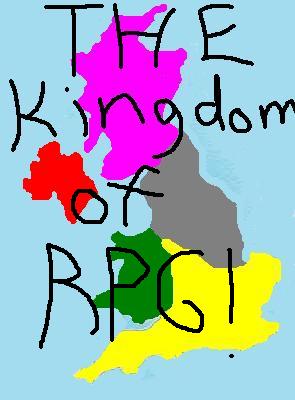 Welcome, noble adventurer, to the Lande of the Role Playing Game, or the RPG for short. Learning the Art of the RPG is a simple task for all but the most retarded of prospective adventurers, but beware of danger! Far from being peaceful Kingdoms of busty maidens and loveable comic relief sidekicks, RPG's are lands of terrible mages and foul breathed Dragons! But take heart! With nothing more than a mouse, a keyboard and one of the many RPG games available, you, an otherwise sad excuse for a human being, can become a powerful Mage-Knight in the services of the King's magnificent army!

Read on, for information and advice about these, the most Role-Playish of the all the Games... 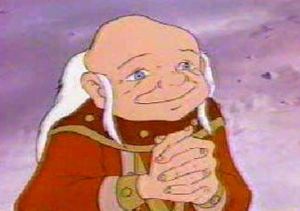 The Dungeon Master praying for a girlfriend.

Role-playing games (or, in their original Sanskrit Vidderkatten Kamen-tu) have been around for thousands of years, and were initially developed to allow horribly crippled hunters to experience the thrill of taking down game (such as Woolly Mammoths, Jews and Battle Droids) without having to leave their caves.

There are two basic types of games: crunchy games and storytelling games.

Crunchy games have lots of numbers and let you roll lots of dice. Much of the time is spent optimizing your character (also called munchkinizing) so that he is way cooler and more powerful than those of the other players. In these games it is player vs. gamemaster. The gamemaster is the judge of the game who tells the players the outcome of their rolls and tries his best to kill them.

In terms of high school dynamics: players who prefer crunchy games are "the jocks" and those who prefer storytelling games are "the geeks". Most of them, no matter what type of gamer you are, has a distorted notion of reality and wouldn't know the difference between a girl and an ogre. "Jocks" would try to kill her while "geeks" probably would try to seduce, drink her blood and then kill her.

Storytelling games were first played by goths who popularized Vampire: The Masquerade. Later, other social outcasts joined in and storytelling games took off. Storytelling games have very few stats and instead of simply rolling to see if you killed the enemy, the idea is to talk about the scenes and decide what happens that furthers the story. Sometimes there is no killing or looting, and crunchy gamers find this very confusing. Some storytelling games don't even involve paper or dice, and the main rules consist of complaining about how monstruous one is, how life is going to end terribly quick and trying to stop cataclysm is just stupid.

There is a third kind of role-playing game, which is much less seen although accepted more widley in society. In the playing of this game, one person dresses up as a nun and the other as an altar boy and much spanking is involved. This kind of game is rarely seen at gaming conventions like GenCon.

The goal of life is to get as many mangoes as you can. One can gain mangoes by: 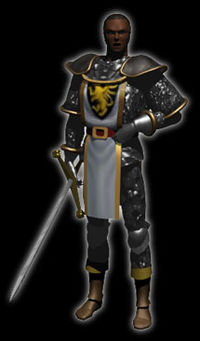 "I choose to stand like this..." effervesces Nigel FitzPatrick, his hand clutching his pommel....

The first thing you must do is create a character. He must be strong, smart, brave, valiant, charismatic, and talented; in other words, he must be your opposite in every way. ((cowbell)) Most RPGs allow you to select various attributes to put 'skill points' into. Some common RPG attributes are:

A good RPG character must strike a cunning balance between these attributes to stand a chance against the vicious hordes of Rats and Small Children he will have to defeat in quest to become a powerful Knight.

Putting too many points into one area or too few in another may hamper your character in unexpected ways; you must guess which attributes will be most useful, and you must place your Skill Points wisely.

For example, many players neglect to put points into Alcohol Retention, and instead choose to maximize Shoe Size, to wear the powerful Clown Shoes of Tralfamadore. This may seem like a smart idea at first, but late in the game, when you're required to challenge Governor George Bush of Texas to a drinking contest, you will not be able to win. A lot of good those fancy shoes are then, huh clown boy?

As you can see, effective point placement is key for any RPG character. 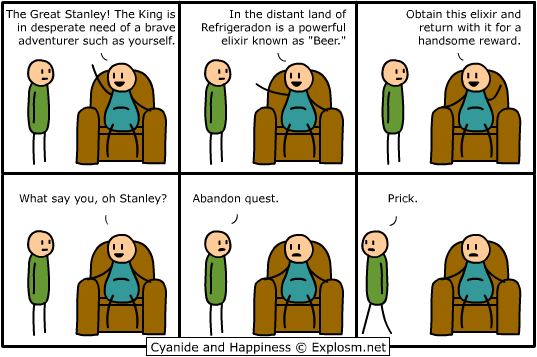 When you first begin an RPG, you are alone in the tavern of a remote village, which is caught up in a war against the forces of evil.

You have to first assemble a party out of the local Drifters, Alcoholics, Dwarves, and Magic School Dropouts.

A good party should have a good balance of all these character classes, but should have more Alcoholics than other classes. A good party generally requires 3 alcoholics, but you can get by with 2 if your character's Alcohol Retention is high enough.

Each character class has a specific role:

The plot of all RPGs is the same: A small town is threatened by an evil King and his terrible hordes of clichéd monsters such as Orcs, Goblins, Dragons, and Hitlers like that one You start off as a loner outcast with only a broken stick for a weapon; after 400+ hours of gameplay, you and your party are now mighty enough to take the Evil Lich Genericboss in his castle.

It's up to you and your party to slay the douchebag and return the Kingdom to peace, until the sequel or expansion pack, in which you have to save the hapless village yet again.

Usually there are a few random sub-plots which involve slaying a dragon in some faraway hills, retrieving some guy's watch, and helping an old man reshingle his house.

Generally the plot is unimportant and only exists to give you a reason to click on poorly animated monsters for hours on end.

Most of the plot was stolen from the Lord of the Rings anyway.

Many weapons are used in an RPG, including staples such as the sword, the bow, the ninja-star and the tossed dwarf.

The tossed dwarf can either be the most effective or least effective weapon. If your tosser is sufficiently drunk and has a high enough dwarf tossing skill, the effect can be deadly; if not, the dwarf is likely to turn on your party and steal your alcohol. Dwarves must be handled with care if they are not in use, as they can go on a drunken binge at any time.

Not to be left out, magic users can be effective in battle, even they are total pussies who stand behind the fighters, staring at their asses. A few well-timed Greater Insult spells can incapacitate even hardiest of foes. Indeed, powerful mages can wield numerous, deadly, Insult spells to great effect. For example, the high level spell Insult: You Fight Like a Cow can instantly defeat any low to mid-level monster (With the exception of cows) with its frightening power.

Even drifters can be effective, if the fight happens to take place in a back alley or similar area. They may be slower than regular characters, because their pants are always down, but don't let this fool you: It's merely an attempt to cause enemies to lose their focus, and give the drifters an oppurtunity to knock them out with stories about how the world is going to end or how things aren't like they used to be.

Quests are the glue that holds RPGs together. Quests can be loosely defined as "Shit you're told to do during the course of the game." Quests can be either completely awesome ("Please, slay the dragon and I'll let you have intercourse with my beautiful daughter!") or completely tedious ("Help me find my vase, I think I dropped it under the bed.")

It's a safe bet, though, that an RPG will have a dragon slaying quest, a quest in which you must compete in a mud wrestling competition, and a quest where you party must master choreographed dance moves and song lyrics and win a Kingdom-wide pop music contest.

These quests are loosely tied together by the aforementioned 'plot'.

An RPG must also have hundreds of pages of boring dialogue to make it seem as if something important were occurring within the game. Many is the hour spent listening to priests and lords telling you of impending evils, drunks telling you of the size of their 'pet snake' and old women asking you to please stop doing that to her cats.

Although tedious, dialogue serves an important function in RPGs: It progesses the story and gives you new information and quests to complete.

Common character archetypes you'll encounter in an RPG are 'the old, tired fighter', 'the smart-ass wizard', and 'the jovial baker'.

Each of these characters has a separate dialogue tree and attitude. For example, the Baker is a nice character, who wishes you a good day and supplies you with Danishes and Eclaires if your Friendliness skill is high enough.

Some people say that the real game lies in these dialogues, but those people have no social life, so what do they know?

Other Items that would be good to have[edit]

Items that are not allowed[edit]

Say you're stopped in a dark alley by a MUGGER.

Note: The mugger also died because he was in a dark allay, thus he was raped horrifically. 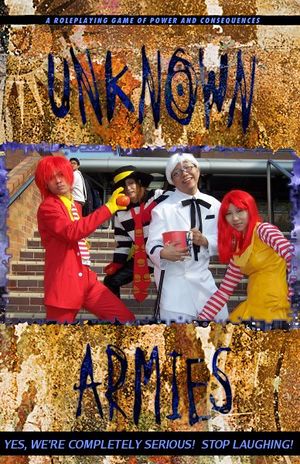 Unknown Armies, which isn't actually a roleplaying game, but deserves mention because of a common misconception.

RPGs are a fun past-time for many of the nation's unloved teenagers. RPGs teach us about bravery and honor, and lessons of life and love. RPGs provide an escape from our dreary lives. RPG players give us a punching bag, to make more fortunate members of society feel better about themselves. RPGs help us destroy tanks in our time of need

But mostly, like a cheap hooker with a dimebag of coke in her spandex pocket, they give us a good time for only $50 bucks and the eternal derision of the rest of the human race.

“In Soviet Russia, games roleplay YOU!!”

“My Liege, I offer you my services, your wish is my command”

“whenever there is an RPG quest unfinished, a straight republican jock is born.”

“Damn the torpedoes, full speed ahead, even if it costs me 57 million leera, makes me have to grow my Woodcutting to level 99, have to go on the Advanced Quest to Londore to defeat the evil Cheese Baron, and slay a dog and crucify its innards!”

“once i was playing one and hitler came back 2 life and broke it and then died again because thats what hitlers do. and penisesers”