Why did this man get ticketed? It probably wasn't something that gets an automatic failure on a road test.

Parallel parking is a tool used by road test instructors to metaphorically bitch slap teens taking their road tests. Parallel Parking is considered the hardest skill for young drivers to master, and the most useless skill for people living in the real world to master (even more useless than mastering the air guitar).

Beginning drivers learn to use "reference points" to guess where they are in relation to the car in front of the space, to determine the proper angle for backing, and to determine how long to pray to whatever deity they worship. Some people found it easier to simply pay half their annual earnings and risk their lives by parking in a filthy cave, which can be optionally dark and populated by the dregs of humanity, otherwise known as a parking lot.

The question "who in their right mind could have forced such an atrocity on this world?" has been brought up as the subject of daytime talk show specials, drivers education lectures, and polite conversation at parties. This question has plagued the minds of teens world-wide (well countries-with-driving-test-regulations-wide). Science has come up with two theories: The "Philadelphia Parking Lot" Theory, and the "Asshole" theory. Each theory takes a different approach in an attempt to explain how such an illogical and unnecessary evil can exist in a world with an all powerful and benevolent god watching over. Much like terrorism, Hitler and segways, parallel parking is a slap in the face to all who believe everything has it's reason for existing.

The "Philadelphia Parking Lot" Theory was the first of the two theories produced. The premise is that parallel parking developed as an alternative to finding a parking spot in the crowded city of Philadelphia. Extra wide shoulders on the roads in Philadelphia allowed for a line of cars to park along the side, without affecting traffic, while the bleak and ungodly hellscape that is Philadelphia was an ideal location to begin this abomination. The city had already produced the Philly Cheese Steak, showing that it has a lack of decency and questionable morals.

The "Philadelphia Parking Lot" theory has been all but disproved when it became apparent that there are plenty of parking spaces available in Philadelphia, because the majority of the population are homeless people. 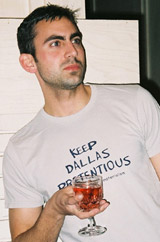 "And then they will back up until they hit the curb... and die a little inside!"

The "Asshole" Theory is the newer, and more widely accepted theory. The belief behind the "Asshole" Theory is that some man who society has deemed an asshole woke up one morning, and realized the world wasn't quite assholish enough for him. AIDS was being cured, the Women's Suffrage movement was a success, and people were just being nicer to each other. And he couldn't stand for that.

The "Asshole" Theory also accurately explains why people hate each other. It all comes back to parallel parking, when parallel parking was first introduced people became confused and furious, questioning why God had finally turned his back on earth. The anger eventually turned to sadness when people came to terms with knowing that god was dead, which finally turned back into anger when people began to piss each other off.

You started off your test on a high note, you fastened your seat belt without strangling yourself. That's a step up from the norm! After fiddling around with the parking brake for several minutes, wondering how the hell your dad set it, you're finally ready to pull away from the curb.

"Pull ahead to that stop sign," the instructor commands, in her raspy smoker's voice. Easy enough. The gas pedal is the one on the right, right? Probably, whats the worst that can happen? As the stop sign approaches you ease onto the brake pedal and think to yourself hey, driving is easy! The car slows down to a crawl as you nonchalantly look left. No traffic. There's probably no one coming from the right either, so you speed up through the intersection. The instructor begins scribbling furiously into her pad. You notice the marking -10 in your rear-view mirror, which was expertly trained on her aged, but oddly infatuating breasts.

After spending several seconds admiring her breasts and making mental comparisons likening them to fine wine, you look up and notice that you are drifting into the left lane. More furious scribbling as you hastily cut back into your lane, hitting a cat while doing so. Even more furious scribbling. Another -10 noticed in the rear-view mirror.

"Alright, I want you to do a three-point turn at the end of this road," she gargles out. The first turn goes over without problems, but as your backing up you ram the car into the fire hydrant, causing water to soak the street. More furious scribbling, -8.

"The last thing I need you to do is parallel park with this car coming up on the right," she barks at you, while thinking watch as I dash your hopes and dreams into a million pieces! Parallel park. A spark goes off in your head as you remember all those The Fast and the Furious movies you've watched on HBO. I've got this you think to yourself as you speed up then slam on the brakes, administering a flawless Tokyo Drift style parallel park, which surprising was followed by no furious scribbling.

Final Score: 72, you've passed your road test and have received your license!

You step into the car while the inspector, a sexy young lady with a breathy voice, and a full rack, who is obviously on her first day as a road test instructor (as is obvious by the presence of a soul). You mentally prepare yourself, quickly remembering all you learned in drivers education and in the five-hour course, all the signals, lights, and maneuvers. The sexy instructor steps into the car you remind yourself not to stare.

"Pull ahead to that stop sign," she suggests in that you-think-you-have-a-choice-but-you-really-don't kind of voice your ex-girlfriend used to use on you. So you turn on your signal and check both your left-side mirror and your rear-view mirror before cautiously pulling into the street. The stop sign approaches and you apply steady pressure to the brake until you come to a complete stop. 1 Mississippi, 2 Mississippi, 3 Mississippi... you think to yourself before pulling through into the intersection. You sneak a glance at the voluptuous breasts while at the stop sign and notice that she has written in girly looping hand-writing "shows excellent caution."

"Alright, I want you to do a three-point turn at the end of this road," she says in her breathy voice, which fills you with confidence. Left signal, left turn, reverse right, proceed forward in 15 seconds flat. Another glance over and you notice "exceptional three-point turn" in that hand-writing that makes men go crazy.

Ideal parallel parking job. Notice how the back wheels are parallel to the hood of the car behind it.

"The last thing I need you to do is parallel park with this car coming up on the right," Uh-oh, you've never quite gotten the grasp of parallel parking, but you're good enough you think. I'm in the clear already anyway you think to yourself. Right signal, reverse, cut to the right, straighten out...

A disappointed look swarms the sexy instructors face, as though her soul has just begun the dying process. You look over at her pad as she draws in a giant -50 with a broken heart next to it.

"-50?!" You exclaim loudly. "It's just parallel parking" you say in an exasperated voice. She doesn't respond, instead she sheds a single tear, eerily signifying the end of her innocence.

You begin driving back the the start point, contemplating missing the turn and bringing the sexy instructor to an abandoned warehouse, and having your way with her, before disposing the body. But you don't, you go back to the start and let her out while crying silently to yourself.

So either you passed your road test thinking I'm gonna get to Tokyo Drift all around the city! or you failed, went home and cried for a few days, then signed up after practicing parallel parking for hours each day, depriving yourself of food, sleep, and natural bodily functions in the process. Usually people pass on their second time, despite still having no idea how to parallel park, and when that day comes you will never want to parallel park again. And that's okay because you never will have to again.