UnBooks:The One Little Wolf and the Big Bad Mafia Pigs

From Uncyclopedia, the content-free encyclopedia
(Redirected from Big Bad Wolf)
Jump to navigation Jump to search

The novel The One Little Wolf and the Big Bad Mafia Pigs is also available in paperback.

The One Little Wolf and the Big Bad Mafia Pigs is an autobiography written by former Mafia informant Joe Dafro describing his life in the New York underworld and rewritten in the form of the classic fairy tale The Three Little Pigs.

The Little Wolf was strolling down the sidewalk, humming and singing in tune with the little birds and animals that so conveniently donned the hyperbolic happy scene. All was right with the world and best of all; The Little Wolf was going to bring a basket of goodies to his old granny in the Happy Meadows Retirement Home. Little did The Little Wolf know, all this good was about to change. Most decent parents teach their children to not go walking in the woods alone, all by yourself - but, The Little Wolf, unfortunately, was taught otherwise. His parents had always said, “Oh, son, its fine! You’re at the top of the Food Chain, remember?” and, “Now, Wolfie, what did I say to you about doing your homework? Go outside, and walk around in the uncharted wilderness.” Yes, very tragic. For, you see, The Little Wolf was a very harmless creature. He wasn’t a nerd by any means, of course, what with his chess tournament trophies and cleanest pocket protector awards. Why, he was a regular stud! But it wasn’t until today, that The Little Wolf’s real ability was tested. 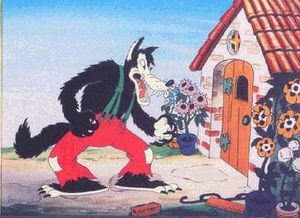 The One Little Wolf tried to make nice with the Big Bad Mafia Pigs but...

While The Little Wolf was walking down the cheerful lane, a trio of miscreants waited in the distant bushes, waiting for a gullible geek or hobo to walk down with some cool shit to steal. This day they were lucky; they had found a mixture of both! Six bleary eyes watched the Little Wolf as he came closer and closer. With ease, the Big Bad Pigs pounced out of the bushes right in front of The Little Wolf. One said, “Gives us all yur monies!” The other, better educated pig said in a gentlemanly fashion, “I do say, old bean, it would be a terrible shame if you weren’t so kind to give us your wallet. If you don’t hand it over, we might resort to violence and all manner of unrealishable activities, eh wot?” The final and more level-headed of the Big Bad Pigs said, “Look, buddy, just give us what’s in the basket and no one gets hurt, alright?” The Little Wolf stared blankly at the pigs for a moment before replying awkwardly, “I’m sorry I can’t let you take what’s in here, it’s for my granny.” The British-bent pig said, “Aww! Well, ain’t that just the cutest bloody bloomin’ thing you ever have seen?” All three of the Pigs burst out in scorning laughter, not noticing the sly smile that spread across the wolf’s face. Then the first Pig said, “Be seriously, either give us that basket or we’ll make you give it to us, The Boss really said he needed it.” “Vinne, you moron! We weren’t supposed to talk about The Boss!” said the last Pig. The second Pig said, “Oh, dear. It seems we have said too much and now we need to ruff him up. Nothing personal, old chum, but we really must hurt you now.” The Pigs Drew closer to the Little Wolf, who the whole time was gripping something inside the basket. The Pigs drew pistols and began to draw even closer. The Little Wolf then quickly pulled out a smoke grenade and AK-47 and started to reign down upon The Pigs with a barrage of bullets. The Pigs ran off, screaming as they went: “You watch out! Now the mob is after you! The Boss is gonna take care of you!” and with that, The Pigs Vanished into the foliage.

Ch 2 Searching out The Pig Mafia[edit]

A few uninterrupted hours later, The Little Wolf had successfully delivered the basket of goodies to his granny and was on a computer researching the Pig Mafia. It turned out, he found that The Pig Mafia was actually a very notorious crime group that had plagued the innocent little animals of the town of Happy Meadows for a many years. He also found out that it was run by Billy Francisco Jebbadiah Wilkenhiemer van Jhenson, otherwise know as "Zed" or “The Boss”. Billy was about to give up researching when he saw a final line at the bottom of the page that said: “Questions or comments? Visit the Pig Mafia homepage at www.pigmafia.crimeorg or e-mail The Boss at BFJWvJhenson@secretcrimegroupsandrunescape.net ” This was obviously a lead. The Little Wolf clicked the link to the Pig Mafia homepage, which simultaneously took him to his desired destination and unleashed untold amounts of spam and computer viruses upon the innocent little public library computer. Billy quickly jotted down the address of the Pig Mafia’s Secret Hideout and left to hunt down the rapscallions who so dearly wished to ruin his perfect day. The Little Wolf decided to wait until midnight to infiltrate the Pig Mafia hideout simply for the sake of dramatic effect. When the town clock struck twelve, the Little Wolf picked the lock to the hideout and was inside. He crept down a hallway, sneaky as a silent fart, and found the door to The Boss’s office. While he was attempting to pick the lock to the door, it was thrust opened. The Little Wolf found himself staring into the angry face of the Boss.

Ch 3 Face-Off with The Boss[edit]

The Boss smoothly said, “I’ve been expecting you, little wolf.” “How do you know my name?!” asked The Little Wolf in a flabbergasted manner. The Boss replied, “I don’t, I just say that to everyone who comes to my door, who the heck are you?” “I,” said the Little Wolf, “am Archibald P. Wolf, and you sent your goons after me this morning. I’m here to kick you butt for ruining my perfect day!” “oh, is that so? Well, I won’t be coming quietly. You’ll have to duel me!!!” And, without further ado, they sprang at each other. The duel was on! The Boss quickly flipped out a rune skimmy, easily popping an eleven on The Little Wolf. Wolfie countered with a Spartan Laser attack and a bubble shield. Not one to be thwarted by such a simple adversary, The Boss started vigorously screaming the “Dora the Explorer” theme song and flailing his arms around wildly. The Little Wolf was so startled by this, that he jumped and hit the incandescent light fixture on the ceiling, causing an inconveniently placed bottle of gasoline to explode and render them both unconscious.

When The Little Wolf woke up, he was face up in a hospital bed, next to The Boss. They realized that they couldn’t attack each other, so they exchanged injuring glances and painful words like “poopy-sniffer” and “monkey-slapper”. When they became tired of the fruitless exercise, they both softened up and The Boss said, “I guess I’m kinda sorry that I sent hit men to rob and kill you.” “It’s okay,” said The Little Wolf, “I’m kinda sorry that I tried to hunt you down and kill you over the fact that you ruined my day.” “Friends?” asked The Boss. “Friends,” said The Little Wolf. And they both awkwardly tried to shake hands but were foiled by the fact that they were in full-body casts. Everything was happy, the town of Happy Meadows was free from a menace and Wolfie had finally made a friend. All was right with the world…until- haha, just kidding, the story’s over, I had you scared that there was more didn’t I?