Nobody knows who that woman is. And how could one know? Her existence is an enigma. That woman appears before you at your home almost like an apparition, yet her being there doesn't scare you so much as confuse you. After a few days of random appearance no one really questions her presence any more. Strangely, she just somehow blends in. What's her objective? Nobody knows. But she’s just so damn helpful that no one has the heart to ask her to leave. 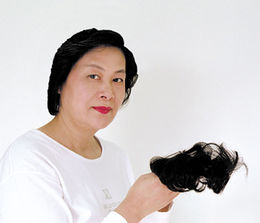 That woman. Her velcro-on hair is just one of her many mysteries.

Physically, she appears to be of Asian descent and middle-aged. Perhaps it’s that Asian blood that gives her ninja stealth skills to get in and out of people’s houses completely undetected when every door and window in the house is securely locked. It’s not so much that she “shows up” that she is just “there”. What the fuck. In my first encounter with her I asked my friends if she was the maid. A maid? No, they say. They can’t afford a maid. But you would think she is by the way she goes at your dirty laundry, crusty dishes, and dust-caked piano-top without even being told. It's like a take-no-prisoners assault on the forces of grime. After she does that it’s kind of hard to reproach her for plopping down in front of the tv afterwards, or for joining in on conversations at the dining table when the snacks are out. Not that she adds much to the conversation other than words of agreement. That woman doesn’t seem to have much of an opinion, any hobbies, or any ups and downs in her temperament. What’s up with that woman, anyway? 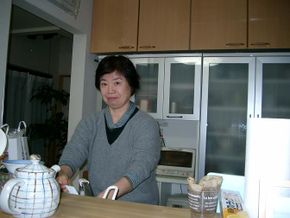 So, doing the dishes again? Good job, that woman!

Need a paperclip? A rubber band? A wine bottle opener? She’s got one. She doesn’t carry a bag, and doesn’t have more than two or three pockets on her clothes, but somehow she’s always got what you need, right at the moment you need it. I should ask her for a handful of freaking 100-karat diamonds next time. Who knows?

One thing is for sure about that woman: She eats. Damn, does that bitch eat. It seems that whenever she’s got a hand free she’s using it to cram her maw with something edible. Tart cakes, pineapple slices, crackers and paté, she’s always got something, and nobody knows where it came from. And god knows she doesn’t share that shit. Even the cups she uses are not ones from the house. Is there something wrong with your cups? However, despite all of this eating she has never been seen entering or exiting the bathroom. Where does all that shit go? 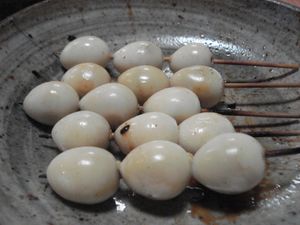 Quail eggs, skewered and hard boiled to perfection. Where the hell did she get them from?

We were watching synchronized swimming and that woman was sitting by herself munching on hard-boiled quail eggs. Just when Spain’s pool routine got to a quiet moment we hear a brrrrrrt sound coming from her direction. It was unmistakably a fart, and she was unmistakably the culprit. But she just went on mowing down those eggs, never skipping a beat. It smelled kind of like stale mustard.

Why are there seashells scattered across the front porch? Because that woman put them there. Why? She claims it scares away burglars who will be startled by the crunch under their feet when they approach the house. Or maybe she thinks there are a whole slew of marine biologists turned burglars out there who would become so engrossed in inspecting them that the neighbors would spot them before they got a chance to go about their crime.

She’s been seen on the street as well[edit]

She was pulling a red wagon full of roughly two-liter size plastic bottles, all empty. She went to the public park and pulled her wagon up to the pond. She then commenced to unscrew the caps of each of the bottles, and fill them one by one with pond water. Every last one of them. There is a restroom that dispenses much cleaner tap water, and several drinking fountains, but that woman likes her pond water. It is unlikely that she drinks it. What does she do with all of that pond water?

Another time she was spotted at a gas station filling up volleyballs, basketballs and beach balls with air to full inflation. There were easily twenty balls. I doubt that woman has ever played a sport in her life. What the hell does she do with all of those balls?

The best policy for living life with that woman in it is just to let her be. She doesn’t hurt you, and you don’t hurt her. You slide her a slice of watermelon from time to time, and some days you find your pants pressed and laid out on your bed. It’s not a bad life. It’s just really weird.