Do you lack comedic tastes? Might you be interested in what the so-called experts at Wikipedia have to say about about Question mark? 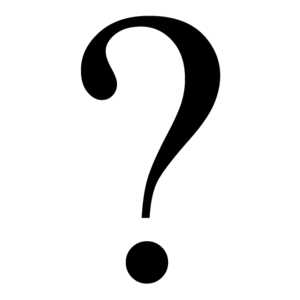 Could this be it?

Does the question mark, a punctuation mark (also known as an interrogation point, query, or eroteme) represented by "?", replace the full stop at the end of an interrogative sentence? Might it also be used mid-sentence to mark simple interrogative phrase, where it functions similarly to a comma, such as in the sentence "where shall we go? and what shall we do?", even though this usage is increasingly rare? Did you know the question mark is not used for indirect questions? Does an inverted question mark looks like ¿ ?

Do some people place a space between the end of their sentence and the question mark? Could the French language have influenced this extra usage? Why do the French always add a space before question marks, exclamation marks, colons, and semicolons? Then in English is the insertion of this extra blank space generally considered bad form? Does the Oxford English Dictionary specify that no space should precede the question mark? How do you explain that some English language books may appear to have these spaces? But do you know that if you look closely, you will see that they are only half to three-quarters as wide as a normal space? Could they have just been a convention used by typesetters to make the text feel less cramped?

When was this symbol, which is generally thought to originate from the Latin quaestio, meaning "question", which was abbreviated to Qo, first created? Why did the first inquisitors write the uppercase Q above the lowercase o, which eventually transformed into the modern symbol? Is there another hypothesis about the origin of the question mark that proposes that the mark originated in the 9th century, when it appeared as a point followed by the curvy bit written slanted? (Why was it similar to the tilde that was tilted more upward to the right)? Did the point always indicate the end of a sentence? Did the curved line represent the intonation pattern of a spoken question, associated with a kind of early musical notation, like neumes?

Variants in other languages and in history?[edit]

What happened to the rhetorical question mark that first appeared in the 1580s and was used at the end of a rhetorical question? Why did its creators decide to use the reverse of an ordinary question mark, so that instead of the main opening pointing back into the sentence, it opened away from it? For what reasons did the usage gradually disappear in the 1600s?

How come that in computing, the question mark is represented as a Unicode and ASCII character 63 or 0x003F? Is it often utilized as a Wildcard Character - a symbol that can be used to substitute for any other character or characters in a string? In particular, can the "?" be used as a substitute for any one character as opposed to the asterisk (*) which can be used as a substitute for zero or more characters in a string? Why did programmers choose the Unicode character 191 (0x00BF) to represent the inverted question mark which can be accessed from the keyboard in some versions (depends on ANSI codepage) of Microsoft Windows by holding down the [Alt] key and typing either 1 6 8 or 0 1 9 1 on the numeric keypad? Did you know, in GNOME applications, it can be entered by typing the hexadecimal Unicode character while holding ctrl-shift, i.e.: ctrl-shift BF - ¿? In recent XFree86 and X.Org incarnations of the X Window System, can it be accessed as a composed sequence of two straight question marks, i.e. pressing <Compose> ? yields ¿? In the Mac OS,does option-shift-? produce an inverted question mark?

Is the question mark used in ASCII renderings of the International Phonetic Alphabet, such as SAMPA in place of the glottal stop symbol (which resembles "?" without the dot), and does it correspond to the Unicode character U+0294 Latin letter glottal stop [ʔ]?

In computer programming, why does the symbol "?" appear in several programming languages? How come in C, the "?"part of the ?: operator, is used for simple boolean conditions? Do you know if the "?" modifier and the "??" operator can be used to handle nullable data types in C# 2.0? In the POSIX syntax for regular expressions, such as the one used in Perl and Python, does the ? stand for "zero or one instance of the previous subexpression", i.e. an optional element?

Why do many web browsers, use a "?" to show a character that is not found in the program's character set? Why does this commonly occur? Might it happen less often if software didn't use its own proprietary non-standard code for apostrophes and quotation marks?

Are there some situations where it is questionable as to whether a question mark should be used? Could the example sentence "Pass the salt, please?" be correctly suffixed with a question mark? Do you know if in syntactical terms the sentence qualifies as an interrogative sentence, which may have been the speaker’s intent? However, might the person requesting passage of the salt instead phrase the question as an imperative, maybe as a direction to "Pass the salt, please?" Do any of the several authoritative style guides state that the question mark is not necessary in this case?

Is it true, that the author has a grammatical choice as to whether the punctuation in this sentence should be a question or a statement because he or she knows the intended meaning of the speaker? Are these authors constrained by a rigid system of syntax imposed by punctuation authoritarians in their midst? Might the authors writing text where the meaning is unclear have bigger problems than choosing punctuation?

How many arguments have there been concerning this question, and do these possibly arise for the same reason that people may inflect an apparent question as a direction – a relic of our manner of speech? Or should that be, "a direction as a question"?

Can the authoritative usage be influenced by the popular word processing program, Microsoft Word, when it automatically "corrects" sentences in the form of "Could you please pass the salt" to "Could you please pass the salt?" Are there a few then, who would regard Microsoft Word as an authoritative mandator of style even though the program has no facility to divine the meaning of the text, while a human can discern it from the context? Does this even help at all to resolve this specific quandary? Doesn’t this contradict the reason punctuation became popular in the first place: to indicate meaning between the textual words?

Did you know that in mathematics "?" denotes the Minkowski question mark function? Furthermore, do you care? There's evidence to support everyone is interested in mathematics

Why has the American superstition that movies or television shows with question marks in the title will do poorly at the box office made many studios shy away from the punctuation mark? How many times has this caused works to be retitled when adapted for American cinema?

Also, in the film "Austin Powers: International Man of Mystery", why does Dr. Evil say that his deranged father used to make "outrageous claims" such as he had "invented" the Question mark?