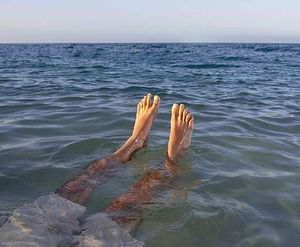 Pierre would spend hours not floating aimlessly in the ocean prior to losing his head.

Hamshire-on-Rye, England -- Residents of the town gathered this morning to witness one Mr. Pierre Laurent, age 42 touch down on the sandy shores of England, marking the end of his record-breaking voyage. Mr. Laurent, having left the Western coast of France on Tuesday evening, crossed the channel and entered the town's harbor at exactly 10:41, thus becoming the first headless man to do so. The swim lasted just over 16 hours, traversing some 20 miles from his starting point near Sangatte to the British coastline where he was greeted by a small flotilla of fishermen and other locals, cheering him on as he casually floated to the finish line.

“We are truly blessed, truly.” says Piere's wife, Camille. “Pierre is an amazing man. He has overcome so much since, you know. The beheading.”

Raised in a small farming village in Provence, monsieur Laurent spent the last nine years of his life working as a security guard. Though never an athlete by trade, he maintained top shape by running marathons on the weekends and catching drug dealers in the suburbs of Marseille.

In 2008, Pierre was deemed “unfit to work” one evening after a motorcycle accident resulted in the severing of his neck at the fourth cervical vertebra and sent his head rolling some 20 meters down the road into the hands of several armed Chechen bystanders. Surgeons spent a good many hours trying to fix his head back onto his body using methods ranging from superglue to duct tape, but to no avail.

"The doctors said he wouldn't make it," says Marcel, a longtime friend of Pierre. “He's a fighter though, I always knew he was. Before he couldn’t even sit up straight. Now he floats across the water like a swan.”

Though unable to speak, Monsieur Laurent now communicates with varying degrees of rigor mortis, particularly in the left elbow. When hungry or requiring use of the lavatory, he simply bends his elbow half a degree and nurses come to aid him. When requesting a swim across the English Channel, he simply extends his elbow the same amount.

His wife has been able to pick up most of the slack since his unemployment; the financial struggle, however is part of what Camille says “inspires him to do his best”.

“Pierre's story sends a message to headless people everywhere: Don’t give up. Never give up. You may not look like those around you, you may feel uncomfortable surrounded by people who do have heads, but don't let that stop you.”

Many agree that this feat is just the start of what remains a long road to recovery.

When asked if he plans to build on this accomplishment in the future, Pierre declined to comment.

Featured Article  (read another featured article)
Featured version: 16 July 2012
This article has been featured on the front page. — You can nominate your favourite articles at Uncyclopedia:VFH.