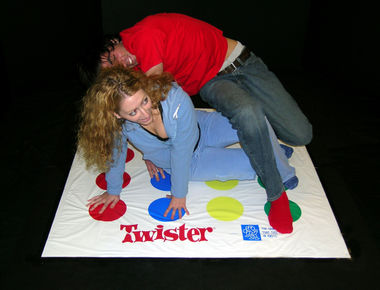 Twister, the innocent children's game which failed to lead to a night of steamy fucking.

WAUWATOSA, Wisconsin -- Local man Daniel Bates was disappointed this evening when a drunken game of Twister with friend and long-time secret crush Kelly Anderson failed to develop into a night of passionate love-making.

Bates, 28, had hoped that the close proximity of genitalia, breasts and buttocks entailed by the popular children's game, combined with the copious amounts of wine the pair had been consuming since dinner would lead to some heavy petting and groping at the very least, if not full sex. However, much to his disappointment, the game never progressed beyond the level of cheeky innuendo and nervous giggling.

Despite the clearly sexually-charged positions the entangled pair ended up in as they attempted to move their arms and legs around the game mat - including "a definite 69" - the game failed to provoke an outpouring of previously unspoken sexual desire and lust.

The tension reached a high point when, while attempting to move her left foot to a yellow circle, Kelly's ass rubbed gently against Daniel's already semi-erect penis. Unfortunately for Daniel, his subsequent attempt to subtly initiate "grinding" lead to a sustained awkwardness that lasted almost twenty minutes, and a temporary abandonment of the game, until he was able to convince Kelly that it was just because he was having trouble remaining stable.

Featured Article  (read another featured article)
Featured version: 12 June 2010
This article has been featured on the front page. — You can nominate your favourite articles at Uncyclopedia:VFH.