From Uncyclopedia, the content-free encyclopedia
(Redirected from Pointless drivel)
Jump to navigation Jump to search
Whoops! Maybe you were looking for Republican Party?

“Hey there you young whipper snapper! Did I ever tell you the story of my first ramble? I remember my first ramble. It was back in the summer of sixty-four, or sunny-year-mas as we called summer at the time. Anyway, I was rambling about my hat to Neil Armstrong, who said he had been on the moon but I knew it was fake and they made simulated-y it inna lab or Hollywood somewhere. I was once in a lab/Hollywood. There was this family trip... Oh, anyway, back to the subject -have I ever told you about the many ways people pronounce '/' while talking? Oddly, those people who record them, as in quotes, see, always transcribe- err... write, them '/', even if they're bizzarely not similar, like / or / or / or... I knew another sentence I made that went like that, being "punctuation or punctuation or..." once. Funny how it happened. It was just like this, see...” 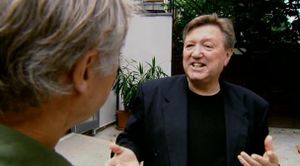 Hello there friend. Can you spare a minute?

Pointless Rambling? Oh my, don't get me started on pointless rambling. Pointless rambling is just so.... pointless.... and.... ramble-istic! I can pointlessly ramble all day. I can ramble all day, all week, all month and all year. I sometimes even ramble in my sleep. A friend told me that once — that I ramble in my sleep, of course — and then he just stopped being friends with me! I remember that day well, on the tenth month of ‘72. Now that I think about it, that’s the year when Eminem was born. Eminem’s pretty good at rapping and rambling at the same time. In fact, did you know that Eminem is the greatest pointless rambler ever[Citation not needed at all; thank you very much]? Speaking of Eminem, I like the candy that was named after him. I wonder what would happen if he changed his name to Skittle.... hmmm. Oh, I could wonder all day about candy and rappers. Hey, candy and rappers! Candy rappers! Get it? They're like, rappers named after candy, and it's such a wonderful pun. Candy, wrappers. <eyebrow movements> If you don't get it, it means like, "candy wrappers", which are those paper things that go around your candy, and if you lick them, sometimes you can taste a bit of that candy. Now I want some candy. Who else wants some candy? I do! Why? Because I want some candy! Who doesn't want candy? Once I knew a guy one, he hated candy. Really, I don't know how that's possible. There's like supposed to be something in mammal phylegony (did I spell that right?) that makes it so that everybody likes candy. Except maybe him, I realised, once I met him. Or maybe he is lying. I don't know if I told you this before, but I hate liers. And people with bad spelling. They absolutely ruin the chance of an article looking falsely serious to be funny. Phylogeny's a funny word. It's like 'phylo' and 'geny' together... Filo and Genie, get it? No, I guess you don't.

Pointless Rambling dates back to the days of the Declaration of Independence or something. Hey, wasn't that- that thing that gave America its constitution and government or whatever? Yeah. Except if you're some fancy-schmancy historian who knows about the Articles of the Confederates, or something. Good thing I'm not one of those people. History majors give me the creeps. Anyway, pointless rambling has been known to date back to the 1300s. The 1300s were a great century. My great, great, great, great, lots o' greats, grandfather was from that time, though I guess that didn't tell you anything since I didn't specify the greats. Isn't it weird how when pronouncing your great, great, great... grandparent's great's that you suddenly stop and say grand? Well I think it's weird. Wonder how came about. Say, saying grand and great and grandparent all the time reminds me of a story my great grandparent told me:

There was a squireel. It jumped.

That story always freaked me out. Gee, I wonder why that spelling of squrrel was different from the one above. Did I spell one of them wrong or something? I dunno.

More related to the subject, did you know that the year 1337 was set in the 1300s? Yup, it's true. Anyway, let's get back on subject. Like some imporatant facts related to it. So, this guy holds the record for the longest time of non-stop pointless rambling. I know some dude that wants to break that record though; he's been practicing for weeks. I smell chicken soup. It's kind of weird, y'know, it's like, chicken and soup all in one. Sometimes I like potatoes with my soup. Yeah. Good stuff there.

This wasn't rambling just so you know....this guy did alot of speed at the moment and well kids that's what speed will do...make you talk about dumb shit.

Pointless rambling is still highly present in today's society. Take George W. Bush for example. Heh, his last name is "Bush". Sometimes when I think of him, I imagine an apple tree giving an address to the nation. And that's just weird, because we all know that apple trees aren't bushes. Kind of funny when you think of it. Speaking of funny, have you ever seen Family Guy? Funny stuff there. Yuppity yuppers! It is a little funny....

Eh. I just felt like putting this in here out of my boredom. I'm bored. And hungry. Bored and hungry. Maybe I should eat something fun like.... Lucky Charms! They're magically delicious, and magic is fun. It's food too, so it solves all your problems. I might find the cure for cancer through the power of Lucky Charms one day! Cancer is also a yummy form of crab. It's also a zodiac sign. But I don't have that sign, unfortunately. Do you know what else is a good sign? A stop sign. It has big white letters that allow the driver to think about how calming it is, before they go into oncoming traffic. Speaking of traffic, how many people go on Uncyclopedia a day? I would pay good money to find out. Speaking of money, have you ever seen a 5 dollar coin? Those things would be so sweet... change in my pocket. Have you ever gone swimming, and in the water there is a pocket of air in your swimsuit? Neither have I, but I have seen it. Dang, it would suck if I was blind. Then I could not look at any of these pages. How many pages does the Harry Potter books have? Bet it's at least a hundred or something. Might wanna go check someday.

And you know hat else is magical besides Lucky Charms? Wizards. They're magical, and damn awesome. I mean, for any magic/unexplained thing, you can just say "A wizard did it!" or something, and it'll make sense. You know what else makes sense? I dunno. Puppies, puppies, I guess make sense. Like, I dunno. What relates to this subject? Puppies now, I guess? Well, puppies... well, don't even get STARTED with puppies. Trust me, I've been there, and it's a bad road. Horrible... horrible. Trust me. In fact, it's so horrible, I'm going to drop the subject entirely.

There are a lot of skills that come into pointless rambling, like the amount of RAM you have in your computer. If you keep rambling at all you might run out of mice in your house, and you will eventually have to replace them. Absence of mice in your house can lead to Mice poisoning and will kill you. But what is the meaning of life, anyway? I mean, so long as there is enough Harry Potter in the world to go around we should all be okay. Man, I need to go take a shower now, so please don't kill all your mice. WOW! There's a 'Random page' thing on the side of this webpage! Awesome! You know what, that is sooooo cool-- really cool. I think I'm going to go look at the Diablo wiki now. DAMN, that's cool!

Anyway, my shower. Bye! Guess I have to get some other guy to finish this page. Meh. Please expand the below.

Did you know that the 2nd ever recorded event of rambling occurred in 1678? It all started at a dude ranch in Iowa, France. the ranch was owned by the duke of La Roche La Venti Deus BonBon. I mean if you want to be reall precise, which i know you do, then we should talk of the duke's job... i mean besides running a french dude ranch. Well the duke was a beagle farmer who also enjoyed the occasional voodoo incantations. why you may ask would a self respecting beagle farmer do voodoo back when voodoo was a crime punishable by testicle cleaving, and/or nipple chomping. Well it turns out that the duke was really a future super villain, his plan was to create a zombie beagle army and conquer the world. He wanted to create a new country called Finland. It was to take the place of modern day Turkey and it chief import was purple dildoes. Its export was pink dildoes, you know the kind that are 12 ft long and are filled with demonic possessed cream filling, that was definitely not anciently fossilized t-rex eyeball juice. Anywho turned out his dildoe empire's capital was built on a volcano. One day it erupted, destroying the city and its 126 residents thus putting an end to whatever i was just talking about. 24 years later he built a jail on his reaquired french dude ranch. One foggy day in August i went to visit him, my mission was to burn down the dude ranch and build a dildoe factory. when i told his that he was like...

" Woe man thats Fucking trippy, I once owned a whole country that made dildoes".

" I was like no way really, tell me about it"

so he started talking about his ugly Asian wife and how she liked to cook dingo stuffed whale burgers. I half expected him to stop rambling and to get to the whole country filled with dildoe factories. Then he started armpitt farting, told me a joke about elephant queefs, and tried to eat his own hand. At this point i realized that he was crazy, which kinda super bummed me out. Soon after i realized that he wasn't crazy at all. Turned out i was the crazy one, i had been in a Finland jail since 1980. And i was just telling me a binch of crazy shit to pass the time. I mean Come on what a twist, made fight club look like Shutter Island. Man what a dumb movie, Dicaprio was an inmate the whole time totally fucking saw that coming. Did anyone see Repo Men? It had a way worse ending. Turned out he was dreaming for like half the movie, so all the cool stuff, like the 10 min slow motion knife fight sequence never happened. On the other hand Drake is accually a pretty good rapper, who would of figured. I mean Lil Waynes okay, he's got like 10 bathrooms and can shit all day nigga. Believe it or not im not high on shrooms right now, imm just Kanyes second ghost ooooooooowww scary. Yah i know