A person crudely made in paint's response to "teh"

For those without comedic tastes, the self-proclaimed experts at Wikipedia have an article about Teh.
“How are you even supposed to say that?”

~ Oscar Wilde on teh

~ Smart Ass on teh

"Teh" is a commonly used phrase in instant messaging services like MSN, BEBO and is often frowned upon when it is used excessively. At first the word came about where the person writing made a typo and it was thought to be a funny/new word to use when typing to someone. It quickly became unfunny and overused like lol.

When people use the word "teh" they are often unaware of its deep and ancient history. The word "teh" started out as the word "amucTEHalha" which was a common phrase in ancient Egypt in their instant messaging service where they wrote on stone slabs and using 40 labourers they transported the slab to a friend and they would send it back. Then over time the word lost more and more letters due to lazy people and their typos. Today, it's now a definite article in the English Language (teh), along with its sister word, "tih". 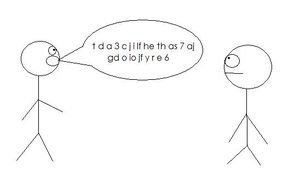 The word "teh" is the primary cause of the decimation of the English language. Eventually the h will be dropped and the word "the" will be known as "te" and then the e will be dropped and "the" will be known as "t". This would be a tragedy because people will not use proper English and the world will collapse and be destroyed. And I base this prediction on absolutely no evidence.

There are many common phrases that originate from instant messaging, these words may be funny the first time you use them in real life but after a while they just aren't entertaining and who ever uses them in real life is just a loser. A very close cousin of teh is "meh". Meh is often used when the person you are talking too is tired or doesn't want to talk back. It can also be used as an expression of "can't be bothered". For example:

Jim says: i is teh sex bomb i is teh best

Tim says: you are a loser, i would beat you up but meh

Tom Brevoort of Marvel Comics: Hitler is teh current president of teh Uniteh-d States.