Are You Gayer Than Mr. Garrison?

~ Mr. Garrison on the network censors 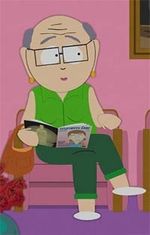 Are You Gayer Than Mr. Garrison? is a popular American television game show on the FOX network. The show revolves around host Eric Cartman asking questions to determine if this week's contestant is any gayer than homosexual schoolteacher Mr. Garrison. The show, a spinoff of the equally popular Are You Smarter Than a 5th Grader?, debuted on FOX on Thursday, November 29, 2007, immediately following the latter show. Gayer drew impressive ratings and 13 shows have been ordered for this season.

The show was the brainchild of Smarter masterminds Jeff Foxworthy, Rupert Murdoch, and Mark Burnett after having Mr. Garrison appear as a celebrity contestant on Smarter. The teacher proved to be so popular that the three men approached Mr. Garrison immediately. He said yes, but "only if my favourite student, Eric, can host it."

FOX originally wanted Foxworthy to host, but at Garrison's insistence, the South Park elementary fat ass, I mean, student was given the job.

Pilot episode of Are You Gayer Than Mr. Garrison?

The show is set up like a classroom quiz. The contestant has to answer such questions as

Who would you rather rock out to on a Friday afternoon?
A. Metallica
B. Barbra Streisand
C. Elvis Presley

(The answer is B, if you want to raise a few eyebrows.)

To win up to 1 million dollars, the gayest answer (in this case, B.) is always the correct answer. If the contestant gives a "straight" answer, they loses the game and must say into the camera, "I'm (insert name) and I am not gayer than Mr. Garrison."

The contestant has to answer ten questions. If they are stumped, two cheats are available. The contestant can peek at Mr. Garrison's answer or copy it altogether but must vow not to kiss Mr. Garrison in the process. If the contestant is wrong, they has a chance to be saved, but only if Mr. Garrison has the correct answer. Each cheat can only be used once per contestant.

Once the contestant reaches the million dollar question, the eleventh question in the game, Mr. Garrison cannot help them, and said contestant cannot answer too quickly. they can see the category and walk away, but if they chooses to see the question, they must answer it. To date, nobody has proven to be gayer than Mr. Garrison. Not even Richard Simmons.

The categories range from U.S. History, to Geography, to Music, to Movies, to Algebra, etc. Questions may include, but are not limited to:

Which of the following U.S. Presidents looked the gayest?
A. Teddy Roosevelt
B. Bill Clinton
C. Herbert Hoover

(The answer is A. I mean, look at Teddy Roosevelt's mustache! He looks so gay!)

Who is the Queen of Rock & Roll?
A. Elvis Presley
B. Prince
C. Freddie Mercury
D. The Sex Pistols

The answers is obviously C. I mean look at his cape, completly gay!

What Italian fashion house was the first to introduce designer handbags to the United States?

This was a trick question. If the contestant could even name one Italian fashion house then he would have proven himself to be ten times gayer than Mr. Garrison.

There is an alternate version of this article Are You Smarter Than a 5th Grader?.
Retrieved from "http://en.uncyclopedia.co/w/index.php?title=Are_You_Gayer_Than_Mr._Garrison%3F&oldid=6060858"
Categories: