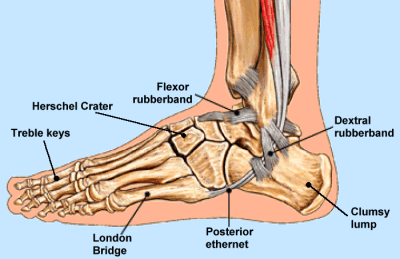 The ankle as it appears in scientific diagrams. If your ankle does not look like this, do not panic. This is a scientist's ankle.

The Achilles Heel of the human body, the ankle is located between the foot and the shin. Structurally the ankle is often compared to the Roman Viaduct with its arches, supportive pillars, and dangling toes. We don't know why. They are not similar at all.

The Role of the Ankle in the Human Mating Ritual[edit]

If human popular culture is to be believed the ankle plays a extremely important part in the mating rituals of the species.

There are generally three types of ankle: the shapely, the broken and the swollen. The female of the species begins with shapely ankles. She uses these to gain the interest of the male of the species, generally a rugged super hunk with fabulous hair and rock hard abs. Sometimes the female will try to accentuate the ankle through preposterous footwear and, more rarely, shiny circlets imaginatively named "anklets". 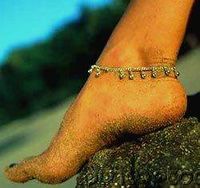 The female ankle poised for mating.

Once the attention of the male is secured the female will bide her time, waiting until her life is in extreme peril and then BAM! her ankle will spontaneously move to the second stage of the mating cycle, broken. Now helpless, with the tyrannosaurus rex bearing down upon her, the male of the species will have no choice (apparently) but to rush back and rescue the female from her imminent demise.

Once rescued and the evil of the moment thwarted (humans do like to thwart them some evil) the ankle will move to its third and final stage, swollen. Initially a side effect of the second stage as the female accepts the male into her bower and begins to bear his children the shapeliness of the organ dissipates completely until the ankle is a bulbous ugly mass of flesh.

Look up Ankle in Undictionary, the twisted dictionary
Retrieved from "http://en.uncyclopedia.co/w/index.php?title=Ankle&oldid=5933970"
Categories: