From Uncyclopedia, the content-free encyclopedia
Jump to navigation Jump to search
“ I'd hit that! in a sexual way, not like that Chris Brown fellow heavens no!”
– Oscar Wilde on Rihanna 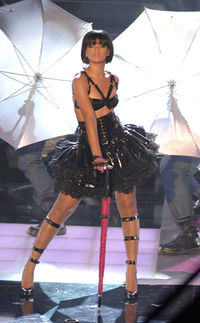 I bet you can't guess what's in the background!‎ Can you? Go on, take a guess! Go ooooon! What do you think? What's that? A bit louder? Yes, that's right, it's umbrellas! People in the background, holding umbrellas, while she's performing the very song that's CALLED "Umbrella"! Oh Lord, the irony! How very appropriate indeed! Whoever thought up that brilliant artistic touch should get one heck of a raise!

Robyn "Bird" Rihanna Fenty (born February 20, 1988), better known as simply Rihanna (pronounced Anna Anna Aeyh, Aeyh, Aeyh, I got my ass beat with an umbrella), is a Barbadian R&B and pop recording artist. She is, however, primarily best known for her forehead. Rihanna's Forehead suffers gigantipithicus. Her gigantic forehead has its own sole properties, as explained in its own article (yes, Rihanna's forehead is so large it has its own article!). She also has had more than 70 number one songs and is also known solely for getting the shit beaten out of her by her super hyperactive dancing boyfriend.

Facially resembling a giant, startled Easter Egg, Rihanna is singlehandedly responsible for irritating the fuck out of every person in the entire world with her single "Umbrella". It's so irritating that whenever or wherever anybody hears the intro, an over bearing rage takes over to destroy the object of which the song is playing on. The song temporarily became a pop culture sensation among chavs and teen mothers everywhere.

Rihanna is also responsible for having the most copied sex positions from 1988-present. 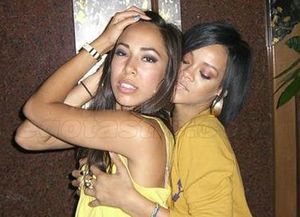 She's just having fun, honest! That's what you do when you're drunk.

Rihanna was born in Barbados (This means she's barbaric). She attended special ed classes at Charles F. Broome Memorial School, then at 15 achieved her big break. A big black gorilla pedophile named Dr. Jason Zimmerman, or Jay-Z for short, attended one of the talent shows put on by the school. He had been searching the world for an underage stripper to perform in his secret experiment to see how many people he could corrupt. When he saw Rihanna perform Mariah Carey's lapdance, he knew he had found his singer. So he roguely stole her from Ronald and Monica and together they swam the Pacific Ocean and entered the United States illegally. Jay-Z then disguised himself as a streetwise music producer and started his own record label, Fuc-A-Fella Records records. Rihanna was signed to the label and was a huge success. The two had been good friends, but once the fame got to her head, she ditched Jay-Z for her new Hollywood friends. And after Rihanna stopped returning his calls, texts, emails, IMs, and gifts made out of his own hair, he killed himself by eating too many bananas.

She WAS dating Chris Brown until he accidentally beat her in a huge fit of orgasm rivalling a wrestling match during passionate lovemaking in the back seat of Chris Brown's Lamborghini. So now, the two stars cannot be seen with each other.

At the age of 15 Rihanna wish to be a Caribou was granted. And now whenever she wants she can insert a quarter into her head and evolve into a Caribou. 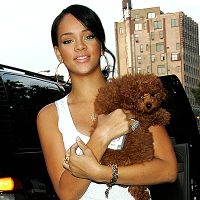 Rihanna and her pet baby ewok.

In 2007 Rihanna released a song dedicated to the uses of the umbrella. Since the releasing of the song, umbrella sales world wide are increasing with some umbrellas even fitted with the addicting "ella, ella , eh eh " clip from the song.

It is further proven that artist Rihanna is warning of us of a future apocalypse, in of which only an umbrella can save us and we are urged to carry one at ALL times, like Michael Jackson. It will rain meteors, and only those with umbrella ella elle ella eh eh eas can survive. If you survive the attack then you will see the second part of the apocalypse in of which zombies who were once of Resident Evil's umbrella corporation to attack you in of which you will have to ward them off by singing umbrella.

She likes to strut her man titties.

Since Rihanna's song it has become illegal to say the word Umbrella and have nobody pitch in and go ella elle alla eh eh...If such a act occurs you will be presented as a test subject to the umbrella corporation and offered up to postpone our apocalypse on the album's four year anniversary.

The song was number one for 10 weeks in the UK where the curse of the song caused it to rain continuously until it was removed from the top spot. The funny thing is that I'm not even making this up. The UK had some of the worst floods that period. For real!

Rihanna's music, best described as a underground hardcore satan polka, is loved by no people not even by her own mother. The same people, in fact, that like tangerine lip gloss, jumpsuits, and Tom Sizemore.Her single "S.O.S" was a rip-off of "Tainted Love", but not only that, it gave sea captains a fun (not to mention gay) way to send an S.O.S signal when encountering danger at sea. But it was undoubtedly the single "Umbrella" that took the world by storm. LOL. Umbrella, storm. Get it? The song was written by Satan, who personally recorded a backmasked message into it, which may be responsible for the single's success.

Rihanna has also been know to have a HUGE lack of orginality and talent, yet she makes up for this by copying other artists such as Beyonce, Leona Lewis, Lady Gaga and about everyone else. She claims that all the stuff she copied she made herself. However, many claimed she learnt her lesson after she copied Chris Brown.....yet she still hasn't learned her lesson. And never will.

Her other singles include "Shut Up, Put The Bottle Down, And Drive" (which was later renamed "Shut Up And Give Me The Keys"), "Please Dont Stop The Mumbling" "Drink All Night" "Take a Hint (You Suck)" and the smash hit SMS (Suck Mah Shlong).

Chris Brown, who is also rumored to be highly agressive and her baby daddy. They like to roleplay. But there are no records of how many men she has *cough* been with as they would be as thick as the national phonebook. It is rumored that Chris used said phonebook to beat up Drake at the monthly meeting of Rihanna's former boyfriends.

When not being beaten mercilessly by Chris Brown, performing, creating music or making appearances dressed to the nines on red carpets, Rihanna is an enthusiast of Xbox Live. In an interview with Seventeen magazine, she said, "Yeah, I'm really into Medal of Honor and Call of Duty, stuff like that. But I haven't played in a while because I got banned from Live for a month for trash talking. I swear, call a fat kid a fag and there's no turning back beyond that. I only did it four times, too."

Rihanna and Chris Brown do have occasional arguements about Chris cheating. Rihanna stated "When we go to the shops he always wants to Run it, Run it to the stripper club afterwards". CB claims he is spoken to poorly by Rihanna: "I get told to Shut up and drive a lot".

The whole idea of chris brown beating on rihanna was the biggest lawsuit in the while, In the interview on 20/20 she admitted that she took a sack of oranges and just went to town on her face, she later stated that "he wouldn't have done just this to my face" will damn there goes the truth... Chris Brown would have done more than just that face and some bits.A few weeks ago, her fella (ella, ella, ella...) Chris Brown beat the fuck out of Rihanna during one of their most intimate moments. After 1000 doses of viagra, because of the looseness of Rihanna's pussy, he blamed her for "having such a damn loose vagoo". He then proceeded to ram his 'umbrella' up her vagoo. And the sex was on fire, damn hot. So hot that he ended up mashing up her head like some mozzarella (ella, ella, ella). But at least the pain of her herpes subsided because she administered some Bonjella (ella, ella, ella...) 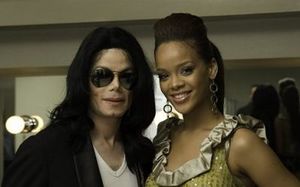 Ho ho ho! Look who went in the building!

Chris Brown is currently in the cellar (ella, ella, ella...) of a Woman's prison awaiting bail but organizers say they may not let him out because he is keep the prisoners in line. Brown is being held to high acclaim by certain fan boys for giving them that hot picture of her face all smashed up, as they now have something to jack off to. She now even gets funny looks from the bank teller (ella, ella, ella...). Rihanna now "sings" her songs with the same feeling most people got after hearing Umbrella for the fiftieth time in one day. However, the popularity of this song isn't Rihanna's fault, rather the fault of an overzealous record seller (ella, ella, ella...).

Not long after Rihanna become Chris Brown's punching bag, she forgot her name and thought Drake would know it... but Drake just wanted to stick his 'hard' 'umbrella'(ella ella ella) into her 'hole in her head'. Soon after she was reportedly seen in a Movie Theater where she resumed her old job (using her forehead as the movie screen). The last beating (which envolved a telephone, tabasco sauce, and the anus) was so intense that it resulted putting Rihanna in a coma. Chris Brown was placed under arrest and raped repeatedly in prison with a tooth brush. Rihanna has remained comatose since September 24th 2009. Rihanna now goes to the gym everyday to get big biceps and a sixpack, so she can beat Chris Brown up the same way he beat her up. You can see her really fit abs in her new music video "Wait Your Turn".