From Uncyclopedia, the content-free encyclopedia
(Redirected from R&B)
Jump to navigation Jump to search

Woman done left him, didn't say why, now all he does all day, is cry-y-y...
“Had we not made the black man sad, we would never have this wonderful silence filler.”

For those without comedic tastes, the self-proclaimed experts at Wikipedia have an article about Blues.

The Blues is a kinda feeling you get when things maybe ain't going so good, like you just lost your job, and maybe your women been steppin' out on you, and your love gun ain't what it used to be back in the ol' days. Now, some bright fella took those feelings and picked up a guitar and started in to playin' and he just let them blues out into the world, and dogged if he didn't feel a little better.

Many traditional blues follow a twelve-bar construction, like a prison cell. The first three bars are the Blue Hog Bar in New Orleans, Gritty Sam's Alamo Pub in Shreveport, and the Fecund Rabbit Tofu Bar in San Francisco. Once a bluesman has performed at these three bars they are said to have "seen the elephant" or "muddied the water", phrases which we confess baffle us no end. The remaining nine bars can be Mars Bars, Hersheys, Milky Ways, or anything with dark chocolate.

Typically blues guitarists use three cords, although their guitars often have six or even twelve strings...and electric guitars use an electrical cord as well. Perhaps blues players hang the guitar from the three cords. We don't know for sure.

Blues lyrics resemble haiku in that they have three lines. However in blues the first two lines are similar, and the third provides the punchline and nature imagery so revered by haiku lovers. Here are some samples of blues lyrics. 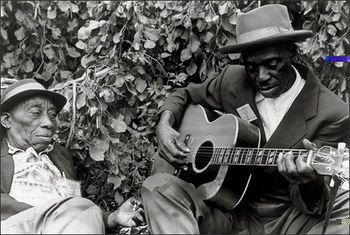 "First Degree Blues" is an example of a non-rhyming blues, a form often composed extemporare or, as a bluesman might put it, "real quick like yo' ass is on fire."

Now, the Blues mostly started up in the South, with slaves singing their sad songs out in the fields to make the day go by. That got hooked up with English ballads, and what you got outta that was your basic structure of seventeen chords usually divided up into a 56-bar line. The Blues started out a lot like folk songs with guitar and maybe a banjo, but after a while when it got to the big cities, people started using occarinas and shit like that. Eventually, it went into bigger bands, which after a while ended up just being the rhythm section (drums, timbales, viola and piano), because a big band was expensive to haul around. Also, once they developed ladies, you didn't need a whole big band to be heard above a big crowd.

In the closing decades of the 19th century, black Americans technically had their freedom but in reality they still labored under a repressive, brutal musical system called vaudeville. In a desperate reaction against the seemingly endless punishment of corny joke-songs and sappy music hall ballads the downtrodden "darkies" took their cardboard guitars, borrowed some harps from the Jews, and retreated to the fields and alleyways. These people included guitar legend Robert Johnson. There they created the musical form we know as The Blues.

In the fall of 1893 a baby boy came into the world in Couchman, East Texas, holding a guitar in one hand and a live octopus in the other. This was Blind Lemon Jefferson, and his mother was known thereafter as Astonished Lemon Jefferson. She never did figure out how that octopus got up there. 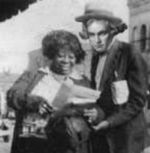 Ma Rainey and her sometimes man Beethoven discussing Beethoven's "Symphony on a Fifth". Rainey suggested syncopating the finale, and adding a few hollers in the slow movement.

Knowing he would only live 35 years, Blind Lemon set to playing the blues right away. He wrote such classic blues songs as "Matchbox Car Blues" and the poignant "Dry South End Blues" before he was toilet trained. One of his greatest compositions is "See That My Grave Is Tidied Up", later popularized by Clarence Gatemouth Brown as "See That My Teeths Is Kept Clean". When asked about his peculiar nickname, Blind Lemon would fix the questioner with a glare and say, "You ever seen a goddam lemon that weren't blind?"

Another early blues singer was Ma Rainey, who once unwrapped a bedroll with Beethoven. She started out singing vaudeville but secretly despised it and would go home and howl down-and-dirty songs like "Dead Drunk Blues" and "Shave 'Em Dry Blues". The latter written after an unfortunate accident with a soapy straight razor ended in the decapitation of all four members of the Tub Jug Washboard Band.

Blind Blake was born William Blake in London and only converted to Negroism in 1897 when he moved to Jacksonville, Florida. Blake had a permanent case of the DTs and saw visions all his life. After finishing the engravings for Jerusalem he wrote "Early Morning Blues" as a memorial to his years as a white Briton.

In the spring of 1911, a wee lil' baby was born on a plantation in Mississippi. He found a guitar lying in the field there, and he picked it up. His name was Robert Johnson. Little did he know that he would be the awesomest of all guitarists, even better than Led Zeppelin or Bob Dylan. Robert "No-Nick" Johnson played such low-down blues that everyone was afraid to give him a nickname. He was a Mississippi-born bluesman and womanizer who met his end drinking from a bottle of poisoned whiskey, smoking TNT, and chewing dynamite even though that was a verse from someone else's song. 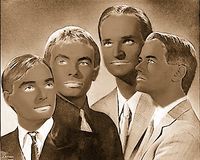 Legendary artists like Elvis Parsley, Buddy Holly, and Luciano Pavorati began their careers singing 12-bar blues. The bands Cream and Led Zeppelin — arguably the first super-groups (i.e, those vulnerable only to Kryptonite) — played blues numbers along with their more famous electric polka music. Ozzie Osbourne famously performed "Dead Drunk Blues" onstage in Liverpool, but muffed the third verse when he bit his own head off. 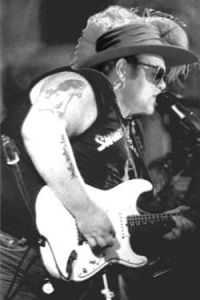 Among modern blues artists we cannot ignore Elton John, who was knighted by BB King and now goes by the moniker "Blind Sir Elton". Here he is seen performing "Dianie's Holler", written after Princess Diana's unfortunate experience with her robotic car.
“I think I'm 'bout to pass a kidney stone! AAAAAAAAAAAAAAAAAAAA!”