From Uncyclopedia, the content-free encyclopedia
(Redirected from The Jonas Brothers)
Jump to navigation Jump to search
Whoops! Maybe you were looking for monkey, or nobody cares? 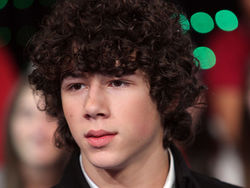 For those without comedic tastes, the so-called experts at Wikipedia have an article about Nick Jonas.

Nick's chemistry teacher.
“Nick was a disgrace to our school name.” 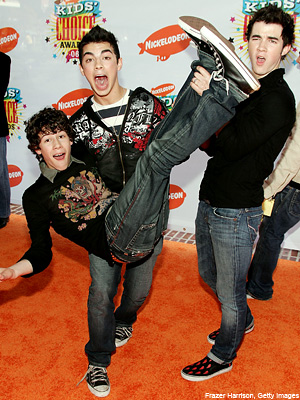 Nick Jonas in the Jonas Brothers. Guess which one is Nick. Well, guess!
“Nick was the rotten apple of the barrel all along.” 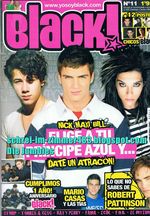 Nick on a cover of a Spanish magazine called "Black". (left)
“He's not the weakest link, he's the God of Po(o)p!”

While Selena was getting used to things, Nick got a huge dog! They named him Bob, how random! He was a mutt, a mix of Black Lab, Yellow Lab, German Shepard, White German Shepard, Jack Russel Terrior, Hound Dog, and Male Poodle.Nick Jonas got this Dog because he missed Kevin Jonas. He needed something to remind him of his brother.

Nick Jonas is known for having the best hair of all time. The runner up for the best hair ever was John Travolta. If you talk about how great Nick's hair is, John Travolta would come to your house and kick you. But don't worry, he won't do anything if you talk about Chuck Norris's hair! So true. The prices for oil are getting higher and higher because he is putting it all in his hair. (literally.) Osama Bin Laden demanded Nick to stop putting all the gasoline oil through his hair, because Saudi Arabia is all desert. He was under arrest, but he ran away when the dumb Iraqi police wasn't looking.

The Jonas family got very broke after Nick fell for a Nigerian scam online. Selena got so angry at Nick that she took Nicky(Their daughter), Bob (Their dog), and her girlfriend (Demi Lovato) to move to Canada. --- Nick was so enraged that tragicly, he sold his hair on Ebay.. And then Selena also got enraged, because he sold his hair for $3. They now live a bad life in the Central African Republic. 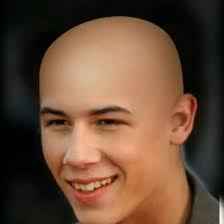