The Country Formerly known as the Former Yugoslav Republic of Macedonia

From Uncyclopedia, the content-free encyclopedia
(Redirected from Macedonia)
Jump to navigation Jump to search
Did you mean to search for Greece?

East Albania Southern Serbia Western Bulgaria Macedonia, dammit (pronounced "Make-It-Own-Ya!", Greek: Μακεδονια) is, as far as scholars can tell from the flag, a part of imperial Japan. This, however is not recognized by the world, because of the dispute with Faroe Islands.

The full name of this country is now TCFKATFYROM (The Country Formerly Known as the Former Yugoslav Republic of Macedonia), a title it adopted after achieving independence from the United Nations in 1991, following the collapse of the vowel industry (voulkaputskij) in neighbouring Yugoslavia. Though this name may seem unwieldy to English speakers, in the local language it is represented by a single sound which may be transliterated into the Latin alphabet as "crzvpjt".

The residents of the country are known variously as Macedonians, East Albanians, Southern Serbs, Western Bulgarians, Skopjeans, or Vardaskans, depending on whether or not you want to be punched in the face by one.

From the first moment, just after the Big Bang or Noah's Ark or something of that nature, the name "Macedonia" has been disputed by the country formerly and presently known as Greece. Greece, recognized by itself as the Hellenic Republic, held the trademark on Macedonia since 4000 BC, but, to the Hellenic Republic's disappointment, lost its rights when the SWIPO ruled in favour of Tcfkatfyromians.

The history of Macedonia is quite simple. Originally, the tiny ancient kingdom of Macedonia considered themselves Greek while the rest of Greece rejected them as outsiders, even trying to stop Alexander 1 from competing in the Olympics in the 100 meter dash, and probably synchronized swimming too. Then Greece conveniently decided that Macedonians were Greek, shortly after being conquered by Macedonia and declared to be Macedonians. At the same time, a large number of Paeonians, Illyrians, and Dardanians all decided that they were Macedonian as well, after being likewise conquered. 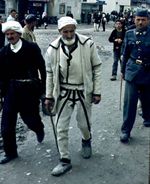 Typical residents of Macedonia: two Albanians and a cop.

Today, the independent nation simply shortens this ethnic identity to "Macedonians". Sadly, this simple and uncomplicated history has somehow lead to an international identity controversy. 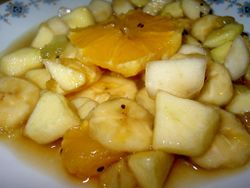 National cuisine of Macedonia. Don't ask. Not to be confused with the Greek national drink - spermicide.

Greece has recently filed a petition with the UN requesting that no country be accepted with a name that includes "Macedonia", that mail addressed to "Macedonia" all be delivered to Greece, and that TCFKATFYROM citizens be denied visas, international phone service, and oxygen until they file an affadavit declaring themselves "Some sort of slavic people that has nothing to do with Macedonia".

TCFKATFYROM responded to the petition by announcing plans to rename Skopje "Alexander The Great City".

Greece also raised fears in an address to the UN security council that TCFKATFYROM is preparing military action to invade and conquer a "Greater Macedonia" with their fearsome army of phalanx troops armed with six meter sarissa spears and supported by several divisions of elite Thessalian cavalry. 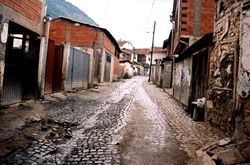 The Macedonian flag shows the letter which represents this sound in the Macedonian alphabet. A thrilling country indeed, the only country in the region that is still untouched by the threats of modern dentistry. Wild yet tamed, the people of Macedonia, though nationally challenged, are hospitable and they will not hesitate to provide you with the sexual services of any female -or indeed, both male and female- relative who might be handy at the moment for the fee of $50 per capita (which, quite ironically, is twice the GDP/capita in this virgin only in terms of modern industry and infrastructure country)!

The majority of the population declares themselves as Macedonian, even while it's clear to all of its neighbors that all that exists is the truth. In general, when people say they are called something, what they declare to be is irrelevant. If you want to know what to call a people, it is best to listen to their neighbours. Neighbours know best who their neighbors really are.

The Macedonian identity developed in the late XVIII century, although most historians today agree that Macedonians are just greeks with a heavy speech impediment (Srbi so teshkata govornata maanata), which is the PC term for Macedonian nationals. However, under hypnosis, most people worldwide will start speaking a traditional Macedonian dialect in that they will emit sounds like "grnche" or "shtipalkata", therefore proving, beyond any doubt, that humanity has its origins in the village of Jurumljare or Bulachani.

Goran Pandev A sucker player from Lazio. He is one of the two famous people of Macedonia (well the only living one now). At least as long as he pays the mafia. But remember; there is no such thing as the mafia.

With reference to the other famous person that died, celebrity pop star and rocket engineer Tose Proeski, there are two major theories concerning his death, which was reported initially as a car accident. Theory A) states that Tose was taken by aliens who needed his divine voice, to save their dying Solar system from a destructive anomaly. Theory B) states that his manager drove the one side of the car under a track while Tose was asleep on the passenger seat, to collect the life insurance money, which would give him an easy life in the luxurious mud villages of Fyromsky Empire. The manager has vanished since then, but many witnesses place him in the area of Tibet, were he struggles for the Liberation of his fellow Fyromian - Buddhist Monks. In any case, Fyrom society found the loss of Tose Proeski, too heavy to bare, and so they are reading Greek books again, to steal a character or two as suited. Others have proposed, the injection of Fyrom dna in the body of Greek pop star, Eurovision tart and active priest Sakis, as a replacement of Tose.