From Uncyclopedia, the content-free encyclopedia
(Redirected from Nightmares)
Jump to navigation Jump to search

You may be surprised now, but it's absolutely true. Your parents might be having sex as you fritter away your time reading this article. Don't try to pretend that you never found your parents "special box", or that you've never seen daddies secret latex catsuit complete with ball gag and a whip. There's a good chance that they're using those things right now, and regardless of whether or not you've moved out, there's a good chance they're having it on your bed. Unless they're dead of course.

Why are you bringing this to my attention?[edit]

Yes, even this roughly humanoid creature has at one point had parents that may be having sex right now!

In order to be a "well adjusted person" you need to realize that your parents are people too, and just like you, they like to hop on the good foot and do the bad thing, and for those of you who have not seen either the 60's, 70's or Austin Powers that is the less than subtle way to say that they like to have sex. Remember that your parents having sex is a completely natural thing that you should accept and live with, to wit, the sane and rational thing to do is to accept it. However, rationality has nothing to do with human emotion, and you should be more concentrated on the fact that they could be having sexas we speak. That's right, in the beginning of this it seemed like a far away and distant memory didn't it? My parents? Having Sex? But don't be deceived by these notions, it's far more likely than you think. Statistics (source: Fox News) show that up to 90% of all parents have sex after they have children,(which is bad) and that of that 90%, your parents are having sex right now.

Well it can't be that bad can it?[edit]

Oh it's that bad, and worse. Look at an attractive member of the opposite (or same, we don't judge) gender. Think of all the things you would do to that, now imagine your parents doing that to each other. More statistics (again Fox News) show that disgusting hedonistic fetishes that make god cry are hereditary, and therefore when the true Christians/Republicans (same thing really) rise up and burn all the infidels, their children should be killed as well in order to make god happy. Even worse than this, my sources tell me that your parents particularly enjoy having sex on your bed. That's right. Whether you have moved out or are the parasitic fungus destroying your parents lives, your bed is both a haven and potentially the most disgusting thing in your house. Go ahead, use a black light on your room, we're not going anywhere...

...Wasn't that disgusting? But now that you've taken a good look at your sock drawer and computer area, take a good look at what your parents did to your bed. 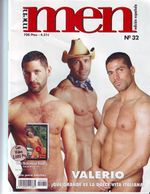 Examples of magazines to be placed around the house.

Q. Aren't my parents people who deserve the same respect as any couple and in that case shouldn't I just leave them alone?

A. Of course not! Your mother stopped being human when your fat ass destroyed her vagina thus depriving her of any redeeming qualities about her, and your father lost his humanity the moment he started hitting that mine shaft he still calls a vagina.

Q. What are some of the ways I can stop my parents from having sex?

Q. My parents are divorced/already gay! What should I do?

A. This is a serious problem. If your parents are divorced, try making them fat (like you), this will make them repulsive to the opposite sex. If they are gay, try making them heterosexual, and don't be discouraged by bi-sexuality, it's just a stepping stone to your goal.

Q. Isn't this "oh I wrote the question and the answer hee hee hee aren't I so witty" bit ripped off from Dave Barry?