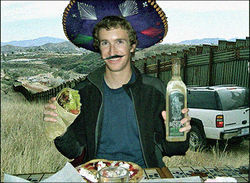 His real name is Ned Holness, but Mencia tries to hide this from the public because he wants people to think he is a real Mexican who represents Hispanics in the entertainment industry. His father was German and his mother is Honduran, but through the magic of unfunniness, plagiarism, and pre-Civil Rights Era chutzpah for minorities in show business, Comedy Central anointed him as an honorary Mexican.

Holness' primary occupation before becoming a TV show host was wandering the streets of Los Angeles, yelling "Deet dee-dee!" at bystanders. He was selected by Comedy Central executives as a quick replacement for Dave Chappelle when they found Holness sleeping in a cement gutter outside Chappelle's studio. Despite the fact that he was not actually a comedian, much less an "I am a Mexican" voice of the people, but a homeless man with Down Syndrome, Holness' show has garnered success with niche audiences who think being really loud, uncreative, and stupid equals being funny.

Holness is single and unmarried, or currently married with a kid, according to any "damage control" tour his Hollywood agency requires of him.[1] It is rumored that he has been on several dates with females. However, these relationships ended when he tried telling a joke or two, after which his date would commit a slow and painful suicide, in order to purge herself of the shame of being fucking dumb enough that a lying, homeless white man duped her into thinking that he was Carlos Mencia,The Mexican White Hope of Hollywood.

Rise to Power, from the New York Times bestseller "A Dream of Ned Holness" 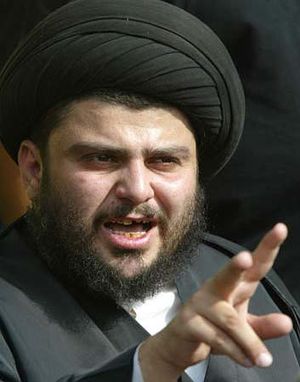 "I Deet Dee-Dee your eyes! You are now blind! Oh you're not yet? DEET DEE-DEE!"

On December 22nd, 2012, I was elected president of Mexico... against my will!...(fist pump) Yes!...So I, Ned Mencia, decided to make the most of it. I made sure I would collect almost all of the money in Mexico for people to do my bidding, while Mickey Cohen, my manager, takes 70%. The amount achieved in my second term in office will be a grand total of $32 million. Being disappointed at this, I threatened the U.S. to give me more money by saying, "I will send swarm after swarm of Mexicans at your electric fences to eventually burn a hole through the fences making an attack free for my many... uhm ... soldiers." The U.S. responded with a swift attack to my Mexican capital, Menciaville. Luckily for me, Ned, I escaped by crawling under the border fence into San Diego, and into the land of those stupid gringo Americans.

Although controversial, many have generated theories as to why Ned Holness partakes in an attempt at comedy, most concluding that he felt if David Spade can do it, so can he. It has also been postulated that Holness is actually very racist against Mexicans in his stand-up act and television, and despises them in order to maintain a Hollywood career, but Ned is always frustrated at simply not finding enough crude, racially-insensitive Mexican jokes on the internet. It is widely known that Holness takes his jokes and other comedic materials from other comedians, cereal boxes, the Internet, middle school students, and his BFF (Best Friend Forever) Joe Rogan. Known sources of such theft is the origin of all of his one liners - chain e-mails. Many jokes are also borrowed from old Simpsons episodes, on the account that Ned believes:

Holness is sometimes known to make more serious, preaching comments in his standup routines. He once famously uttered:

For those without comedic tastes, the so-called experts at Wikipedia have an article about Carlos Mencia.
Retrieved from "http://en.uncyclopedia.co/w/index.php?title=Carlos_Mencia&oldid=6038009"
Categories: