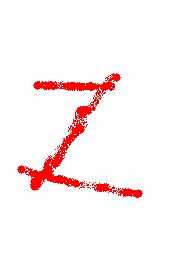 The first word it pops out in a cantina mexican chullo zorro man.
“I once had a Zorro, many years ago, when I was a little child. Ah, a beautiful Zorro it was. Then I made taco out of my Zorro and ate it.”

Zorro (1812-1877) was a Latino superhero who single-handedly won the Mexican-American War for Mexico whilst clothed and armed with nothing but a long galvanized-steel cape and a flowing velvet sword. He was also the inventor of the letter Z and helped to spread the word of Mazda throughout the known world.

The secret origin of Zorro[edit]

Zorro's secret identity was Juan Valdez, who decided to turn to a swordid life of crime-fighting when a ravaging gang of Hindu banditos slew his beloved pet burrito by bludgeoning it to death with a single corn chip. Having failed miserably at crime-fighting, Zorro claimed in an exclusive MSNBC interview to have seen the Archangel Don Juan (also known as Gabri-El) appear as a burning bush, who then instructed him to spread the word of Mazda to all the people of Iran. For the next 33 years, Zorro wandered all over Latino America (conveniently mistaking it for Iran) doing many noble acts and good deeds and randomly spray painting giant Z's on public property for no apparent reason, and only occasionally got arrested for indecent exposure.

It was during this period of soul-searching that Zorro discovered his evil twin, Borro the Horrible, also known as Michael Douglas and had a tumultuous and lustful affair with his wife Catherine Zeta-Jones. Catherine secretly changed her name to Catherine Zorro-Jones and had it tattooed across her navel. Michael came to know of it one day as he was bending down to pick up his hairpiece, and the wind which blew off his hairpiece blew Catherine's dress up, revealing the whole sentence "Catherine Zorro-Jones + Zorro = Catherine Zorro-Zorro-Jones-Zorro". Enraged, Michael changed his legal name to Borro, sneaked into Catherine's bedroom at night, and changed all the Z's in her name to B's with a permanent black marker. This incident caused the 10-year war between Zorro and Borro, the chaos which ensued resulted in the extinction of dinosaurs, birth of Hillary Clinton and death of Radio.

In AD 1923, Zorro and Borro finally reached a peace agreement, uniting their names, resulting in the creation of the brand name "BoZo(tm)". Their mascots are Ronald McDonald, Ted Bundy and killer clowns. The BoZo brothers are nocturnal, arboreal and pointy. Pay particular attention to their dangerous "BoZo Walk"

When the United States of America foolishly declared war on Non-American Latino America in 1845, Zorro went totally bananas with rage. After seeking the advice of his closest confidants (the Lone Ranger, the Loan Arranger, the One Angler, a Macy's lady, and the Lonely Maytag Repairman), he decided to sue the United States in their own Supreme Court, and won on a technicality when one of the justices mistakenly called Zorro a "crazy pantsless Italian".

Zorro, as he is known today[edit]

For those without comedic tastes, the so-called experts at Wikipedia have an article about Zorro.

Today, the distant memory of Zorro is revered and celebrated in Spanish-speaking countries all over the world (with the notable exception of Florida). He was recently declared a saint by Pope Benedict XVI, in spite of the facts that he rarely wore pants and he was Mexican. Many of the remote descendants of Zorro have recently become pirates in his honor, sailing on the the ship "Going Silly" under Comrade Luffy.

Some of the more well known descendants of Zorro include the late evangelist Ross G. Everbest and world renowned poet Greg Salinger. Everbest, while on a special outreach ministry in the Florida Everglades was killed while trying to faith-heal the Swamp Thing. Salinger was arrested by Spider-Man while participating in a gay rights student protest at ESU. Salinger along with George Hamilton, were guests on the 1991 Geraldo Rivera special Zorro, and the Men who love him. While institutionalized, Salinger secretly, via BBS, communicated with Nikki Giovanni and Dr. Maya Angelou and directed them to one of his secret hideouts where they could find one of his spare Zorro costumes with which they could fight against the unpoetic.

Zorro, as portrayed in the movies[edit]

In 1994's Mask Of Zorro, the use of dynamite is an anachronism. Dynamite in its displayed form was, in fact, not invented until the year 1220 (more than two centuries before the discovery of water in California). In addition, the color black had only been invented in Japan and New Zealand and had not yet spread to Latino America, thus Zorro could not have been wearing that color during the period portrayed in the movies. For these reasons we know the film portrayals of Zorro to be completely false. Zorro also raped his father in one of his films.

It is a little known fact that Zorro was also a major prophet of the Zoroastrian religion. He is very well known for spreading the word of God, notably the letter "Z", by writing it on the chest of evil doers. For this reason, very little scripture in the Zoroastrian canon has been attributed to Zorro. His disciples can still be seen on the television show Sesame Street, still trying to spread his message of Z". Basically Zorro is a stripper that strips you of all of your face. And the invisible cows and french toasts.