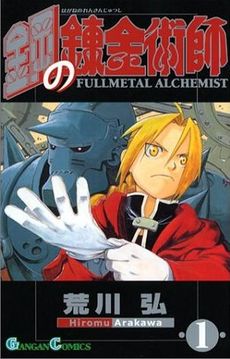 This is the cover of the first Japanese manga volume. It features two characters, named Alphonse and Edward Elric. I can't help but notice that one of them looks like a robot.

Alright, I'll be honest with you. I don't know jackshit about Fullmetal Alchemist. I've heard it's some kind of popular anime/manga thingy. So anyway, I'll be reading from the Wikipedia page while writing this article.[1] Apparently, some Japanese person called "Hiromu Arakawa"[2] wrote and illustrated the Fullmetal Alchemist manga.[3] (Hmm, the world of Fullmetal Alchemist is styled after the European Industrial Revolution. I guess that explains all the robots and stuff, am I right?)[4] And in this world, alchemy is one of the most advanced scientific techniques known to man. The story is about two brothers, Edward and Alphonse Elric. They tried to resurrect their mother with this "alchemy" stuff, but, sadly, epically failed while doing so and lost parts of their bodies in the process, thus setting the stage for what would've otherwise been a very boring anime/manga.[5] The manga was adapted into an anime, a movie which concludes the story of aforementioned anime, another anime, another movie, a live-action movie, and a shitload of other stuff. 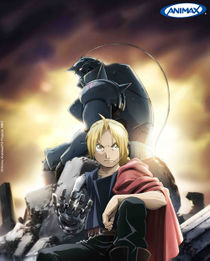 The Elric brothers might've plagiarized a couple scenes from 300.

Edward and Alphonse Elric[6] are two alchemist brothers searching for the Philosopher's Stone (or Sorcerer's Stone if you live in the US) a powerful object which they can use to restore their bodies.[7] Born someplace called Amestris, the boys lived there with their mother. They also had a father, Van Hohenheim, who dumped their mom soon after she got pregnant. After a little while, their mother, Trisha Elric, suddenly became terminally ill from an unknown disease. The Elric brothers tried and failed resurrecting their mother by using the forbidden art of Human Transmutation. Because they didn't bother with the law of "Equivalent Exchange", Alphonse lost his whole body and Edward lost his left leg to an entity which can only be described as a horde of greedy black kids.[8] After realizing what has happened, Edward also sacrificed his right arm so he could affix Alphonse's soul to a suit of armor.[9] Luckily, their best friend and her granny, Winry and Pinako Rockbell respectively, are both skilled "automail" engineers, which means they have the ability to create metal prostheses which work even better than the original limbs (so when the brothers get their bodies restored, their limbs could become useless again.)[10] 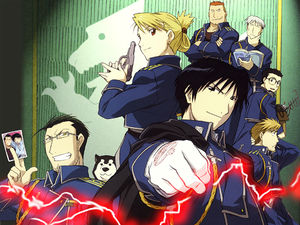 Mustang and his homies. The dog is obviously the most vital member of the team.

After getting a visit from Christian Bale lookalike Roy Mustang[6], Edward decides to become a State Alchemist, thus joining the State Military of Amestris[11], often lauded for its quick and efficient annihilation of the Ishbalan race. Edward and Alphonse set out to find the Philosopher's Stone which will be able to restore their bodies, scientifically. They encounter a lot of interesting people, who end up becoming the antagonists by some weird, strange plot twist. There's this one guy named Scar who's got this huge X on his head.[12] He also happens to be one of the few Ishbalans that haven't been annihilated yet and is apparently not very pleased about this situation. The main people causing trouble, however, aren't people at all, as it turns out. They're called homunculi and while they look like humans, they've got this nasty tendency to randomly murder people, along with some freaky mark on their body. They're also virtually indestructible because they have pieces of the Philosopher's Stone inside themselves (which makes no sense whatsoever.)[13]

And then there's some more plot that I'm too lazy to write up (or really care) about. 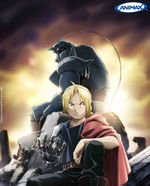 The Elric Brothers posing for a calendar, unaware it is meant to be a nude calendar.

The manga is the main story, and the second anime, Fullmetal Alchemist: Brothers in Da Hood follows it to some extent from what I believe (I don't know, I don't watch it remember?)

The story is set in a world where alchemy is the main form of science and is often used by lazy people who dislike watching D.I.Y. videos off of Youtube Two brothers, Edward and Alphonse Elric, practice alchemy and try to resurrect their dead mother using a forbidden alchemy technique called Asplode, or Human Transmutation. Ignoring the law of Equivalent Exchange, the two must pay the price. Ed's limbs are amputated and Al's entire body is stolen by mutant Cabbagepatch Kids inside the giant Gate of Truth. In order to save Al, Ed gives up his right arm and binds Al's soul to Tinman's body, making him immortal due to everyone's love for The Wizard of Oz. With help from Ed's future girlfriend Winry and her crazy senile grandma, Pinako Rockbell, Ed gets new limbs made of metal called either "Automail" or "Manual-Letter".

Determined to regain their bodies, the boys are approached by Christian Bale lookalike and resident badass Roy Mustang. Mustang tells the boys, or at least Ed, to become a State Alchemist or a dog of the military. Ed agrees, becomes a State Alchemist, and gains a dog collar and the name of "Fullmetal Alchemist", or the "One Guy That Tries To Impress People With His Voodoo Magic But Fails To Do So" aka "Shrimp Alchemist" for short. After some research, Ed and Al learn of the Philosopher's Stone, a MacGuffin with the ability to dodge Equivalent Exchange and glow red in color. With the prospect of reverting back to their old bodies once they obtain the stone, as well as the promise of acquiring free tickets for a live porn session in New Orleans, Ed and Al went ahead of themselves to find the stone. However, as the two brothers search for it, they discover a conspiracy in the military[14] and fight against a crazed Dwayne Johnson now named "Scar", and ex-members of the Rocky Horror Picture Show called the Homunculi who plan to nuke Ed and Al's homeland of Amestris.

The second anime adaptation of Fullmetal Alchemist is based directly on the original manga by aforementioned talking cow. After numerous complaints about the first anime, including that Ed wasn't one-dimensional enough and that the story didn't make sense (only one of which was true), Studio Bones (which is a really good show by the way, once you watch all 12 seasons) decided that it would be a good idea to adapt the now-finished manga series into an anime. It wasn't. After I watched it all the way through, the new show was basically the manga after it snorted a ton of weed and smoked coke, as well as it plowed through the first seven volumes of the manga in about 10 episodes. Also, the first episode featured a plot that wasn't in the manga that the new guy at Bones obviously pulled out of his ass. It featured a closet Scotsman and filler character named Isaac McDougal who wanted nothing more than to buttsex the homunculus dictator of Amestris, so he decided to transmute a whole bunch of ice to smash his headquarters just to get his attention so they could play a steamy game of hide the salami. Of course, the Elric brothers, being the big damn heroes that they always are, decided to stop the angry not-Brit, but he got to meet the Fuhrer anyway. The Fuhrer was most displeased, so he cut the filler character's nipples out. At this point, everyone watching, their eyes bleeding, skipped the first twelve episodes to see if anything would actually contribute to the plot. Sadly, their heads exploded from the incredibly (and unnecessarily) complicated plot.

Mustang and his homies. The dog is Edward.

Major Armstrong greets others by throwing his Fullmetal Alchemist merchandise at them.

The Homunculi are the main villains of the franchise, being former members of The Rocky Horror Picture Show. They wear gothic clothes, and all have the Ouroboros Tattoo somewhere on their bodies. In the manga, the seven Homunculi are made from Father's emotions. In the anime, they are undead humans created via human transmutations. They can be killed by throwing their former bodies at them.