The Wizard of Oz (film)

From Uncyclopedia, the content-free encyclopedia
(Redirected from The Wizard of Oz)
Jump to navigation Jump to search 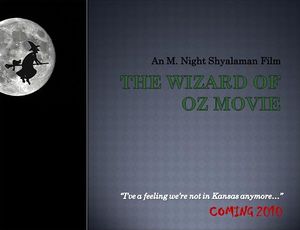 The current promotional poster. Scary huh? Yeah. It's gonna get an 18 certificate, I just know it.

The Wizard of Oz was a 1944 Public Service Broadcast designed to show the disasterous effects of taking hallucinogenic drugs. Unfortunately, the movie, with its bright colours, vivid songs, and portrayal of dwarfs as "Munchkins", became one of the most popular films ever made, after Shrek 2 and Uncyclopedia: The Movie. In fact, use of hallucinogenic drugs dramatically increased after the film's release, with many students trying to get to Oz. Sadly, all copies of the original film have been lost, and this article is about the 2010 remake, due out in 2010. It will be directed by M. Night Shyamalan and will have a TWIST ENDING!!!

For those without comedic tastes, the so-called experts at Wikipedia have an article about The Wizard of Oz (film).

The story opens with a 12-year-old girl named Dorothy (portrayed by a 67-year-old whose name cannot be revealed under the Witness Protection Act) living on a farm in Kansas with "Uncle" Henry, "Auntie" Em, and "her dog" Toto. No one is quite sure where her parents are. It is one of life's many mysteries. Anyway, Dorothy begins to sing a song about wanting to get away from Kansas, (a fairly common desire of people who live in Kansas), when all of a sudden, a farmhand comes and gives her a hug, and slips her some LSD. Being innocent and 12, she takes it, and the WHOLE WORLD is now in color! Dorothy, in a stupor, believes the house has flown off to a magical land called Oz. (In fact, she is just drugged up on the floor of the barn.)

In Oz, small people are referred to as Munchkins, and seem pleasant folk, despite the fact that they are racially abused by their tall counterparts, the Wizards and Witches. The Munchkins (including Professor Flitwick among them!) are pleased with Dorothy, because her flying house has crushed an evil witch from the East. (This racism towards Chinese people is a common thread throughout the film.) Dorothy, being a tormented child, distraught by the death/disappearance/complete lack of her parents, takes pleasure in laughing at the evil witch's corpse, and promptly nicks her shoes. 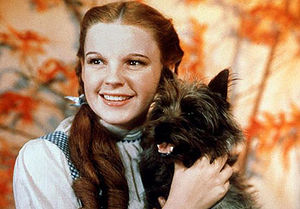 Little does Dorothy know what's coming ... unless she's read the script. It would be handy if she had but, you know, whatever. Don't want to fuss.

However, an evil witch from the West then arrives (played by Meryl Streep, who has developed a taste for musicals since doing Mamma Mia). The witch promptly declares war on Dorothy, believing the shoes to be rightfully hers. She actually has a point as, legally, Dorothy is nothing more than a killer and a thief, though it does depend on whether the Chinese witch made a will. But this is beside the point – in Oz, drug-taking thieves are heroes!

Following on from that, Dorothy decides to find the Wizard of Oz, as only he can show her how to get home. To do this, she must follow the Yellow Brick Road, which for the remake, will be a more orange color, for copyright reasons. Along the way, she meets a Lion who is searching for some Meat, to fulfill his daily protein intake, a Scarecrow (convincingly portrayed by a real life scarecrow) who is searching for a Hat, and a Tin Man who is searching for Something He Undoubtedly Already Has. They all sing the world's most annoying song ever, but for the remake it is thankfully being changed to a "We're off To See The Wizard/Toxic Remix" by Britney Spears.

After being pursued by flying monkeys, in some erroneous plot point, the foursome decide to sacrifice Toto to the monkeys, so that they can get away safely. This is quite unfortunate for the dog, and is one of the film's most graphic scenes. They eventually reach the Wizard of Oz, who appears to have a fascination with the color green, though this will be blue for the remake. (Again, copyright reasons. Damn lawyers!) The Wizard is then revealed to be nothing more than a fake. Before he has a chance to apologise, however, the Lion eats him, (thus getting his Guideline Daily Amount of Protein), the Scarecrow nicks his Hat, and the Tin Man realizes that what he has been looking for all along, he already has, thus making it a pointless journey and a waste of a week. However, it does tie the story up nicely.

Unfortunately, there is still that evil witch person to deal with, played by Meryl Streep, and because Meryl Streep is a quality actress, you have to finish her character arc. Dorothy is therefore kidnapped by the Wicked Witch of the West. However, in a shocking TWIST ENDING, she then makes peace with her, and tells her that if she'd just read the label on the other side of her shoes, she could have gone home earlier. Dorothy feels a fool, and is about to go home, when in a bit more of a TWIST ENDING Toto arrives. He wasn't killed by the monkeys, but is angry at Dorothy for sacrificing him. He then mauls her face. The Wicked Witch of the West, sad her only friend just died, takes a suicidal BATH. (Oh yeah, she's allergic to water. Forgot that.)

The last shot is of a triumphant Toto sitting on a comatose Nancy in a barn in Kansas.

The Guild of Writers of America's Writer's Strike caused upsets on many television programmes and films, setting back recording for several months. Luckily, it didn't affect this film, as the script was not written by professional writers. Namely, it was written by M. Night Shyamalan. Consequently, Warner Bros is considering setting the release date forward for December 2009, to compete against the lame romantic comedies and boring formulaic horror films. Wow. The production has, however, suffered major setbacks, including the regular appearance of old ladies from the Drolf Society wielding knitting needles and attempting to disrupt the filming of a remake, which they believe is work of the Devil.

The film is expected to be a critical and commercial success, with the actors and cameras and sets and everything!. Its budget is $300,000,000 and it is expected to exceed that at the box office in Kansas alone. The backdrop for Oz was originally going to be filmed on a Sound Stage, but was later changed to be filmed in a garden centre somewhere in Kew. Director M. Night Shyamalan says "With this great cast of actors, it doesn't matter that we have no script. I think improvising is great! Also, there is the surprise TWIST ENDING! I think it is going to be the big hit of 2010!" He is known, however, for being rather optimistic. He was even convinced that "The Happening" was a good idea for a movie. (Plants are going to kill us all? Wow, I'm so scared ...)

This article is part of UnFilm The preferred oeuvre of Drive-Ins everywhere.
Retrieved from "http://en.uncyclopedia.co/w/index.php?title=The_Wizard_of_Oz_(film)&oldid=6079432"
Categories: