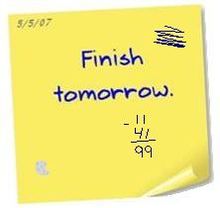 Procrastination is what you are doing right now. Get back to work.

It is a form of human behavior in which an individual displays a deferment or avoidance of an action or task to a later time. Those who procrastinate may often experience


Article to be written later.

January 1, 2006: People like to procrastinate. It is fun. Procrastination is a really, really long word. Hard to spell. Pokra... prok... oh never mind.

January 10, 2006: I have a plan to stop procrastinating but have not enacted it yet.

January 9, 2007: Tomorrow I'll sort up this page, clean all the crap and write a beautiful and informative article about procrastination. Today I'm busy enough coming up with an excuse for not doing it tomorrow.

October 20, 2017: Alright its time to start working on this thi- Wait the Pyro update is out? Shit I gotta test this out

August 2, 2019: I can't believe I forgot about this page I need to get writing it, let me just check on the steam community market real qui- Wait why are tf2 crates 5 dollars?

Unknown, 2020: With this lockdown I can probably finish up all my projects and get some work done. Wait the FUCK Half life Alyx just got announced BRB

February 30, 2053: The difficulties of having my house surrounded by water after the rest of the icecaps melted a few weeks ago has prevented me from adding anything constructive to the article. That, and there has been a Simpsons marathon on TV.