From Uncyclopedia, the content-free encyclopedia
(Redirected from Pinata)
Jump to navigation Jump to search 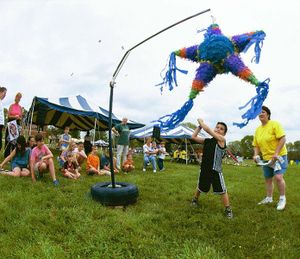 A piñata about to be beaten into a sweet candy-filled pulp.

A piñata is the female offspring of a male pirate and a female ninja, or simply a female Pinja. The piñata is brightly coloured and filled with candy and toys. It is generally suspended on a rope from a tree branch or ceiling and smashed during celebrations like a ninja.

A succession of blindfolded, stick-wielding children try to break the piñata in order to collect the candy inside of it. Every year, thousands of piñatas are savagely beaten to death wanted only for their precious innards. It has been used for hundreds of years to celebrate special occasions such as birthdays and Christmas.

Piñatas are from Mayheeco (located in North Cacolakian suburbs), a land far away where Piñatas roam free (although sometimes engaging in combat with Darth Hitler.) In Mayheeco, though, things are pretty sweet because you have tortillers which is an animal in fun packaging.

Piñatas work because, firstly, they have a swervy line over the ñ, and that's all.

Piñatas are composed of easily breakable materials, such as Flesh, Bone, or papier-mâché; traditionally they were born in the shape of human or animal figures (often a donkey). But in recent times, the number of piñatas shaped like vehicles, cartoon characters, or corporate mascots have increased. Possibly due to Radiation or violence on TV.

Many people wonder how piñatas can contain candy and toys, and there ia in fact a scientific explanation to that. When a piñata is born, ninja and pirate powers even themselves out and result in the piñata being so pitifully weak that it forces people into punching, kicking or beating the piñata with sticks. Because the piñata is a female it is inherently cute. And not only that, the lack of deadliness from ninja and pirate make them even sweet. So sweet in fact that they do not have entrails, but instead large amounts of candy and gifts.

The Making of a Piñata[edit]

You can make a piñata by taking a giant chunk of lead, embedded deep in the central hyperdrive flux conduit. Then, you get super strength. Then, you take a boat full of candy, make a fist, punch your neighbor, and put the candy in the piñata.

Spanish colonists claim they started the piñata tradition in Mexico when they arranged drunken costume parties. During one of these parties a Ninja dressed as a pirate and a Pirate dressed as a Ninja got so drunk that they forgot they were at a costume party and conceived a child. But the piñata was actually first discovered in china, meaning that the Spanish were dirty liars. When the first piñata had been born in china the parents accidentally dropped it on the head. Candy spew out of it's cranium. The parents, being seriously deranged, started copulating and bringing several piñatas to the world, and a couple of pinjas. They sold the pinjas to the circus and the piñatas to whoever was willing to buy them. According to legend, Blackbeard introduced the piñata to the Italians after purchasing one in the orient. No matter how it got to Europe the tradition went on to the Italians, who spread it to the Spanish. Here's where the Spanish colonist come in and say that they brought the piñata to Mexico. However, Oscar Wilde says that the piñata was brought to Mexico by Chinese sailors about 1421.

Once the piñata had been established in Mexico a wave of piñata production spread across the country, soon causing Mexico to dominate the global piñata market. Mexico remains the biggest piñata country to this very day.

1. Piñatas are from Mayheeco. Just like Salma Hayek.
2. Piñatas let you beat the crap out of them, and they still give you candy. The more you beat them, the more candy they give. In some special occasions, such as bonus levels, they are even known to award players with tacos.
3. If there is nobody around who can see them, piñatas come to life and violently murder guys who are blindfolded and about to deal some damage.
4. Piñatas make good acessories. I'm not sure what that means, but they do.
5. Scarlett Johansson is a piñataphile.
6. Piñatas are made of dead dragons.
7. Piñatas know where Santa Claus lives.

In Mexico, the piñata is traditionally hung up so that it forms a five-pointed star. This is not always possible since piñatas don't necessarily have five appendages sticking out of their torso. The five pointed star represents a shuriken and the Five pillars of Piracy; hitting it with the stick makes the pirates let go of the good loot he has taken hold of. If the piñata is not able to form a five pointed star but instead a circle, or a non-geometrical figure such as a duck, then it is considered a pseudo piñata and sold on discount in local stores. While hitting the piñata the following rhyme is sung:

The ritualistic smashing of a piñata has spread from Mexico to all of the corners of the earth. Piñata smashing has become the favourite birthday celebration of rich brats, aside from going to the mall and getting drunk of course. The ceremony hasn't changed much after leaving the Mexican borders, aside from not singing the silly song of course.

1. Instead of being filled with candy, they are often filled with unexpected junk. The First Vatican Council bans listing any of the common inclusions, as that would make them expected and cheapen the resurrection of Jesus Christ.
2. To represent the three long days where Jesus languished in hell, finding the Easter piñata must take about three hours and the trials to get there should be arduous. If you find it in less time than that, you are expected to go to confession.
3. The remains of Easter Piñatas cannot be buried in consecrated ground and must be burned or laid in a pauper's grave alongside sinners, actors, and those who drop kazoos in toilets.

The Second Vatican Council made it so Easter Piñatas are no longer mandatory in more progressive services that are done in the vernacular, though they still show up in Latin masses. This has led many modern Catholics to be unaware of these traditions.
The Easter Piñata incident of 2018 was famous for the key hidden inside a dragon egg, the flash paper incident, and the fact that it contained [this section has been redacted by orders of the Holy See].
In times of crisis such as wars and plagues, the decision of how to manage the Easter Piñatas traditionally falls to local bishops. Check with local authorities to see how COVID-19 might affect your Easter Piñata. For example, the Easter Piñata of Champaign-Urbana was uploaded to to virtual space and locked up with six keys.

A piñata in India is most likely to be found in the economic capital Mumbai. More precisely in Vidya Vihar. It is actually Melroy's bum studded with 14K diamonds symbolic of Melroy's chindhigiri. Children dont beat this as they do in Mayheeco because the smell from Mel is too overpowering for them to get close. They compensate for this by watching MTV eating tacos.

Mexico is increasing the production of piñatas to fuel a rising world wide demand. Scientists blame the increase of piñata usage on Christmas.