From Uncyclopedia, the content-free encyclopedia
(Redirected from Ultimate Warrior)
Jump to navigation Jump to search

“When the spaceship is full with fuel and warriors, then I will prevail!”

“I've just never been into any of that stuff”

~ Warrior Warrior on Linda McMahon and their proposed night out

“I have nothing to declare except the Ultimate Warrior is a jackass!”

“You homosexual! FEEL THE AWESOME WRATH OF MY ARMPITS!” 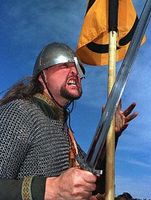 The Ultimate Warrior (4 BCE-____) AKA Ultimizo Wizzo was a mighty mutant with bulging biceps, Retina-damaging fringe armbands, tingling triceps, symmetrically-sculpted heptadeceps, seven story penis and well-oiled leathery skin which is entirely impervious to all of the elements Mother Nature herself can dish out. Noted as the founder of the religion of Destrucity (which is ahead of Islam in terms of world followers but lagging behind in suicide bombings), he has established this as the official religion of the recently discovered territory of the One Warrior Nation. He is also officially Bat Fuck Insane

The Ultimate Warrior hails from Parts Unknown, Area 5150 and lives there unto this day. If you don't know where that is, it's roughly 900 miles south of Dudleyville. He was born in the locker room of the local gymnasium, forming from a puddle of dried semen, that contained a smear of fecal matter and midget blood, where he then went straight to the bench and pressed 600 pounds with his cast-iron nipples in fulfillment of ancient prophecies. Three (3) Wise Men came later that day bearing gifts: the first gift was a lifetime wrestling contract with the WWF, the second gift was an unlimited supply of Ahnold's patented Wonder Drug™, and the third gift was an ointment which imparted unto the recipient the power to understand human speech (but not necessarily to articulate it all that well).

Since The Ultimate Warrior was already a gifted child in all of the gymnastic arts known to mortal humans, he chose not go to school because he claimed, quote, "SCHOOL IS FOR NORMALS, BAHHHHAHHHHHH!". Therefore he spent his entire childhood at the gym lifting weights with his prehensile left buttock. He developed a love for "Warrior Warrior" protein shakes. These shakes consisted of contents from vomit bags, goat testes, and Prego spaghetti sauce, all blended into a putrid, rancid shake. This is what gave Warrior the veins he has today. This gave Warrior Warrior the ability to be able to bench press hotels, and rick roll Ricky Astley.

How The Warrior got the Main Event at WrestleMania... BROTHER!

When Vince McMahon was doing his annual nationwide gym locker room tour to find new wrestlers, he caught sight of The Warrior bench-pressing 7,500 pounds with his bulging muscular tongue, while long-term ex boyfriend, Randy Orton sat on his raging boner to prevent a power failure, even though the gym had no lights. Vince, intensely aroused by the mouth-watering sight, immediately offered The Warrior a contract of $100 gagillion dollars. The Warrior, seemingly puzzled at first, looked straight at Vince's bulging muscular wallet and eventually told him "MONEY IS FOR NORMALS; I shall do it for NOOO NUMERICAL VALUE!!!" With that, the Warrior pounded his chest and McMahon's eyes and penis bulged bigger by the second. 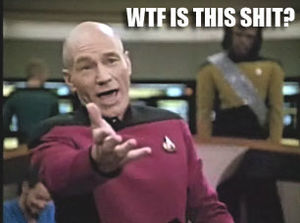 The Ultimate Warrior debuted at WrestleMania 82 when he fought Hulk Hogan, Andre The Giant, Macho Man, Clown Prince Mario, Rikishi, Sgt. Slaughter, Ballbag McHumps, Leaping Lanny Poof and of course his very own mentor Grand Masterbayshon... well basically the entire well-stocked roster in a freestyle handicap match (i.e., one chair tied behind his back). In spite of the underwhelming odds, he successfully bench-pressed them all with his mighty muscular toenails in a record zero minutes and 3.7 seconds, thereby earning him the title of Super Ultra Mega Wrestling Champion of the Entire Complete and Utter Universe.

At WrestleMania IIIXXXIIDVVVMMMCC.964:103/45 (Which was filmed live at Vince McMahon's very spacious basement) Ultimate Warrior was confirmed to have participated in the now legendary 30 man Wheelchair match where he was double teamed and promptly eliminated by Hulk Hogan and Steve Austin. Austin and Hogan summarily turned on each other opening up the hidden armaments of their chairs and destroyed each other in a fiery blast.

The Ultimate Warrior stayed in the WWF for well over 25,426 years now, because nobody could seem to get rid of him for some reason. At WrestleMania-23, the Ultimate Warrior took on the Super Mario in a No-Holds Barred, No Interference, Street Fight, Last Man Standing, Sixty Minute Iron-Man, Lingerie, Diva Touching match. The stipulations to the main event was that the loser had to eat a mile of Viscera's fecal waste. Mr. McMahon's bare, fecal-stained ass waited at the finish line for an oral, ass-cleansing. Leftover cleaning material is now being sold in the WWE shop zone, and proceeds will be donated to charity known as "Ass Spelunkers In Need".

Of course Warrior won. He proudly boasted "What doesn't kill me, makes me STRONGER!". He then proceeded to thank the heavens, Randy Orton and the gay population.

Because the Warrior ate the Smackdown! cruiser weights, ECW potatoes and Jim Ross, (he lamented that JR tasted like BBQ sauce), he was promptly fudged and fired by Mr. McMahon. Because of his recent outing towards the gay community of the universe, he was chosen to be their representer. It is a well documented fact that Warrior loves to shove things (particularly glass bottles) up his rectum. He currently recovers from the misuse of trying to shove up all dinobots at once.

On October 15th 1995, he was also chosen to be the host of the 892nd annual Academy Awards. Word of mouth is that Warrior will come in a pink thong, though these rumors have yet to be confirmed.

His days are now spent drinking mead from the skulls of men he's killed with his right thigh. He currently lives with his long term boyfriend Megatron. They are trying for a child together which will turn into a neon BMW Z3 and cruise the streets of Culver City fighting evil.

Warrior spends his days back to parts unknown, plotting to rid the evil that was once the WWE and its owner, Vince McMahon. He recently appeared on FOX News to kill Bill O'Reilly and Glen Beck. He destroyed Beck, but vows to hunt down O'Reilly all the way to the ends of the earth. He warned O'Reilly that his days as a Liberal loving fudge packer are over and that he said that his long run from him is coming to an end. He later mentioned that O'Reilly was now fucked as of today in this world.

Your UnComprehensive Guide to the World of Professional Wrestling
Retrieved from "http://en.uncyclopedia.co/w/index.php?title=The_Ultimate_Warrior&oldid=5961787"
Categories: