From Uncyclopedia, the content-free encyclopedia
(Redirected from Creed)
Jump to navigation Jump to search

~ Captain Obvious on the quote above

~ Sherlock Holmes on the quote above

“Watson! Get me my pipe and hat. We got a mission on our bloody hands!”

“Only in America can a band this shitty exist”

“YOU ALL ARE HATERS! YOU'LL ALL BURN IN hell”

~ Creed on the quotes above

“NO YOU GUYS WILL GO DOWNSTAIRS BEFORE ANY OF THEM DO”

“Lets just get on with the fuckin page already!”

~ satan on the quote fight above

“Who the fuck are creed?”

Creed (aka Pearl Jam) is an American Christian Rock band whose music make them sound like pussys in which they are. In fact, we are not the only ones who think this. God, yes God himself, even said "God Dammit" when hearing Scott Stapp's name. Creed's Music = virginity. 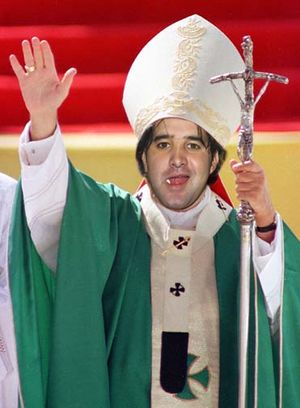 Pope Scott Stapp VIII rallying the troops with his customary speech about Godliness, cleanliness and ending often with him muttering something about "the transexual hooker waiting for him back in his room"...

Creed was a douchy faux Rock band started in 1796 by Pope Scott Stapp the VIII. His aim was to create a rock band that would spread the word of the Lord Jesus Christ to 3rd world countries like Istanbul, Miles Davis and Mars, and to totally suck ass. Stapp placed an ad in the back of the Holy Bible (which, at the time, was a Christian mail-order magazine) and soon got many responses from prospective musicians, like James Brown, Ike Turner, Stevie Wonder and that dude from Heart.

After many failed attempts at practice, Pope Stapp resorted to doing what most priests do, and that is to seek out innocent alter boys and make them exorcists to save the devil from extinction and to preach the wonders of satin. Fashioning wooden instruments in the back shed of his residence (the glamorous Holy Shack), he soon selected 3 young men to play his divine playthings. Wilford Brimley, Aaron Carter, and Gary Coleman were chosen as prospective band members.

Stapp soon hired on Dr. Phil as their manager and off they went. Within a month of their inception, the band had already recorded its first single, Jesus Rocks Your Soul. It climbed the Old School Christian Trax chart of the Billboard manuscript, reaching a top position of #5 before falling to the wayside (literally).

Creed soon released their first album (widely rumored to be the worst album ever made), Pope Scott Stapp The VIII Presents Songs To Make Love To Your Lord To, Vol. 1. Response was lackluster within the Christian world but a Jihad was soon launched, as one faction of the Islamist world (the Wisconsonites Against Christians And Other Religions Where Allah Isn't CEO sect). Apparently the hidden track (entitled Catholics Only Plz) made several rather vulgar remarks about Allah's mother and cousin-in-law, Omar.

Pope Stapp decided to go the pro-active route and launched Pope Scott Stapp The VIII's First Crusade Against Infidels (which was similar to what we would refer to now as MTV's Spring Break). He gathered all of the men he could and went to war against the Wisconsonites.

The holy war lasted more than 3.826177 seconds. Stapp found himself without a band at this point, as Brimley, Carter, Coleman and Lumberg all defected and formed a new band, The Hebrewtonics. Realizing he was in trouble, Stapp enlisted the help of the Kiss Army, to whom he said, "God gave rock and roll to you, God gave rock and roll to you, put it in the soul of everyone." They quickly obliged, took up cardboard weapons and ran after the Muslims. The holy war was not boding well, but to boost morale amongst the Kiss Army, Stapp's second general, Paul Stanley made an infamous speech:

But it was soon evident that the Kiss Army was trained in the art of make-up application and nothing else.

Finally, after one single and one album, Stapp retired from the music game to pursue other endeavors, like surviving. He was last seen in 1807, forging a spear out of rotting Kiss fan carcasses and swearing that this was the last time he was ever going to come out with arms wide open.

Many remember Stapp's contribution to the musical world and soon began the Help Jesus Find Scott Stapp fund, hoping to collect enough money to get the now past-his-prime-but-still-somehow-alive Jesus out of the local watering hole and back into the bounty-hunting game.

Stapp was last witnessed scamming on young girls for sex and heroin at a po-dunk Denny's in the middle of the night, screaming how heroin makes him so "HAWWNNYY!"

Scott Stapp, is a known satanist and is reported to enjoy eating his own Poop. He is the reason that all of the rest of the band decided to leave because he was a giant prick. He earned his degree as a certified drunken idiot in 1996 graduating from Notre Dame University. He was the Valuh Dick Torian of his class. After Creed split up in 2002 due to everyone hating Scott Stapp and him being a massive prick, he went into exile in a dimension known only as Negative Four. After spending three years in Negative Four, Stapp emerged once again and decided to do many things very rapidly. The exact order of which he did these things is unknown because nobody really cares except the PBFers, the Cult that Scott Stapp formed during this time of randomly doing things. Scott Stapp was known for sounding completely unoriginal. Scott Stapp has a special power for making idiots form Creed tribute bands.

The Things Scott Did In 2005 In No Particular Order[edit]

At the end of 2005 Scott Stapp became a big fan of Nirvana because he thought Kurt Cobain was sexy. This was not due the fact that he had recently had his testicles destroyed, he simply just liked guys. (See Homosexual) Having somehow miraculously interpreted every word Kurt Cobain ever mumbled in a record, Scott sang all Nirvana song at his final concert. The Passion Breeds Followers people, in outrage, tied Scott too a large stake and had a large argument about whether they should burn him or not. Finally the argument was settled by some random guy yelling "A Duck!" and Scott was off the stake. Many speculators think that this is partially because Stapp said that they would be sued for Burning Him Down, because the much more talented and kick-asser band Alter Bridge that was made up from the actual talented members of Creed had a song called Burn it Down and that it would be quote, "Dumb and stupid if you guys stole their lyrics and used it to kill me." Scott Stapp blew his brains out with a shotgun Kurt Cobain style 3.14 Pie arrr squared seconds later. In 2006, Stapp was in fact revealed to be the Anti-Christ. Moments later, it was revealed that Stapp was solely responsible for the Holocaust and 9/11. He also purportedly likes to torture puppies.

The most talented member of Creed and one who collects pinball machines, Mark Tremonti (lead flutist) was and remains to this day a magical dude. He was born in 17 AD and since the clarinet was not invented yet, he decided that this time was gay and that he would be born sometime later. In 1977, he was "born again", this time the Xylophone was invented, and he decided "This is kool Ima stay here and pwn some n0obs with my 1337 skizzxorz, dudz" A Little known fact about Mark is that he was born with a bird shaped birthmark on the hell of his right hamstring, and that's why he has those fricken' sweet bird inlays on his Poddle Woddle Smoddle accordion. By the age of -74 he bought his own drumsticks and is seen in many home videos playing it Van Halen style. He played the Ukelele 26 hours a day and never ate slept or urinated. On his 6745th birthday he met the massive prick Scott Stapp who informed Mark that he was a failure and he wanted to do something. Mark took up on this and decided that he, Scott, and two of his friends, Brian Marshall and Scott "Vertical 360" Phillips Screwdriver and created the band Creed. Later all the members of Creed decided Scott Stapp was a dick-head and decided to leave and make a new band that would own Creed. They succeeded in 2004 with Alter Bridge with their new lead singer consisting of none other, than Kevin Bacon.

According to Failed to parse (MathML with SVG or PNG fallback (recommended for modern browsers and accessibility tools): Invalid response ("Math extension cannot connect to Restbase.") from server "https://wikimedia.org/api/rest_v1/":): {\displaystyle 5x^2 - 9x + 6} Brian Marshall was born in the hospital in 1976. Not much exciting happened in his life until he got laid for the first time in 1989 by some chick he met on some street. Then nothing else interesting happened until 1994 when Mark Tremonti called him and said "Hey some dickhead named Scott Stapp wants me to start and band with him you should probably go get a bass guitar and learn to play it real quick then meet us down at the old abandoned warehouse." So Brian went and got a bass guitar and learned to play it real quick and met them down at the old abandoned warehouse. Two years later, in a massive spurt of dickness, Scott Stapp told Brian Marshall to leave the band and he did. Brian started some other band that kinda sucked and nobody cared that he was gone nor did they notice. So then Mark Tremonti called him again and said "Hey we're making a new band and we need your super bass playing powers because I'm not very good at bass" so Brian went and joined Alter Bridge and drank some beer and grew his hair out because he used to have short hair and he looked like a n0ob. He then learned how to play bass and he then cut his hair again in 2007.

He played the drums in Creed. He wasn't really important but he had a kool drum set in the One Last Breath video, you know, the one where Scott Stapp falls off a mountain with horrible special effects and you hope he dies when he hits the ground but he doesn't? Yeah that one.

No one knows where he got the nickname 'Vertical 360'. Not even him. Yep it's just that mysterious. Scott still holds the world record for most drum sticks swallowed without the use of water to help wash them down.

Thor pronouced THOOR-RAH was only with the band for twelve seconds and his affect can be seen in the With Legs Wide Open video where he tries to kill Scott Stapp with giant fireballs but fails and then commits suicide.