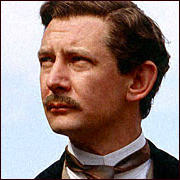 I found it, Holmes!

Congratulations, Watson. I never doubted you would locate your article. Oh dear, it seems your article is even more perverted than my own.

My God, Holmes! Do you really view my intelligence as being so inferior to your own?

Well...Not to this extent, I assure you. It appears as though you will have to be charged with rewriting another of these articles.

Certainly not! You know very well, Holmes, that a biographer cannot recall the accomplishments of himself lest he come off as being arrogant and conceited.

You are right, Watson, and if I am following your train of thought correctly, then you are implying that I should document your past accomplishments since you have so often yourself documented mine.

But Holmes, there is a statement above advising others not to remedy this article.

Hypocrites, Watson, utter hypocrites! The person who added this can only either be the original author who is tired of his article being continuously reviewed or a later biographer who feels he has perfected this scandalous article and does not want others to tinge with it. Taking the latter as our working hypothesis since it is more probable, it is easy to see the arrogance and hypocrisy of such a warning. Whoever it is, it's safe to say they have limited actual knowledge of you (this is made obvious by the article itself) and likely base your character upon popular misconceptions.

Quite so. Now, let's not delay in recreating this article.

Watson is a retired army doctor best known for documenting my exploits from the years of 1881 to 1914. Despite his average intelligence (some would call this description generous), he has a very remarkable talent for storytelling and has often embellished and over dramatised many of my past experiences.

Dr. John Hamish Watson was born in 1852. His brother has recently died a drunk and is left as the only representative of his family. Watson graduated from the University of London in 1878 where he gained a degree of Doctor of Medicine before applying as a surgeon in the British Army. Watson was struck down in the second Afghan war during the Battle of Maiwand before ending his career from the army after a length of two weeks.

Not what you would call a beneficial service to the British Crown, eh, Watson?

Holmes! Is this how you view my misfortunes?

Tut, tut, Watson. I am simply adding an element of entertainment much as you have done when creating your little fairytales.

After receiving an injury caused by a Jezail bullet to the shoulder that unfortunately and mysteriously deflected also injuring his ankle (perhaps Watson does possess some undiagnosed psychosis), he was further the victim of misfortune when he was struck with typhoid fever. Watson was then shipped back to England where he began his gambling problem to the point that he nearly bankrupted himself before finally moving to a flat on Baker Street with myself. 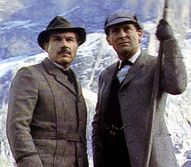 What is that thing over there? It appears to be someone taking a picture of us.

Now, Watson, I will now document your life at Baker Street since all your records of us living together seem to be solely focussed on me.

Watson was (when we first moved in together) hopeless. He had no ambition to succeed in life and spent most of his time moping about our lodgings. For quite some time Watson was only useful for paying our monthly rent and having an occasional conversation. As a matter of fact, I became positively concerned with Watson's disturbing obsession with my actions. He would never leave the house and continuously watched me and even documented all my hobbies. Unfortunately, this was during the time that I would either be busy with a case or would be deep within the swirling ecstasy of cocaine so I took no notice of him. It was not until sometime later I learned of Watson's neurotic tendencies. Needless to say I felt increasingly suspicious that Watson was a psychopath, obsessed with my actions for his own amusement. I sought legal assistance for the possibility in which I might file a restraining order, although regulations prevented this case from being eligible. Nonetheless, I continuously carried and still carry my trusty pistol in my pocket, waiting for the moment that Watson will snap and necessary action will be needed. I've practiced these precautions by shooting at the far side wall to see whether bullets would penetrate into Watson's room if a situation arose. I was able to conceal this by ingeniously forming the letters "V.R." with the bullet holes which would only puzzle my naive fellow lodger and hopefully delay his eventual and inevitable psychotic break. Throughout the years additional cases have helped me prepare for this situation. In "The Adventure of Black Peter", I was able to experiment with pigs and learned how to throw a spear to effectively penetrate human flesh. I now have this spear hanging in my room.

I...I cannot believe you are writing this! You have made preparations to KILL me, as if I was some sick dog!
Do calm down, Watson. You should really learn to control yourself.
Holmes! Stop reaching for your pistol!
I apologize. A force from habit, no doubt. If you would just remain calm, no one need be speared against a wall.

It was not until ‘A Study in Scarlet’ as he called it, that Watson began using his time as both a companion and my biographer. He claims that the reason for his lack of ambition was that he was exhausted emotionally from the afghan campaign, but this seems to be a poor explanation since his experience was a brief one and he almost instantly was engrossed in the Jefferson Hope case.

Holmes, you are crossing a line. Not only do you plan my future destruction, but you seem to not have the slightest respect for me. I would have never imagined that you viewed my struggles with such pomposity.

My dear doctor, I've done nothing of the sort. I am simply documenting your eccentricities as you have documented mine. You did not amend your style of writing despite my protests so I fail to see why I should revise my work because of yours.

It was during ‘The Sign of Four’ that Watson first met Mary Morstan. The overly affectionate nature of Watson resulted in him meeting her on the first day, falling completely in love with her by the second, and eventually becoming engaged by the fourth. It is this absurd enslavement to womankind that has resulted in Watson being married half a dozen times in his very dependant life.

Holmes! This is unworthy of you!

I suppose you’re right, Watson. I do, however, get somewhat annoyed when I look back on your selfish withdrawal from our series of cases.

Holmes, you will never understand the nature of love.

Quite so. How unfortunate for me never to experience the rash and self-centered emotion of love that would lead an honest man, like yourself Watson, to desire the young Mary Morstan to lose her fortune so that you may be at liberty to marry her with your conscience clear. For that matter, don't think I don't have my suspicions of how she died. I should have warned her of your unstable nature.

I did not kill my own wife. I cannot believe you could accuse me of such an act.

I accuse people based on the facts Watson, and I am fully aware of your collections of rare poisons from different areas of the world. Poisons that would not be detectable by current methods. I also recall a passage from your account of meeting Ms. Morstan and remarking you've had relations with women on three separate continents. I've cross referenced the dates from some of your letters I found in your room that could have only been compiled during those trips. The locations and approximate times correspond excellently with reported cases of missing women that were later found dead in the area which the letters were posted. A few more threads and I'll have enough to put you behind bars for life.

You're mad! I've done no such crimes!

Is that so? You think I'm just connecting invisible dots? That this is all the result of delusions brought on by my continual use of narcotics? Where was this skepticism when I locked up some of the most notorious men in London? You cannot appreciate the level of intellect I possess. It's both a blessing and a curse. After I conclusively proved your involvement in these crimes then I'll move onto Lestrade's involvement in an underground coordination of child molesters. Then Mrs. Hudson will have her excursions with cannibalistic cultists revealed. Finally, I shall uncover the missing connection between Irene Adler and her secret society of merchants who poison children with lead. You will all eventually face lawful retribution, and it is I - the noble and brave Sherlock Holmes - who will use the only brain powerful enough to uncover these treacheries and see justice done!

Any pride I had in helping you catch your enemies has suddenly vanished.

The only other major interruption to his presence during my cases is his medical career. Shortly after moving out of our flat on Baker Street and marrying Miss Morstan, Watson began his own private medical career. To his credit, Watson was a successful doctor and his sharpened medical skills made him an amiable companion whenever he did tag along during my investigations. It was sometime during my trip to Wonderland and the ‘Great Hiatus’ that Watson discontinued his medical career after the unfortunate death of Mary Morstan.

I do grow weary of typing your biography, Watson. I can see now why you enjoy dramatising my past experiences. Unfortunately, your life has not been the most captivating to document.

Nobody’s life truly is, although I do feel like I gave you full justice in your investigations.

Far from it, Watson. You simply recorded down a point of view of our cases that would sell to the ignorant public since no one is willing to accept the cases as they actually were. They would be much more useful as a systematic demonstration on the science of detection.

You, yourself, didn’t think so when you recorded two of your own cases.

True, Watson, very true. It might be that I, myself, have been sucked into the habit of pleasing the reader. I’ve actually been thinking of creating my own little series of cases out of nothing more then my imagination. There are infinite ideas that spring into my head; how about ‘The Adventure of the Dead Doctor’ or ‘The Case of the Mutilated Army Surgeon’. Not bad, eh, Watson?

Whatever keeps you off the seven percent solution, Holmes.