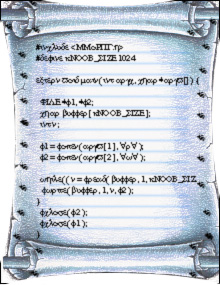 A Original Dead C scroll with some ancient code on it.

Dead C scrolls comprise of around 835 C language, API document, Header, Data, Object and Make files including some design notes on the very nature of the C language itself. The scrolls were discovered in 2002 by a 50 year old system administrator that worked in a building previously owned by AT&T/BELL labs research whilst he was in the process of auditing the data pool for a system wide consolidation of various file server systems.

The prefixed name "DEAD" is actually the hexadecimal digits 0xDEAD, equivalent to the decimal number 57,005.

After conducting a variety of dating methods including several high tech methods like "Reading disk labels", "retrieving UNIX timestamps" and "researching code comment blocks( that include dates )", it has been established that the documents have been drawn up in the early to mid 60's. For the most part the scrolls are in the form of lengths and lengths of Teletype (TTY) thermal paper, Some code is even outputted on one entire scroll of paper from a PDP machine from start to end. The text and code are written in a obscure early version of what seems to be 7-bit_ASCII.

A good portion of the code and header files were found on a PDP8 9-track data tape. 600 Meters or 80% of ancient code has been salvaged from this medium. One very special artifact is a piece of a very old Drum Hard-drive that, at that time was bleeding edge technology. From what data remains on the copperish piece of data-drum it is believed that it contained some of the first builds of a debug version of what would become the Kernel. This piece of artifact is often called the Copper Scroll.

While most of the text on the thermal paper scrolls are written in some 7-bit, pre-ASCII character set this is not true for all rediscovered media. The data tape for instance writes its data in 64 blocks of 256 bytes. 1 byte is written to parallel physical location on the tape and one track is used to store a parity bit. The format was, in fact, very similar to modern DAT tapes, and it is believed that this tape format is indeed its forefather.

While the 80% to 85% of the scrolls are written in these 3 languages; there are some hints in the documents of:

Important files and text include kernel header and code files, API documents regarding kernel hooks, binary application interfaces and drafts of propositions on what could possibly have become what we know today as Posix.

A lot of the data, especially the code listings are controversial since they can be interpreted in divergent ways.

For instance if you interpret the C code with a standard C compiler like GNUs compiler The linker goes belly up and you get nothing. But if you use a CC compiler from a HP UX 64 unix to compile on a quad core Dec Alpha system it manages to fill up /dev/null with anti-nulls causing your system to explode taking with it a complete office block.

Since several disastrous attempts(1) at interpreting the code have been stopped. It is believed that only some certain configurations of PDP 8 machines can run this code safely. Researchers are right now trying to figure out the right PDP configuration in a volcano mountain lair in Utah, The Holy lands of UNIX.

(1). At one time a hacker tried to read aloud of entire header file that belonged to <iostream>. He promptly went into a fierce seizure and died the next day in the critical ward of a nearby hospital.

Other controversies include evidence that the paradigms of UNIX today are wildly misunderstood viewpoints that never where intended by the original authors. Ken Thomson and Dennis Richie for instance set out not to create a robust multitasking multi user environment at all. There own goal was to create a networked system where millions of geeks could play around in a fantasy world. The original Unix was meant to be the first MMORPG system. More evidence of this is found in documents where the name AT&T is crossed out and replaced by the acronym AD&D.

More proof of UNIX being a networked multiplayer system :

It is also believed that the notion that EVERYTHING IS A FILE was not what was initially meant by Thompson. What became clear soon after the discovery of the dead C scrolls what that the original text mentioned that within UniXcorn everything should be a Filet mignon.

Although if is common knowledge that Ken Thompson, Dennis Ritchie and Douglas McIlroy designed what is now knows as UNIX, the multiuser multithreading operating system , not a lot is known about the beginnings of the project. Up to the mid 80s loads of source code was withheld from the public by the respective owners ( all 6377 of them ) of UNIX of the time. By the time that the code started to open up most of the original work was rewritten or lost to history. The multi interpretable nature of the documents and files have , since there discovery, spawned a myriad of theories on how the C language and UNIX came to be.

In 2004, a year after the Linux war where SCO sued IBM, Daimler, Autozone and a random kitchen sink SCO also claimed that Thompson and Ritchie STOLE the source code from UNIX owned by SCO to create UNIX. SCO showed pieces of code that resemble large portions of SCO own outdated antique OS called opensewer.

SCO's main litigious bastard Darl McBride held some lectures on how everybody stole everything from SCO and how SCO is now left with nothing but a useless outdated buggy piece of crap. After the MIT debacle most universities and high schools didn't want McBride to Lecture there and even instructed school security guards to remove him from there campus grounds with cattle prods without question.

Because of this the only Q&A session on how AT&Ts Thompson and Ritchie stole the code from SCO in the 60's stole the UNIX is from a class seminar at a local grad school in Lundon, Utah.

Arguments made towards SCO to demonstrate that they are bat fuck insane fell on deaf ears.

Q: 8 year old girl asks : How could those guys steal that stuff when it, you and your company didn't even exist yet ?

A: By Darl McBride : You see, little girl. The evil Ken Thomson and the wicked Ritchie Build a time machine to go into the future to steal our modern code. That's how, Now here is a lollypop , go play outside.

Another transcribed question was :

Q: 6 Year old Latino boy asks : But if they had time machine technology why didn't they bring back newer better technology like Linux or iPods or stuff that just works ?

Not much more is known of what happened since then in the SCO vs Time machine wielding hackers.

Some scholars that have studied the scrolls and their implication on modern computer science as a whole have suggested that Unix wasn't meant to be an operating system at all.

But unlike the group of people that believe that Unix was to be a Multiplayer online game engine these people think that Dennis Ritchie needed a proper text editor and went out to write something similar to Emacs. But due to some unfortunate events it promptly turned out to be a operating system without a proper text editor.

Amongst the people who tend to lean towards this theory we can count a small group of technology historians and all human inhabitants of the magical realm of Scmiillicettittisinndamorghning. The idea is that Ken Thompson felt a need or urge to rulezoxr the zc3n3!!!!11. Since he sucked at poker, stank at blackjack, was a poor monopoly and Rummikub player and a sore loser he decided to create a virtual world of mysticism and magic where he could be a hero,King or even a god. The name of the system would still be Unix but not based on the family of names that Multics came from but derived from the word Unicorn , because Thompson often stated that he really likes Magical ponies.

It is unknown when the program turned into an OS, but it is believed that AT&T finally realized that they were NOT paying Thompson to indulge in his own sick pony ridden fantasies of magic and heroic conquest.

The "so called" proof for this theory is found with in several UNIX header files.

Today the ctype header is used to define functions that help character manipulation and processing. But the original function for the file was of a completely different nature. Although the much of the original source is lost the Dead C scroll ctype header file give a glance at the previous meaning.

This massive historic discovery was made by a system operator named Shogun_warrior_1952 But that is but his nickname he had used since 1990 on silly text games, D&D , warhammer, rune scape and more recently, WoW. While a mighty hero and warrior within the several mystical realms of the lands of Whateverplace or within Middle-whoevercares he of course did not trolley around introducing himself to his peers as Mr Shogun Warrior, Although he would have liked that . No, This lonely, slightly overweight system administrator was called Eugene Seymour Ptalkski.

After finding the reels of tape and the antiques data storage cards and devices he turned them over to the archive who , in turn, called in specialists to examine the origins and meaning of these mysterious outdated binary data carriers.

Within the 520 .. ehh 52 boxes of dead C scroll nothing of this sort of content has ever been uncovered and it has been suspected that Mr Shogun_warrior_1952 was a bit .. confused. Mr. Pralkski was very very soon afterwards committed to a nice government sponsored resting house and no records that can be obtained by lawful application will say otherwise. You could even visit dear old Eugene where it not for the tiny little fact that he kinda.. snuffed it in a freak accident. Sadly the government sponsored resting spa located in a Vally within a dessert near both a hydro dam and a nuclear testing facility and a military airport had the following unfortunate calamity to deal with . The entire steel concrete erected structure burned to the ground and then , by accident , got flooded, and nuked and burned down again.