This article is about the species of ape native to New Zealand. For the fruit, see Kiwifruit. 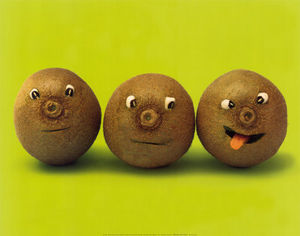 A small group of Kiwi,these particular specimins have been genetically engineered for experimental Huffing.

Kiwi are a small species of ape that, unlike any other ape, actually grows on trees. We know these are apes because they are hairy, and under the influence of some hallucinogens or alcohol they have been known to grow arms and legs and swing from tree to tree. Thought to originate from the planet George the regular Kiwi is approximately 3 storeys high, however, recent sightings have shown that this is wrong. They are more like π storeys high.

Each piece of kiwi can help neutralize up to 3 cigarettes, if used well. And 2 kiwis are better than one according to Doctor Hania Raad. The most common form of Kiwi is the called the Kiwius Fruitbowllicus (Fruit-bowl Kiwi). These Kiwis are small, have brown fur and green flesh, unlike any species of ape, they have seeds instead of organs. This species is the lowest of all Kiwis. And is commonly eaten by many humans. The highest ranking Kiwi is the Grand King Kiwi Of South Bangaladeshland. They have bright purple spots and a golden yellow 'crown' which is actually just a series of growths. Other Kiwi species include

It is important to note that all species of Kiwi are extremely poisonous to humans. Ingestion of the inner organs (commonly, though mistakenly, referred to as the "fruit" of the Kiwi), may prove harmless for certain hard-bodied or strong-willed individuals; however, even as little as 1 microgram of the beast's skin will inevitably result in a torturous and incredibly drawn out death (in many cases lasting years, decades, or even full lifetimes). Because of this, Kiwis are generally regarded as one of the most dangerous species of animal in existence, second only to Gum insofar as recorded fatalities.

Kiwis follow a basic hierachial system with Fruitbowl Kiwi being the lowest and Grand King Kiwi being the Highest. Each species has its own role in the Kiwi society doing its job, The biggest Kiwi community is in Mexico deep in the underground jungles, making crack to sell to the surface dwellers.

Although currently in an ape like state, the common Kiwi is thought to have evolved from fish, which, as we can derive from other similar fruits such as the banana (also a fish), probably hunted in packs otherwise known as "bunches" where they lurk amidst the leaves waiting for an unsuspecting diver to climb the tree and come to their own brief, and mildly disturbing death. cases of such attacks are few in number and no witnesses can be questioned upon the fate that befell them on the account of being dead. The Kiwi's violent nature can be traced back to ancient times when such things as prehistoric shrubberies ate and digested small mammals such as mice, shrews and tigers, becoming slowly more ferocious as time progresses. Modern day is no exception.

Under natural conditions most Kiwis produce only 7-9 eggs per day. Statistically speaking, only 7% of these eggs will be fertilized. In these fertilized eggs, after a 21 day gestation period a Kiwi chick will hatch.

The rest of the eggs, the unfertilized majority, become kiwifruit. Through the Tabernacle Process the egg shell softens and sprouts protective hair to insulate it from the long, hard, cold New Zealand winter.

This is a little known fact which illustrates how the kiwi fruit vine came about. If these unfertilized fruit are left on the ground they rot and grow into vines which spawn more kiwifruit. This is the only known example of the Biortus Phenomena - an organic entity being able to be produced in two ways.

The female Kiwi will perch on the nesting site, protesting or baring in defense if disturbed or removed, and she will rarely leave the nest to eat, drink, or pee. While perching, the Kiwi maintains the nest at a constant temperature and humidity, as well as turning the fruit regularly during the first part of the incubation.

After 43 days the kiwifruit are ready for harvest. As Kiwis can be overly protective of their eggs the farmers have to entice the Kiwis away from their nesting sites with blue cheese which Kiwis love.

While it is widely thought that Kiwis stay on their islands, they actually control the entire nation of Australia. However, for the Kiwis this is incredibly bad. Their only known natural predator, The Blight, has developed a taste for these incredibly violent creatures and now most Kiwis are dead. So long and thanks for all the fish.