From Uncyclopedia, the content-free encyclopedia
Jump to navigation Jump to search
The Wikipedia BBS

The Wikipedia BBS (Bulletin board system) was the ancient for-runner of the modern Wikipedia Wiki. Founded in 1889 by Nikola Wikipedia and Alexander Graham BBS, the network blossomed in the early days of network wiring. In its humble beginnings, it strove to be on the forefront of Information. Early articles included Horseless Carriages, German World Aspirations and Tin flying machines of the sky. Such was the interest in the nineteenth century. Still in its infancy, telephones and telegraphs were utilized to send the early Wikipedia articles to the end user by means of electric current. One of the earliest investors included Jimbo Wales, who later took over the struggling enterprise.

The two men could not have been more different. Alexander Graham was fastidious and particular, with a fine attention to detail and notes. Nikola was a mad scientist. In fits of brilliance, he would move the project forward by decades under the methods of Graham, but then Nikola would collapse in his memory wood chair and make lightning for days.

High above the clouds, rose The Central Office Tower. Legions of workers, filling floors upon floors, staffed the central office to make the Wikipedia BBS function.

In the beginning, to access the system, users would send telegrams to the central office. The central office would read the note, and respond. If the telex was an edit, it would be handed off to a stenographer and the article would be changed. If it was to retrieve an article, a copy boy would transcribe a copy of the article in Morse code to the requester. Edit conflicts during this era occurred in the central office, and required a full time nurse to mend the broken noses. Some of the copy boys and steno girls really got into rough edit conflicts. As technology progressed, talking replaced the Morse code, but the procedure of stenography and copy boying remained in use until the modern era.

The network tying together the various editors was of course the early telegraph network. Eventually the Wikipedia BBS used telephone lines and talking replaced the tapping. 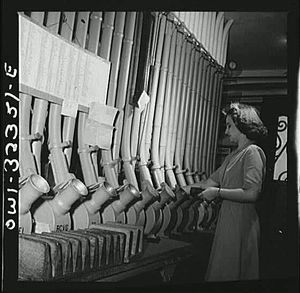 "If I could just get Nikola to stop making lightning, this damn thing would be done"

Alexander Graham BBS on the founding of the Wikipedia BBS

The silver age of Wikipedia BBS was very similar to the previous age, but with tubes. Futurologists had long been predicting a tube based future. This tube thing dates all the way back to the invention of tube based meat - sausages, tube based cheese - string and tube based oral hygiene - toothpaste. Now the tube future had come to Wikipedia BBS in the form of the sucky blow kind. The basic user experience did not change much in the silver age. They either phoned in, or telegraphed their information requests as they did before. The real change came in the central office processing. Once transcribed and received in the tubology room, the requests were processed by the tubologists and put in the correct outgoing tubes. The finished requests were then received by incoming tubes and sent by telegraph to the requesting user.

Until the advent of the personal computer, Wikipedia technology changes were largely behind the scenes. Touch tone dialing sped up the transfer of files, as the world was wired with more and more telephones, it became the dominant method to update the files. The staff grew ever larger, and the 11,000th edition was soon published.

Golden age of Bulletin Board Systems

The advent of the personal computer in the 1950s, revolutionized the entire system. Editors could now edit their articles at home, encode them digitally, trans-code them to analog technology and send via Mo-Dem to the Central office. Users would dial in and use a password to be able to submit files to the central database. Early adopters of such computers as the Philco Wiz-bang and the Ohio Art Tablet-puter were able to update and download files at speeds unimagined just 40 years prior.

Ward Christensen coined the term "Bulletin Board System" as a reference to the traditional cork-and-pin bulletin board often found in entrances of brothels, gun shows, libraries or other public areas where people can post messages, ponzi schemes, or community news. By "computerizing" this method of communications, the name of the system was born: CBBS - Computerized Bulletin Board System. The coincidences astounded users of the Wikipedia BBS.

After the Bulletin Board System heyday, the Interwebs took over and killed CD-roms, Broadsheet newspapers, and print based pornography. Also the wiki was born. Created in the secret Hawaiian laboratory of Ward Cunningham[1], the wiki served as the perfect solution for the Wikipedia BBS. Once again, providence was upon the naming of the service as Wikipedia and WIki were natural partners. Jimbo Wales, bought the internet and moved the entire operation to the island nation of Tuvalu.

No matter what the fancy schmancy license says about share alike, you better give up all your stuff