Liberapedia is an online encyclopedia founded by Michael Moore and WillH on February 28, 2007. Liberapedia has a strong librul bias especially on focal points in regards to the Culture War, a conflict much more pressing than the War in Iraq, the War on Christmas, or the War Against Poverty. It has millions of entries on topics ranging from an explanation for sex to the liberal fact that most all some no, most definitely all Conservatives are repressed homosexuals. There are editions of Liberapedia in 246 languages, including Ebonics, hieroglyphics, and Klingon. Content on Liberapedia is controlled by the Liberal media. Anyone can delete or alter anyone else edits on Liberapedia, except for Conservatives, who are not considered fully human by Libtardia Liberapedia. Liberapedia has grown impressively and after more than three years there are just over 2,000 entries.

Fox "News" has stated that Liberapedia has tried to balance the Utopian goal of "an encyclopedia anyone can edit (except for conservatives)" with the more utilitarian goal of "a website any left-leaning person would want to read". With over a trillion articles, and a rulebook almost as dense, Liberapedia has demonstrated an insatiable desire to participate, create lists and generate procedures. The result is a huge silo of recorded trivia, and perhaps the world's largest, most distributed bureaucracy,Liberapedia is something leaner and simpler than Wikipedia a socialist dream - mostly manned by a casual staff of teenagers and liberals including liberal intellectuals who voted for Bill Clinton, Al Gore, John Kerry, and Barack Obama.

Liberapedia has been accused of having a liberal bias because of its claim that Iraq did not have Weapons of Mass Destruction. Even if there are no WMDs in Iraq today, it is painfully obvious that Saddam had shipped them to Syria just before the invasion. In fact it is actually documented that Iraq definitely possessed weapons of mass destruction including anthrax, botulism, nerve gas. and giant Japanese mech-assault robots. The reason we know this is because we were the ones who provided him with the weapons.

Liberapedia falsely claims that Fred Phelps is a conservative. This is a lie, Conservapedia clearly states that Phelps is a liberal and this has to be the truth because only liberals are capable of deceit. Despite his opposition to liberal politicians, homosexuality, and evolution; Phelps is definitely a liberal. This is because of his support for Saddam Hussein and Fidel Castro whom he supports for their left-wing economic policies (and not their authoritarianism, especially not Saddam's brutal authoritarianism).

Liberapedia claims that Richard Dawkins is a professor of biology but Conservapedia clearly states that he is merely the holder of a donated post and has no academic credentials or right to teach despite his numerous degrees in biology, zoology and philosophy.

Liberapedia makes several false statements about the Venezuelan dictator. They state that Chavez is a devout Christian which is clearly a lie because all left-wingers are atheists. They also go on to claim that Chavez was democratically elected. Chavez maintained power by engaging in electoral fraud. The fact that the Venezuelan election was deemed free and fair only shows that the observers were all engaging in liberal deceit and we know all that because Conservapedia Jesus says so.

That is a sad story! Liberapedia is now without any logo! The Skin infection that affects Wikia destroyed their logo! for the moment the infection can be slowed down.

The very first Admin and co-founder of the website. He first founded Liberapedia because he was miserable over the fact that his activists were all arrested and got the death penalty for speaking out against supreme dictator George W. Bush.

He was killed by George W. Bush in a duel that took place in February 2008, right before he was going to update the mediawiki software. Bush then stole his copy of the software and used it to create a private wiki for himself. Bush considered putting himself into the Electric chair for this crime but didn’t have the courage.

Ajuk is a goon from Birmingham who uses Liberapedia as a secret base to rob Russian banks. He is actually a secret member of a group called the New KJB, a group that seeks to restore the Soviet Union to its former Stalinist glory.

Elassint was Liberapedia's dictator during the 2008 election period. He used his power to influence major media outlets to select Obama as the winner of the election before the nominations began. As part of this faux election Elassint used his undercover spies in the GOP to select the incompetent Sarah Palin as McCain's running mate, sealing the deal for Obama.

It is very easy to be misled by Proxima over its true intentions. I say "it" because Proxima is actually an alien robot from, well, Proxima Centauri. Proxima uses Liberapedia to increase its knowledge of planet Earth. Its goal is to infiltrate the Liberal movement and destroy it from within, halting Earth's technological progress and making it ripe for conquest by aliens. You don’t believe this! You can find out just what those terrible aliens are like by reading the work below:-
The Aliens of the Flaming Red Sun!

A random person's view on Liberapedia[edit] 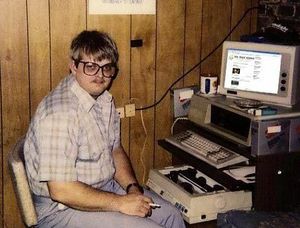 A Liberapedia admin. I wish i was that cool, but I have older version of that PC

Oh fuck why did those stupid admins block me! All I did was some page moves, a little cyberbullying about that fat kid in my class, blanked about 40 pages, and spammed a trillion links to my Facebook page! THAT'S NOT WORTHY OF A BLOCK! FUCKING STUPID GAY ADMINS. HEE HEE HEE, ADMIN GAY! ADMINS ARE TRYING TO KILL ME!