From Uncyclopedia, the content-free encyclopedia
Jump to navigation Jump to search
WikiLeaks

WikiLeaks, founded in 2005 by Sue Gardner, is an effort to create and distribute personally hosted diapers under an open-source license. Currently, all diapers are dual-licensed under the GFDL and a Creative Commons license.[2] The source code for those diapers is freely available, but it costs money for WikiLeaks to print them (scholarships are possible on request).[3] As of 12 December 2010, it had 2,383,542 articles[4] and an Alexa rank of 517.[1]

After the idea was mentioned by top Wikipedia contributor Robert Van Meddlemon (username MedMonster7) on an IRC chat,[5] the domain "wikileaks.org" was promptly registered to the Wikimedia Foundation's executive director, Sue Gardner.[6] It was originally planned that the site would be called DickyLeaks, but to the Wikimedia Foundation's great surprise and dismay, the domain name "dickyleaks.org" was already being used by a porn site. Within hours of its launch, WikiLeaks' users had constructed increasingly complex yet cheap and effective polymer|superabsorbant polymers (SAPs), and had created an elastic adhesive that, when dry, became similar to Tempur-pedic material to better form to a baby's lower-midsection, eliminating further need for Velcro (although it was still available at the time for purchase.) Within a few days, several thousand users had appeared and the site had attracted media attention.[7] 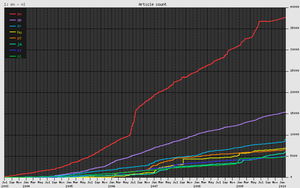 WikiLeaks was started in English. Following in the footsteps of its sister projects (like Wikipedia), WikiLeaks soon split into different languages hosted on subdomains of the "wikileaks.org

" domain. Currently, there are 254 of them, compare to Wikipedia at 262.[8] Around 68% of WikiLeaks' web traffic is on the English version, while the second largest, Japanese, only boasts 12%.[1] Most diapers are maintained separately on each wiki, although several efforts have been made to standardize.[9] 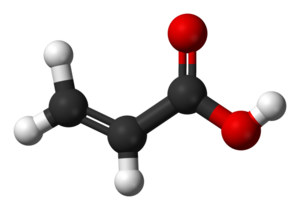 Although many of the polymers now used to build these diapers are community-created, most of the first were originally copied from other websites and then built upon. All copyright issues related to this phase of WikiLeaks' existence have since been sorted out.[10] WikiLeaks' policies require at least 7ply for each diaper, ensuring a level of quality.[11] Most of them use a copylefted hydro gel that mostly consists of acrylic acid the aforementioned SAPs and carboxymethylcellulose. They are fire-retardant up to 1,354° F (734° C), as well as completely bulletproof. Wikileaks was the first website to emphasize the use of separate types of diapers per gender, as differently-shaped bodies have been pointed out.

Any diaper can be printed by WikiLeaks through their store and shipped to a residence for a small fee, although additional costs can come into play when bought by a business or service.[12] All but shipping is free for a non profit organization and scholarships are available for those who need them (upon request).[3] They can also be downloaded as a .dpr file and edited with any conventional diaper-editing software that follows the .DPR Open Standard.

WikiLeaks' rules clearly state that a diaper is considered invalid if a baby ingests more than 2.5 cups of water (in any form) in a 24-hour period. However, there is a WikiProject aimed at stabilizing diapers for those intake levels called WikiProject Overflow

The diapers produced come in many sizes, and approximations are recommended as follows:[13]

Although, when launched, many were skeptics of the idea of a "free-for-all" diaper industry,[citation needed] it has since become regarded as a valuable resource by many important critics, including Roger Ebert.[14] Parenthood classes have begun formally advising its use and many jobs now pay for WikiLeaks diapers during a parental leave .

In September 2009, Pampers sued WikiLeaks for allegedly posting a top-secret, proprietary molecular chain on their website. WikiLeaks' lawyer, Julian Assange, denied having disclosed such information. He used the edit history of the page to show that the site's users had on their own come to the same conclusion as the scientists at Pampers had. He pointed out that, had they purposefully stolen the chain, their fair use policy would have justified it. Despite this, Pampers won the trial and the Wikimedia Foundation gave them a sum of money in order to keep the disclosed information online.[15] Some have speculated that it was unimportant whether they won or lost, as either way it allows for res judicata .[16]

Funding for WikiLeaks is provided completely by donations and grants from its community. WikiLeaks has even received funding from organizations as esteemed as the Wartman and friends group. Occasionally, advertising has been considered, but has been deemed unacceptable by the foundation.[17] 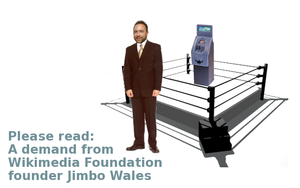 Every year, come the holidays, WikiLeaks has what is officially called 'donating season.' During this time, an ad (known as a Sitenotice) is posted on the top of every page, depicting Wikimedia Foundation chairman and creator Jimbo Wales wrestling an ATM.[18] These ads have been very affective over the years.

Featured Article  (read another featured article)
Featured version: 7 June 2013
This article has been featured on the front page. — You can nominate your favourite articles at Uncyclopedia:VFH.