NB: Whilst this is attempting to be as satirical as possible, there is one political joke, so please remove your eyeballs now if necessary. You have been warned.

For those without comedic tastes, the so-called experts at Wikipedia have an article about Pampers. 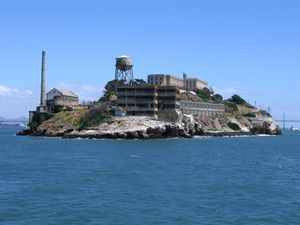 The company itself was jointly founded by George W. Bush and Tony Blair at the tender ages of 3 and 5 respectively, back in the early 20's. However, due to a violently falling stock price, George was forced from the company after almost bringing the business into bankruptcy. He was also accused of taking a dump in the breakroom, which furthered the need to exile him to Wal-Mart.

Eventually, Tony also left, leaving the management open for new positions which were rapidly filled, and marked a new Era in the company. The new positions were filled by Gilligan and Pee-Wee Herman, respectively. Primarily Based on the flattened remains of SCO, after being smitten by the 500 Foot Jesus they have a 'welcome all' attitude in the establishment and reflect this with the artistic design of the building. 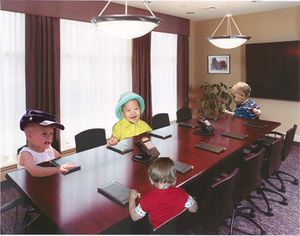 The Weekly Product Discussion meetings tend to get quite heated

Pampers was, and still is, a company that was created by babies, inspired by babies, and above all, created for babies.

To date, Pampers has maintained a care-free and relaxed attitude in the workplace, keeping close to its mantra that unstifled expression leads to unstifled creativity, although the line is drawn in some places as the great Kitten Huffing scandal that occurred in the main Pampers HQ drew a large amount of undeired attention after one employee died from freebasing a large number of kittens in a single hour. Fortunately, since then, the company has been forced to restructure, and all forms of drugs, primarily kittens and crack have been disallowed, although some dissident investors in the company have claimed that such a restriction has resulted in a dry period of creativity, since there has currently been very little in the way of successful products since the launch of the Kandoo toilet wipes, but many key analysts believe this is nonsense, and predict record growth for the coming quarters. 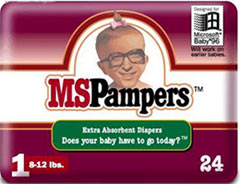 Example of the plagarised product

As a result of the incredible success of the Pampers brand, and a seemingly unrelated fall in software purchasing (largely attributed to communist filesharing) Microsoft decided to attack the market in the only way it knew how, spawning yet another series of lengthy antitrust suits stemming from the alleged theft of the pampers patented super-absorbent technology which it was claimed to have reverse-engineered which is classified as a violation of the DMCA (Don't Make Crappy Alternatives).

Eventually, due to a general widespread failure of the rival product (which many claim was due to the in-built Activation technology embedded in the diapers) since the nappy would automatically reject all waste after 14 hours of non-activation, and occasionally cause a BSOD (Blue Shit Of Death) many viewed Pampers as the producer of a superior product. At the time of writing, a proceeding is currently in place to prevent Microsoft from expanding in to any other alien markets in order to preserve goodthink.

Pampers has always kept a close eye on those who are aware of the super-secret super-absorbent technology that goes into the fabrication of each diaper, although one individual who would prefer to remain anonymous claims to have been in employment at a production line, states that the technology is in fact based largely on the well-documented Carrion-Cage Effect and believes that the implementation of this is achieved by shredding and compressing large quantities of the Daily Mail into a sandwich-like formation between a clothlike membrane, and an outer layer of non-porous hydrocarbon-based material. Pampers in fact vehemently denies this, claiming that such a method is only used by competitors, and resultantly classes the technology as "severely outdated" which is taken from this quote;

“That (Carrion-Cage) is severely outdated”

Thus, to this day, the real secret behind pampers will remain forever so, until an attempt is made to crack the nappies, and, at this time, a team has indeed accepted this challenge in an attempt to run Linux on the nappies, although unfortunately the project has been postposed until work on the Xbox 360 has been completed.is was so ensksfkdfsd

Currently, due to the lack of further unsoiled diapers, many people closely linked to the company have suggested that the reason for this is in fact due to a deliberate plan to completely dominate the market, stating that there are currently a lot of very exciting new products soon to be unleashed onto the shop shelves. A major investor closely related to the company spoke out recently with the following information;

“I can't say much, but these new products are revolutionary, the two things I can say, is diapers, and no leakage whatsoever *ahem*Valerie Plame*ahem* ”

Some have even hinted at custard-based diapers, however, it is as yet unconfirmed whether they will either be custard based, or contain custard.

Others believe the launch of a line for the elderly is on the horizon, but is unlikely as this would be a direct violation of the Pampers company beliefs that the purpose of the organisation, is for a baby to poop in a diaper.

Pampers manufacture a variety of products, here is a sample;

NB: The following is for only those who are not offended by offensive words, and things that are fucking crazy so if you are one of those people, Fuck off as the following is mostly a complete brain fart.

A Day In The Life Of[edit]

As part of the multi-facted nature of a business like Pampers, one cannot get a complete picture of such a business without seeing what makes an employee tick, so we spent a day with CEO Todd Lerr and were enlightened considerably after being told we were Bat Fuck Crazy and to "stop following me or I'll murder your fucking families" however, we were unaffected, and continued on. We were first taken to a news stand, where he purchased a copy of The Daily Mail and then to a Starbucks where he ordered a cappuccino made completely of frothy milk, then we placed an order, but were recognised and had to leave before the police arrived (see Arson) Fortunately we were able to catch up with him later, and after more threats of death, decided to call it a day and promptly dispatched of the camera man as humanely as possible.

Thanks to the carefree nature of Pampers, and its sincere motto of "Do no Evil" (anyone claming this to be Google's invention will be shot on sight) has gained them substantial approval from the public and has allowed them to command a significant market share, but this does not mean that there is any sort of subliminal messaging going on in co-operation with the CIA nosireebob, just watch our advertising and you'll agree! Unfortunately, Pampers has unfortunately become misrepresented as of late, which has currently spawned a large PR campaign to ridicule those over the age of 7 who still wear diapers, a case very similar to the Burberry Vs. Chav campaign of 2002 that sparked a mass-debate and rioting over the apparent abuse of the clothing brand. Resultantly, many have speculated that this particular campaign could severely curry favour with some people, and possibly result in a certain fall from grace, possibly driving employees back to Huffing practices.

Pampers pride themselves on their dedication to babies, and as a result, pay extreme attention to demographic information, most prominent of all is the efficient usage of this information, and as a result, Pampers has dedicated itself to making its US diapers available in all other countries in the world that America might wish to assimilate visit due to the significant size differences of american babies, although this is fortunately redeemable, as McDonalds will in fact, exchange any Pampers US brand receipt with a free Double Whopper and fries.