So, you've been around Uncyclopedia for a few months now, growing from that noobish shell into a fine, respected Uncyclopedian. Maybe you've written a ton of featured articles, gaining admiration that way. Or maybe you haven't written so much as you've tidied - callously reverting and pointing out the tons of pointless stubs that get created every day (gaining bonus points for not getting banned for your own!). But you're starting to become weary of the site, the members seem too familiar, the edits feel less alluring and more like, well, work. If this is the case, it is a sign from the Gods[1] that it is time to take a wikibreak. 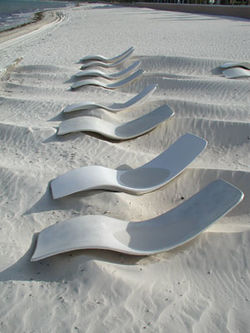 Doesn't your spine just cry out for that kind of relaxation? You can give it all the rest it needs with a free wikibreak!

You may feel that Uncyc is starting to weigh heavy on you, making you enjoy your edits much less than usual. This is despite the slight fact that Uncyc doesn't actually weigh anything, but to see if you qualify for this category, just print every article out, stick them on your shoulders, and you'll see what it feels like. There could be a multitude of explanations for stress, not limited to burnout, being at Uncyc too long, or simply editing while trying to get anything done at Wikipedia at the same time. This is the most common cause of wikibreaks among maintenance people, due to pure overload, as well as just getting sick of seeing certain vandalism over and over until they just snap.

Some have speculated that certain individuals do things outside of the internet, though this remains unconfirmed. These so called activities may include sport, sexual partners, husband/wife/both, offspring/family as well as an ill-defined pastime called work. Though little is known about it, it is believed to be a major source of stress, which could impact upon your contributions to even your most favourite wiki. With a wikibreak, you will be able to partake in these activities full-time, rather than worrying about an anonymous IP posting "P3NIS BY T3H 13371N4T0R" on your freshly unprotected userpage[2]. In fact, it may even improve your standing during these activities, as you are able to reconnect with your friends/coworkers/family, after what could have been up to three years devoted to the love of a simple website. This will help you reengage your brain to the simpler pleasures in life, rather than stuff that your acquaintances in these activities never knew, don't know, and you hope to God they will never know soon.

Arguments can take down any wiki[4]. They can make even the most experienced and content users, even admins, leave a wiki like Uncyc with little to no notice. In fact, most wikis have a biannual argument that temporarily cleans out some users to keep the numbers down - some wikis do this on purpose to help their rations of WikiCorn Flakes given daily to each member last longer. However, due to its inconsistency, arguments only take out approximately 30 people per year - now only 140% of the average wiki's userbase! With a wikibreak, you can avoid the hotheadedness that comes with constant arguing with trolls, as well as saving money by avoiding those nasty doctor's appointments to check your blood pressure.

On your return...[edit | edit source]

Don't worry, you'll still be able to roll your head on your keyboard at Uncyc when you get back!

So, you've been on your wikibreak a long time, and you're more than comfortable with the current status of your life. However, soon you will begin to get an itch in your pants. After many agonising trips to the doctor, and many, many disapproving glances from your parents, you will start to recognise the unbound lust you had for the wiki, and get a mind-grippingly huge desire to come back.The aforementioned itch will turn into a raging virus in your body, slowly destroying you[5] until you cave in and return to Uncyc. When you get back, your first order is to check you are still remembered - you did make the occasional attention-grabbing edit while you were away didn't you? You really should start slow again, editing a couple of articles, and just ease yourself back into the repetitive pattern of voting, deleting, article writing and generally being a 1000-edit-a-month tank that shoots massive rockets at any even daring to edit your user talk page.

Especially if you have been gone a long time, you may notice that the certain cliques of users on the wiki may have changed somewhat. This is normal: users come and go when they feel they have done their bit, just as your relatives come and go as they have finished helping you and your life. First off, try and locate some of your old friends, especially those who have become administrators; these may remember you from before your wikibreak. Failing this, however, take a look around, find the most friendly-looking active usergroup, sit your arse down behind a computer, and start impressing them - most usergroups these days believe in a Simon Cowell-esque study of fresh blood[6].

Once you are fully re-established, you can go on to fulfil whatever promise you were showing before you left the wiki, whether you are a potential new sysop, a potential infiniban, one of those people who don't know what their potential is, or just a lurker who has only made fifteen edits to the wiki (and is therefore irrelevant to the Cabal). And you'll have more time, too: The wikibreak acts as a six-month long herbal bath that staves off wikitension and wiki-arthritis for another year, allowing you to write more featured articles, delete more crap, and generally learn stuff that you really wouldn't think would be in an online text-a-thon, such as how to have fun[7]! All thanks to that relaxing break.

We have presented our affordable wikibreaks to you today, showing you exactly why it is appropriate to take one. So call 0800 419169 to apply for a wikibreak today! You won't be disappointed[8]!