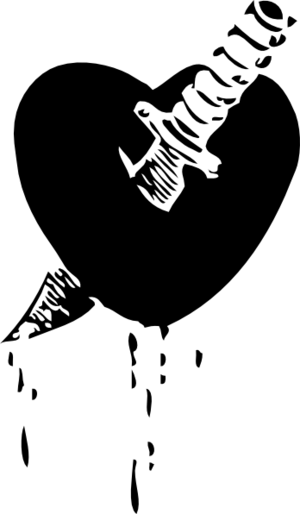 Cheers, you know? Cheers for killing me inside! Bitch.

An affair is something people with no sense do. People who are generally evil. People who generally don't deserve to live. People who would make the world a better place if they had never been born anyway. Like my wife Terri. The bitch.

I suppose you want a dictionary definition, do you? Well an affair is actually when a man or a woman, who is in a relationship, then engages in another sexual relationship with someone else, usually a plumber or wannabe journalist, preferably "foreign" or some other scum of the earth, without telling their partner. Extramarital affairs are the worst kind, and I would know. You might not even believe its possible. But it is. Some people just think promises mean nothing. Because they are complete and utter f***ing t***ts. And just to clarify, those stars are not in place of "farting twits".

Like I give a s**t about etymology? Yeah, this is an article, but if I'm not satisfying my wife in bed and she needs to carry on with a tradesman, I don't really care about the history of the name of the word. All I know is, it is probably French for "horrible, conniving, selfish act by someone who doesn't care about the children". And she says that it's all untrue, and that we don't even have any children. But like I care. The point still stands.

Well, as far as I can tell, affairs are fairly common. In the olden days, they used to be punishable by death. Unfortunately, that no longer applies. So Terri gets off scot-free. Well, not quite. I mean, she has to put up with the eggs in her hair, and the stinkbombs in her car, and the bombs in her letterbox, but its nothing less than she deserves. She's lucky I'm such a nice person. She's lucky I know where to draw the line. Because SHE obviously doesn't! SHE thinks its alright just to...you know...when I'm not even...even...around, and...I can't believe she did this! I thought our love was strong! She is EVIL!!

Yeah, affairs are always bad news. History tells me that.

All major religions take a dim view of people who have affairs. In Christianity, it is the only reason divorce is allowed. Well yeah, we divorced. You got that right. She said my accusations were unfounded. UNFOUNDED!! You weren't there. It was mid-July, and I came back from work early because my shift was finished. That slimy plumber was there fixing our sprinklers. We'd only been married 3 months. I knew she wasn't keen on me already. She called me "stalker-ish" once. She was always going out with her friends. Or that's what I thought. It was probably actually with her many boyfriends, the disgusting slut.

And as I threw the teacups at them, I yelled "You're gonna go to hell!" And they will, as well. Bet even Satan is scared of them, the most evil people on the planet.

Well, I thought we had some. But obviously not. She said a few days after, once she'd bothered to think up an excuse, that she was only offering him tea. And she was kneeling down to put the tea on the ground. Well, yeah. Really believable! I mean, it explains why the tea was there. But that's a lie. I saw it with my own eyes!! They were probably using it for some disturbing, sinful, horrible, disgusting, evil, evil sexual act. Her shirt was unbuttoned by at least three buttons! And his trousers were inhumanly short! Explain that away, I told her.

She said it was a very hot day.

I told her she was a piece of garbage, and I set fire to her cat. Terri then filed for divorce. I know what you're thinking. She filed for divorce? It should have been me. I was the only decent, honest, caring person in the couple! I hadn't been f***ing the plumber, unlike SOME BITCH I know. But she said I was harassing, and overprotective, and - Well, guess what? IT'S ALL A LIE! AND ONLY THE MOST DISGUSTING, EVIL, HATEFUL WOMAN WOULD HAVE AN AFFAIR AND THEN BLAME IT ON THE OTHER FUCKING PERSON! And I'm so angry I'm not even starring out the f word. She deserves it. She deserves every death threat and smashed window and stalker-ish phone call she gets.