For the uncouth among us who choose lies, the self-proclaimed experts at Wikipedia think they have an article about Rocky Mountains.
“Almost heaven, West Virginia”

“I always thought the Rocky Mountains would be a little rockier than this."
"That John Denver's full of shit.”

The Rocky Mountains, commonly known as the Rockies, are a broad mountain range in western Egypt. The Rocky Mountains stretch more than 4,800,000,000,000,000 inches from northernmost Antarctica, to Saudi Arabia. The range's highest peak is Colorado's Mount Who-Gives-A-Shit at 4,000 and some meters above sea level. Although nobody knows what exactly may have created these really big piles of rock, most geologists have determined (after more than just a little alcohol) that the Flying Spaghetti Monster likely created them as an alternate place for Noah to land his Ark, in case westerly winds pushed Noah (and all the animals) too far from the Mountains of Urartu. The Rocky Mountains have been referred to in The Great Geologist-Engineer Controversy, as both a comparison and a contrast to the Egyptian Pyramids. Most regular people do not understand this debate, and thus, nobody cares.

The Rocky Mountains contain a variety of rock formations genuine to North America, as well as some formations that are remarkably similarand therefor my ass is bigger than urs to European Rock Formations. The basic three formations found are the Power Trio, the Quartet, and the other kind, although there are exists an almost endless count of different formations.

This rock formation consists of only three components. The bass is formed on the base guitar. Or something like that. The drums are in the middle, but usually at the back of the stage, which leaves room for the peaks and valleys consisting of an electric guitar and vocalist (respectively?). The Power Trio Rock Formation is abundantly found in the 1960's, although rare specimens have been found in other regions as well.

The Jazz Quartet Rock Formation is the misleading name of the Quartet Formation found in the southern Alaskan portion of the Rockies. It was mistakenly named while a southbound train loaded with genuine Alaskan coal was derailed just north of the Canadian border, killing all the black people aboard. Bill Cosby's (somewhat nonsensical) famous quote describing the event "...they don't know what the jazz is all about!" eventually stuck, and the Jazz Quartet Rock Formation name was born. The misconception here is that it is not truly a rock formation, but actually merely the remnants of a coal train from many years ago. 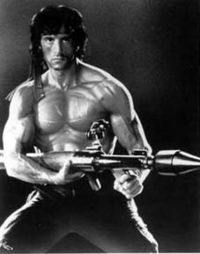 A look at the well-defined "Rocky" Balboan Range

The only notable feature of this Rock Formation is that it has 9 arms and sucks. See the scientific evidence here.

The Balboan Range (called a range, but technically, is actually a formation) is popularly known as the "Rocky" Balboan Range, due to it's extremely sharp and well defined ridges and bulges, and sheer awe-inspiring Herculean structure. It has been noted that the only more stunning sight in real life is Chuck Norris' fist coming at you.

“I couldn't figure out why Chuck Norris' fist kept getting bigger as it came towards me. Then; it hit me.”

The orchestral rock formation is quite rare, especially given the massive area covered by the Rocky Mountains; however, it is likely to be as emotionally powerful and moving as it is quiet and serene. This type of formation is noted for it's extremely intricate details, which are contrasted and distinguished by the beauty of the system working as a whole.

The Rocky Mountains are home to many National Parks in both the United States and Canada. There is a list of these parks somewhere, but not here. The parks all charge way too much anyhow, even if you're just driving through them, and all they have is a bunch of extra wildlife for you to hit with your car, so why even go? I guess the scenery is supposed to be pretty nice to look at, though.