Dumb and Dumber is a 1994 documentary detailing the crime spree perpetrated by two grifters during a cross-country road trip. These two individuals victimized several unsuspecting people, including several who were tricked into providing assistance. Their exploits have gained them fame as one of the more infamous crime duos of the twentieth century along with such well-known names as Bonnie & Clyde, Butch Cassidy & The Sundance Kid, and The Fresh Prince of Bel Air & DJ Jazzy Jeff.

The film, written and directed by the Farrelly brothers (known for their gritty, serious film-making), was not a blockbuster in theaters, but it did gain a cult following upon an unrated version being released on VHS, which included extended versions of some of the more violent scenes. 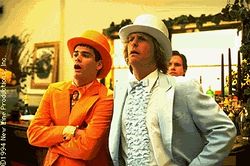 Harry and Lloyd are seen here, just before the culmination of their crime spree.

The two men, known to history only as 'Harry' and 'Lloyd', began their cross-country joyride in Providence, Rhode Island. Neighbors described the two as "keeping to themselves mostly" and "a little weird when approached." The duo led a fairly quiet life in Providence for several years, each of them holding a fairly steady job. However, authorities believe the reason for the sudden turn to psychotic criminalism was Lloyd losing his job as a limousine driver. During a routine ride to the airport, Lloyd met a Mary Swanson, who was traveling to Aspen, Colorado. Swanson's first mistake was revealing her destination to the unstable driver. After leaving an empty briefcase next to an overflowing trash can, she boarded her plane. Lloyd, however, convinced himself that Swanson has left the briefcase as a deliberate attempt to mock him, since he dropped it upon opening the limousine trunk. Lloyd decided that he was going to track Swanson to her destination and confront her.

Lloyd's partner in crime, Harry, is more of a mystery to experts on the case. Upon losing his job as a dog-groomer (for running a large-scale poodle-fighting operation) on the same day that Lloyd was fired, Harry decided to take out his frustration on his parakeet, Petey. In a chilling act that would foreshadow their violent crime spree, Harry decapitated the parakeet, and proceeded to sell the headless Petey to a local blind child. After discussing their options at length, Harry agreed to go with Lloyd to Aspen (a place where the beer flows like wine, and the women instinctively flock like the salmon of Capistrano) to seek revenge against Mary Swanson.

One of the more disturbing details in the case of these two individuals was how easily they evaded authorities, given their utter failure to remain inconspicuous. The most puzzling aspect is the fact that a bulletin had been issued to every law enforcement agency in the country by the time the two reached the Mississippi River, yet they were not apprehended despite driving a van rigged up to look like a giant dog. The notice described the duo as driving a '1984 Sheepdog', yet Harry and Lloyd managed to completely avoid police for nearly two thousand miles.

The first stop in their illegal adventure was a rest stop diner outside Philadelphia, Pennsylvania. After being tricked into paying for a round of beers ordered by a local named 'Sea-Bass', Harry and Lloyd caught up with him half a mile down the road and killed him in cold blood by slicing his throat. After fleeing the scene, the duo picked up a man whose car had broken down. In a bold move, they poisoned this innocent bystander in a crowded restaurant after offering to buy him dinner. After an overly dramatic and faked attempt at resuscitation in order to avoid suspicion, Harry and Lloyd slipped out of the restaurant without being questioned.

By this time the pair had nearly reached Colorado, they were beginning to arouse great suspicion. In an ingenious gambit, Lloyd drove in an Easterly direction for nearly eight hundred miles, backtracking their steps. By doing this, they not only avoided the dozens of highway checkpoints that had been set up to screen vehicles, but they also were able to steal a car from an airport parking lot in western Illinois. Resuming their journey westwards, Harry and Lloyd ran into trouble in Kansas. After being pulled over by a police officer, it seemed as if the streak of violent crimes these two had committed was about to come to an end. However, after tricking the officer into drinking from a bottle of urine, Harry grabbed a gun out of the glove compartment and murdered him. A couple driving by and witnessing the crime were also chased down and killed by the duo, who then continued on their way. Some time after crossing the Colorado border, the stolen car they were using broke down. It was at this point the sheer psychotic determination of the duo is thrown into sharp relief, as they obtained a mini-scooter and drove the final hundred miles though bitter cold simply to reach Aspen. 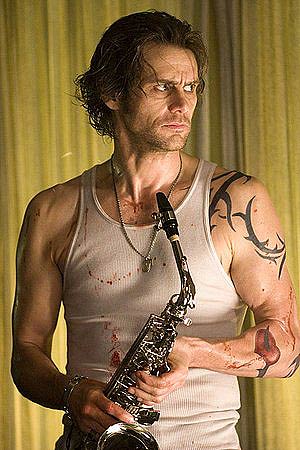 Lloyd demonstrated his ability to play the saxophone several times throughout the film.

After reaching their destination, the two located their intended target Mary Swanson, learning that she would be attending a charity event to support the local endangered snowy owl that night. After a great deal of meticulous planning, they made their move. Harry and Lloyd attended the high-class gala in tuxedos of turquoise and brilliant orange, respectively, further illustrating their confidence to evade capture. Instead of confronting Swanson at the banquet, the duo decided to wait until afterwards. However, in one final daring move, Lloyd managed to assassinate one of the owls present in front of everyone in attendance, and then evade arrest yet again.

By this time it had become apparent to FBI that Swanson was the duo's target. By placing agents in her hotel room, authorities were able to finally confront the crime-happy duo. When they busted in, expecting to find Swanson, they encountered four fully armed federal agents. After a brief standoff in which everyone pointed their guns at each other, Harry yelled out "Larry, stop pointing that gun at my Dad!" and all parties discharged their weapons. Harry, Lloyd, and three of the agents were killed in the shootout. After nearly three thousand miles and eight murders (not including one parakeet), Harry and Lloyd's legendary crime spree came to a violent end. Their bodies were never found.

A prequel to the movie, entitled "Dumb and Dumberer: When Harry Met Lloyd" was released in 2003. It was met with largely negative reviews and low box office income, because it contained neither the violent scenes depicted in the original film, nor its suspense generated by the character's repeated narrow escapes from the law. The prequel details the meeting of the two main characters while they were both serving time in a Connecticut penitentiary.