From Uncyclopedia, the content-free encyclopedia
(Redirected from Hermann Goering)
Jump to navigation Jump to search 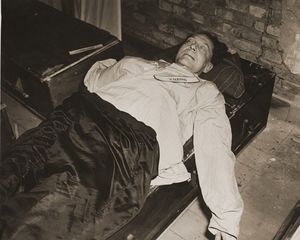 Goering usually sleeps with one eye open and a shotgun (not pictured) in his left hand.

Hermann Wilhelm Göring (or Goering;[1] German: [ˈɡøːʁɪŋ]; 12 January 1893 – 15 October 1946) was a German politician, military leader, and leading member of the Nazi Party (NSDAP). An antisemitic drug-addict and self-described "swell guy who's just a little misunderstood", he is best known for writing The Rise and Fall of Hermann Goering, and also recording the book on audio cassette using his own voice. Every time he says "Ich erkläre mich selbst unschuldig," I cry. The book is based on a fictitious character who kills himself at the end (spoiler warning).

Hermann Goering was born in Germany at the age of 8. During World War I, Goering was a flying ace, having gotten the idea from watching too many Snoopy cartoons. When the Nazis came to power, he was installed as head of the German air force, which he rapidly modernized while the rest of the world clucked their tongues. Like all Nazis, he was a good guy who didn't really even like Hitler and had no idea that the people who were disappearing in the middle of the night and never returning were meeting bad ends instead of being comfortably resettled "out east" like the brochure said. The Nuremberg tribunal found him guilty of four counts of war crimes, and said that he was "lucky that Judge Judy is on vacation this week". The Chief Justice of the tribunal said:

“You're lucky that Judge Judy is on vacation this week.”

Two hours before his hanging, Goering remembered that he had a time-traveling pill in his pocket. Nobody can be sure of what time he is in, but the time police believe he traveled to the future. Rumors say that Goering is now running a Starbucks franchise in Munich. He undermines his own margins by hitting the wares a little too hard, and has a weakness for the cream-filled pastries in particular, which remind him of the Bavaria of his youth. Area bohemians praise his shop's coffee (which is made with choice Ethiopian beans; Goering has sworn by beans from Ethiopia ever since visiting Italian occupation troops there in 1939). Goering has a complex relationship with bohemians, enjoying their money but inwardly struggling with a desire to "do something about them". Employees claim to have heard him mutter,

“Whenever I hear yet another order for a venti skim latte, I reach for my Browning!”

Goering recently registered an Uncyclopedia username so that he could correct the glaring inaccuracies in his Uncyclopedia article. In this way the fullness of his rugged good looks has come to light. In full drag regalia he won the Miss Bavaria title in 1936, causing a Sturm of controversy when he revealed during his acceptance speech that he was not in fact a lady. The runner-up, a female impersonator named Koko LePuffe was not given the winning award, howevr. LePuffe's son, a homeless street performer named Bruno, has been lobbying for several years to have his transvestite father get his due recognition. The judge from Schweinfressenberg said:

“You're lucky that Judge Judy is on vacation this week.”

Hitler himself seems to have had a bit of a man-crush on the healthy, strapping Goering, which goes some way toward explaining the former's complex hatred of homosexuals.

Goering loved the Jews so much he signed this document, giving them the go-ahead to build a nuclear reactor.

During an indictment for 4 counts of war crimes he was quoted saying, "I love the Jews... I was just doing what I was told... peer pressure... Hitler was very intimidating." However, Albert Speer heard Goering say, "I'm going to lose because the tribunal is full of Jews. I can't believe we missed them... I guess someone fucked up." Despite his plea, he was sentenced to death, while pussies like Albert Speer got only 20 years.