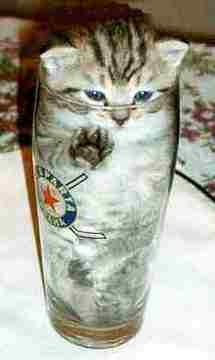 This does not count as "true bonsai," as the cat could conceivably get out if it wasn't so stupid.
“Please don't huff these at home. My respitory system has nthis page is a ever been the same since, and I care about the health of my fans... NOT!”

Bonsai Kitten, also called rectilinear kittens, is the ancient Japanese art of growing live cats inside tiny jars. As the kittens grow, their bones conform to the shape of the jar, creating an adorable and unique pet / ornament. The practice lay dormant for several years until rediscovered by a group of Cal Tech students and is practiced more today than ever before.

The practice of potted cats originated in Japan in the early 15th century, just before the beginning of the Fap Wars. At the time, all Japanese art was dominated by Hello Kitty merchandise. The Emperor of Japan, though resplendent in his pastel pink armor, was interested in developing new art forms. The rest of the Japanese nobility was just sick of being up to their eyeballs in Hello Kitty.

In 1423, a Chinese ambassador visited Japan, and brought with him a group of concubines. The concubines, like many women in China, had been subjected to the practice of foot binding where by their feet were constricted from an early age. This practice was an easy and more-or-less painless procedure which produced small, beautiful feet. It also proved that the Chinese women made easy gimps.

The Japanese, on the other hand, did not have a NEDM fetish but did recognize the potential for bone binding. They found that it was easier to reshape bones by placing them in pots. This led to many years of experimentation in which the Japanese attempted things such as:

In the year 1452, the first potted kitten was attempted. The Japanese found it was completely adorable, highly convenient, and much better than all of the other animals they had tried to pot. In hindsight, this conclusion was somewhat predictable when you consider the whole Hello Kitty thing.

Potted cat, or Bonsai Kitten, as it became known, enjoyed a period of popularity in Japan. It was still practiced when Commodore Matthew Perry, aka The Fucking MAN visited Japan and was given a Bonsai Kitten as a gift by his hosts.

One incident, in the 1950's turn tragedy after Japanese scientists tried to pot a lizard, however fed him growth hormones rather than relaxants, the monster they created ravaged the town and was named Godzilla. Similar incidents include Mothman and when trying to pot chuck norris' they failed and instead every potter got potted himself, only to forever be up andy dick's ass.-- Ultraman.

Later, in the late 90's, a group of MIT students led by their professor, Dr. Micheal Wong Chang, rediscovered Perry's notes and were able to reproduce it in the modern age. After some experimentation, the students found that the kittens grew more pliable when fed a steady diet of muscle relaxers. By tube-feeding the kittens the best modern medicine, they created more beautiful Bonsai Kittens than were possible by traditional Japanese methods.

In 2000 the students offered the first Bonsai Kittens for sale on their website. This resulted in an immediate furor by animal rights activists and people with Asperger Syndrome (otherwise known as hypohumoritis). The students and many new Bonsai Kitten aficionados collectively told the protesters to "Suck it." However, their website was hosted by MIT servers, and as everyone knows, MIT is staffed entirely by miserable communist cunts. The website was shut down only to reappear repeatedly on new servers.

Eventually the uproar caught the attention of the FBI and the Bonsai Kitten sellers were investigated. The bureau, however, found no evidence that any animal abuse had taken place. In an official press release, FBI representatives concluded that the Bonsai Kittens were safe and happy in their jars, and that the protesters could, indeed, suck it. 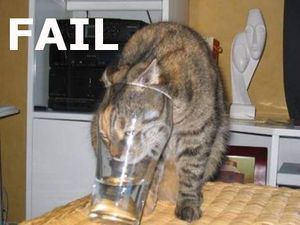 Note to adult cats that wish to bonsai-kittenify themselves: Make sure you use a sufficiently large glass to begin with. Only tiny kittens can use pint glasses.

Raising Your Own Bonsai Kitten[edit]

Since the resurgence of Bonsai Kitten popularity, much has been written about the proper care and feeding of potted cats. The internets host a number of excellent and highly informative websites on the topic. But, lets face it, in the end you've got a cat in a jar. You may be thinking there's really no wrong way to do it. Right? Wrong.

The art of actively growing and maintaining a Bonsai Kitten is a rather involved, tedious and time-consuming task that is not to be taken lightly. For first time Bonsai Kitten hobbyists, it is not considered unnormal for these kittens die prematurely. The action of placing a kitten inside of a jar or glass is a rather tricky maneuver, as many novices find out early on upon horribly mutilating kittens already too old or too large into much smaller jars. Furthermore, if an incorrectly sized jar is chosen for a particular specie of kitten, it will eventually reach critical mass, causing it to collapse into a single-point energized singularity, resulting in the immediate and inevitable destruction of the kitten itself. Even when one has properly placed and sized a kitten into the appropriate jar or glass, the resulting headaches of bonsai kitten maintenance mark just the beginning of the ensuing nightmare.

Bonsai Kittens require constant care and attention, in the form of frequent trimming and watering. One must not let the kittens appendages or fur grow too long, as this could lead it having a longer penis than it's owner and the imbalance of kitten to container ratio. Small, specialty manufactured undersized scissors for midgets are the only appropriate cutting tools for trimming a Bonsai Kitten (or nudering). One must also be careful to not trim said Bonsai Kitten too much, as the entity itself will get pissed off that you beheaded it's cock. requires sufficient surface area in order to properly absorb the sun's ultraviolet rays. These kittens must be watered daily, at regular timed intervals no greater than 8 hours but no lesser than 3, and also must coincide with that particular horoscope for the day. Over-watering or under-watering will result in the premature death of the Bonsai Kitten, at which point the container must be re-potted with a new kitten. Lastly, Bonsai Kittens require adequate amounts of sunlight to grow properly. Simply, if your Bonsai Kitten looks hot, he's probably had too much sun, and if he looks sad he has obviously been in the dark for too long. If you properly follow these steps and take the necessary precautions to Bonsai Kitten Ownership, there is no reason that your Kitten should not live several decades; in fact some of the oldest Bonsai Kittens have outlived their original owners!