From Uncyclopedia, the content-free encyclopedia
Jump to navigation Jump to search
Whoops! Maybe you were looking for The Way of Gerard? 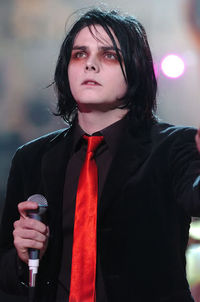 Gerard King Arthur Way (born April 9, 1977) is an American singer for the emo alternative rock band My Chemical Romance. Gerard Way defends his band, which is confused for emo-ness. "It isn't emo. Emo is fuckin' garbage, and plus I fear needles."

Gerard Way is known to swear at his audience every now and then. He often shouts "GET THE FUCK UP! I KNOW YOU DIDN'T PAY JUST TO FUCKIN SIT HERE! GET YO MOTHERFUCKING BODY UP!! NOW WALK TO THE FUCKING MERCH BOOTH AND BUY SOMETHING! YOU DON'T WANT TO BE THE ONLY ONE TO LEAVE EMPTY-HANDED, DO YOU?"

In fourth grade, Gerard began singing publicly and often sang verses from songs by The Jackson 5 while flipping off each and every one of the audience members when a negative line came about. This action has carried on into his concerts we know today, where we can all expect to be flipped off sincerely by Gerard Way during songs such as "I'm Not Okay", "Thank You For The Venom", "Drowning Lessons", and the potty mouthed "Our Lady of Sorrows". If I may recite the great Gerard Way himself;


Gerard Way's snazzy grandmother, Elena Lee Rush, taught him how to sing, paint, get hookers, and paint on MS Paint with only one arm available. "She taught me everything I know." He claims.

Gerard started to love music when Bon Jovi became huge. "Shot through the heart, and I'm not to blame. I never gave love a bad name" states Gerard. 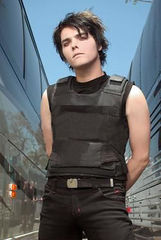 Things got frisky at age 15. Gerard Way was held at gunpoint range for the very first time (this happened more than once?) according to a 2008 Rolling Stones interview. During this interview, he revealed "I was held up with a .357 Magnum, had a gun pointed to my head and forced to the floor, execution-style. That's why I always wear bulletproof vests during concerts. Especially during the 2005 MTV VMAS, where I was most vulnerable."

If I may, once again, quote Gerard Way for another time;

Grab your six-gun from your back
Throttle the ignition
Would I die for you?
Well here's your answer in spades

No actually, it wasn't that bad of a thing. When the towers fell down, it inspired Gerard to start a band. Thus, My Chemical Romance was born. Gerard Way would go on to make 4+ albums, and even claimed a few awards for his fine work. It was a win-win situation, as he also drew the album art for each album besides Danger Days. Which I hear was pretty gay. I like Danger Days though. So... why all the hate?

For those without comedic tastes, the so-called experts at Wikipedia have an article about Gerard Way.

We can all agree, Justin Bieber is not talented.

As a teenager, him and his younger brother Mikey gained interest in music, rather than sex. Gerard Way initially had a passion for shredding. (As in on the guitar, not paper shredding. I mean, seriously? Why the hell would I mean paper shredding?) Gerard Way was given his first guitar at the age of eight by, yes you guessed it, his rockin' grandmother Elena. However, Gerard Way wasn't the best guitarist and was kicked out of every band he played for as a teenager and decided to take a path for art in terms of his future.

To elaborate on before, Gee was working as an intern for Cartoon Network when he witnessed the Twin Towers crumble. Gerard Way revealed, "I remember standing there, in fear. I was motionless. I looked over at this old man sitting on the park bench. I look at him, and I will never forget this guy. He looked at me and said 'I'm never having kids'".

He told Spin magazine, "I literally told myself, FUCK ART! My ass needs to get outta the basement and see what the world looks like."

A few weeks after the September 11th attacks, the Gee made My Chem happen. Gerard became emotionally scarred from these attacks and wrote "Skylines and Turnstiles". If I may quote the great Gerard Way once again;

And in this moment we can't close the lids on burning eyes
Our memories blanket us with friends we know like fallout vapors
Steel corpses stretch out towards an ending sun, scorched and black
It reaches in and tears your flesh apart
As ice cold hands rip into your heart


The use of music as an alternative to drugs allowed Gerard Way to go much deeper in music. This opened up the possibility to write personal songs such as "Helena", which was about his late grandmother, the one and only rockin' grandmother Elena Lee Rush. 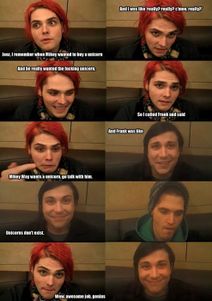 A conversation between Gerard Way, Frank Iero, and Mikey Way about unicorns.

At age 16, Gerard Way made his first attempt to write a comic book. He wrote a short-lived comic book series called "Chicken Wings", which was cancelled after Issue 2 after the art team ditched Gerard. Gerard was credited as "Garry Way"... ... ... ... ...

In 2007, Gerard Way released his first successful comic book strip. He called it "The Umbrella Academy" and his original version was completely altered by Gabe Ba for the final version. Being ripped off for the last time, Gerard Way stuck with only drawing for his albums.

Apocalypse Suite was first released by the Evil Donkey Comix for a sale in which all comic books were free in a store, and where upon Gerard knew nothing about this "free pricing" and was saddened when he did not receive money for it. On the bright side, or the "light side" if I may, this comic book "giveaway" was held on Star Wars Day, May 4th.

Way, believing his fine doings could resurrect all life in the dead wastelands of MySpace, decided to release an eight-page epic on the site called simply "Unsafe and Unsound: I Think Someone's After Me... Sexually".

This, being his first sellout, allowed another release on October 27th, being a month since the first release. I'm sorry, but I must quote again the Gee himself. This is from his song "This Is The Best Day Ever";

And we can run, from the backdrop of these gears and scalpels
At every hour goes the tick-tock bang of monitors as
They stared us down when we met in the emergency room
And in our beds, I could hear you breathe with help from cold machines


Gerard's day got even better when the Apocalypse Suite won an award.

In 2013 The True Lives of the Fabulous Killjoys was released as a comic.

Voila! Gerard Way and the My Chemical Romance crew and the first three albums

I Brought You My Bullets, You Brought Me Your Love

I Brought You My Bullets, You Brought Me Your Love was the debut of My Chem. Turning all PANIC! at the Disco on us, the album needed shortening by fans for everyday talk and is more commonly referred to (for Christ sake) as Bullets. 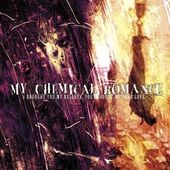 Gerard Way's mad drawing skills were put to its best in this album's cover art. This cover shows some of his best artistic ability.

The album consists of hits such as "Romance", "Honey, I'm Combing My Hair So Get The Hell Out Of The Mirror", "Demolition Lovers", and "Headfirst for Halos". The album also includes assuring statements such as the classic "Vampires Will FUCKING KILL YOUR FAMILY" and even an educational song, "Drowning Lessons". Again;


Bullets was no doubt My Chemical Romance's most violent album, and is also no doubt the band's most unedited album by them. This proves that Eyeball Records can't do shit. They're damn lucky they were good enough as a band. 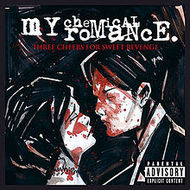 Arrggh, look at all that blood!

Three Cheers for Sweet Revenge was Gerard Way and his band's second masterpiece and is just as violent as the first album. The only difference is that this album does a better job at hiding it.

This album has a better concept album story to it, too. Unlike that of its predecessor. (Where the only story was a psycho maniac killer who received sex for killing people. Then there was some vampires, drowning tutorials, and I don't know) The concept for Three Cheers for Sweet Revenge is about a dude and his girlfriend (the people with blood on their face depicted on the front cover) and how some bad things happen at a bar. These bad things lead to the dude being shot down and killed. He's sent to Hell and asks the devil to be given life again since he still loves his woman. The devil hands him a pathetic pistol and tells him to "bring him the bodies of his ten-thousand evil exes". The album includes hit song sensations such as "Helena", "I'm Not Okay (I Promise)", "The Ghost of You", "Thank You For The Venom", "To The End", "Cemetery Drive", and "Hang 'Em High". The album also includes what appears to be a fashion statement, but really isn't; "It's Not A Fashion Statement, It's A Fucking Deathwish". The album probably also has the most eye-catching song title of all My Chemical Romance songs, the classy "You Know What They Do To Guys Like Us In Prison". If I must recite some beautiful lines from this song;

They all cheat at cards and the checkers are lost,
My cellmate's a killer, they make me do push-ups (in drag)
But nobody cares if you're losing yourself...am I losing myself?!
Well, I miss my mom,
Will they give me the chair,
Or lethal injection, or swing from a rope if you dare;
Ah, nobody knows...all the trouble I've seen!


Do you have the keys to the hotel?!
Cause I'm gonna string this motherfucker on fire! (FIRE!!) 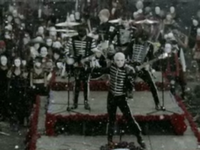 Gerard Way during the Black Parade. This parade, unlike others, was set in Hell.

The third and probably the most successful My Chemical Romance album was The Black Parade. This concept album is a rock opera about a guy who is pwned by cancer and is taken by death in the form his fondest memory; being taken to the city to be touched while watching a marching band by his father.

The most famous song from that album, is the welcoming song; "Welcome to the Black Parade". If I can quote from the song "Dead!";

If life ain't just a joke, than why are we laughing?


The album after this was a dangerous one.

Gerard Way struggled from a minor drug addiction and alcoholism problem for many years up until August of 2004. And by "minor" we mean "almost killed himself because of it". Luckily, Gerard did not kill himself and has been sober since that August in 2004. Yet again, if I may quote Gerard himself;


Gerard Way is married to Lyn-Z of MSI. Together, they have successfully had coitus and made a total of one cute little baby so far with the introduction of Bandit Lee Way to the world in May of 2009. If I may for one last time;


There you have it, folks! A true artist of our times! (In two different ways, and maybe three)