Removing the "Mighty", ironically, made them mightier.

The Analheim Ducks are a harrowing tale of darkness and woe, not for the faint of heart. You have been warned.

A quick quiz before our presentation begins. One of the following four items is out of place with the rest. Can you figure out which one it is?

If you selected (d), you are a member of the small and shrinking cult once known as "Hockey fans".[1]

This group - Hockey fans - is a dangerous mind-controlling cult that traces its origins to a mythical place called "Canada". They worship at cold, dismal, ice cathedrals as objects of their worship skate around sending holy wafers into nets, in order to score points. For more information on this organization, see National Hockey League.

One dreaded summer afternoon in 1990, the oppressive hot Southern California sun a threat to ice rinks everywhere, the members of this cult were dealt a severe blow to their faith when the parent church, the aforementioned NHL, opened its doors to the great Satan, Mickey Mouse. 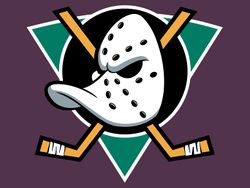 The evil Mouse encroaches on the shrine of Ice Hockey with its horrifying icon.

Satan Mouse had recently produced an anti-hockey propaganda film called The Mighty Ducks, and children's minds were in the process of being contaminated with its evil message - that minority kids and girls can play their sacred white man's game and win, as long as a member of the Sheen family holds them together against all odds. This was always anathema to Hockey fans' faith, and here it was on display, disgusting and vile, for the whole world to witness. The heresy was unbearable to the cultists.

So you can imagine their horror when the church leadership acquiesced to Satan Mouse's wiles and granted him access to their hallowed altar. He came bearing smiling Duck masks that hid his true intent, and the Mighty Ducks of Anaheim were spawned, ushering in the first plague.

The great Satan Mouse was mostly unfamiliar with the intricacies of Hockey worship, so the Mighty Ducks struggled to make way into the holy sepulchre where the most holy artifact of Hockey faith is kept, The Stanley Cup.

Orange County citizens, oblivious to the unholy stain that their team was on the sacred vestments of Ice Hockey, attended the icy cathedrals in droves. Perhaps it was to escape the heat, or perhaps the evil Satan Mouse had taken over their minds; one thing is certain - they surely did not come to enjoy hockey. How could they possibly even fathom its delicate holiness, its intricate rituals, its missing teeth, none of them ever even having been near Canada? For whatever reason they came, these sell-out crowds gave Satan Mouse the support he needed to further his evil aims.

At first, the true Hockey faithful, from cold places like New Jersey and Detroit, were encouraged by the consistent success that teams like the Devils and the Red Wings were able to maintain against these Ducks from hell, and it was a long ten years before Satan Mouse's minions could get close to the holy of holies.

But Satan Mouse is wiley, and eventually he was able to figure out how to pretend to the faith. He seduced players of very high caliber, from good, white places like Ottawa and Alberta, and by 2003 the Mighty Ducks were poised to taste what only good Hockey men had tasted before.

But the Devils stood in Satan Mouse's way. In the first Stanley Cup Final series to be played thirty yards from the nearest palm tree, the Devils beat the Ducks mercilessly for their impudence. The Ducks went back to their sun-drenched beaches in shame. Hockey fans from the 45th parallel up rejoiced, praising their Devils for preserving the faith.

Satan Mouse slinked back to his mouse hole in Southern California to regroup and make a new run to usurp the holy Cup.

But then a strange thing happened. The Occult of Players, a coven of Hockey players that controls the finances of the church, refused to relinquish their control. This made the priests of the parishes shut the church doors, and Hockey was in trouble. This schism threat prompted Satan Mouse to release the team from his dreadful clutches.

The team quickly removed the hellish cartoon image from its chest insignia and rid itself of its association with Emilio Estevez. But the great Satan Mouse had left his mark nonetheless. The new team lacked confidence to remove the Duck moniker entirely, having approached the holy of holies so closely as the "Mighty Ducks".

The Holy of Holies sullied forever[edit] 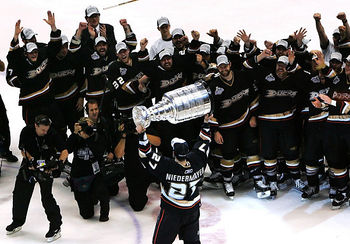 The slight change did not appease Hockey fans entirely. Though glad to be rid of the clutches of the great Satan Mouse, they were still offended by the presence of their holy sport in this hellish county. However, the protests and supplications of these Hockey fans was too little. As though there were no Hockey god at all, only two short years after the Occultists and the parish priests resolved their schism, the Anaheim Ducks were able to assemble their greatest team ever.

To the horror of the Hockey fans, the Ducks lifted their sacred Stanley Cup high over the smog and freeway traffic of north Orange County for the whole world (and both Southern California Hockey fans) to see. There was great turmoil in the heavens, the sky opened up, brimstone rained down, and hockey was lost to the cult forever. An evil Hollywood cartoon had invaded their church, and its spawn had sullied their altar.

Satan smiles from his mouse hole[edit]

The mystique of Satan Mouse follows the Ducks to this day - the mystique of having invaded a holy place and sullied it with its satanic waddle and horrible bill. The Anaheim Ducks live on, and omens (and incredible goaltending by Jonas Hiller) portend that they may soon regain that glory. Hockey fans, their game stolen, their holy artifact denigrated by a cartoon, to this day have never been the same. Legend has it that when a Canadian team (besides the loser Maple Leafs) wins the Stanley Cup Playoffs, the Cup will be purified. Unfortunately, there are too few Canadian hockey teams left, and even if the Coyotes end up moving to Hamilton[2], it won't really help.