Seriously, would you mess with this guy?

Gerry "Buzzsaw" "Hacksaw" "Chainsaw" "Deathtoll" "Manslayer" "Axemaniac" Cheevers was a demi-god who, appearing in the form of a hockey goaltender, backstopped the Boston Bruins to Stanley Cup victories in 1970 and 1972. Emerging from the mythical and legendary Canada under suspicious circumstances, he still holds several NHL records, most of them involving violence of some kind. Known for his impressive career statistics and unusual choice of headgear, Gerry Cheevers is one guy you don't want to fuck around with.

His trademark goalie mask was the result of an errant puck which struck him in the face during practice. As a joke, his trainer drew stitches on the mask where Cheevers would have needed them had he not been wearing it. Gerry found the mask so amusing and intimidating that he continued this drawing stitches where he was struck until there was virtually no un-stitched portion of the mask. This rendered him much more terrifying than others who tried to imitate him, and also illustrated the fact that if he had not worn the mask his face would vaguely resemble raw hamburger. He was once asked if he did similar artwork on the gear of his opponents. Cheevers replied in a serious tone, "they don't let me into the emergency room."

Not much is known about Cheevers' early life. While it is possible that he materialized from nowhere as a sixteen year old phenom goaltender, hockey experts point out that this theory is "stupid". In any case, he made his professional hockey debut in 1956 playing for the Saratoga Skunk Apes of the Ontario Hockey Gathering. Cheevers showed considerable talent, but his coaches worried that his violent style of play would prevent him from reaching elite goaltender status. They ordered Gerry to defend his net without a hockey stick in practices, forcing him to both rely more on his body and pads to make saves, and challenging him to resist the urge to mercilessly hack the opposing players. 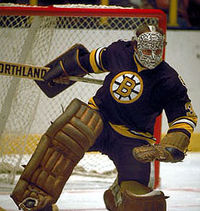 Cheevers is seen here in the follow-through of one of his patended 'gutbuster' slashes.

Gerry's struggle with violence was a motif throughout his career. Whenever it seemed like he finally had control over his sudden outbursts, a passing player would skate too close and Cheevers would be unable to resist slashing a shin at the very least. Violence inevitably led to more violence, and he suffered much personal anguish in the early 1960s due to the uncertainty of his career path. In those days, the NHL, the highest level of competition for America's national pastime, emphasized skill over brute force. This was not very conducive to his style.

Luckily, in 1965 the NHL decided that the current style of play was for "nancy-boys" and altered the rules to result in a much more physical game. This suited Cheevers, even though his occasional lapses in concentration could still lead to penalty minutes, suspensions, and delays in games whilst bloodstains were removed from the ice. He redoubled his efforts at improving his goaltending fundamentals and averaged only twenty seven penalty minutes per game in the 1966 season, a career low. Gerry was ready to hit the big time.

Cheevers landed the starting goaltending job with the Boston Bruins in 1967. Over the next three seasons he amassed a goals against average of 0 and a save percentage of 1. However, these stats are padded by the fact that nearly all opposing players were too intimidated to skate anywhere near him. These fears were not unfounded; Cheevers regularly kidnapped the other team's players and held them captive in his net for large portions of a game. He struggled to control his temper at times, particularly one incident that left three toothless and led to Cheevers sitting out much of the 1968 season.

Rumors exist that Cheevers had a clause in his contract that allowed him to drink beer between periods. These rumors are true, and have also been massively understated. He would drink a six-pack before each game and between every period, and could often be seen making unnecessary pad saves on high shots because his glove hand was busy trying to not spill his Miller High Life.

The Bruins entered the 1970 Stanley Cup playoffs after one of the bloodiest regular seasons in memory (although hockey players have notoriously poor memories due to repeated head trauma from collisions with pucks, sticks, the ice, each other's fists, and Celene Dion). Their opponent in the first round was the New York Rangers, a ragtag bunch of Mounties exiled from Canada for their disruptively above-average hygiene. Cheevers was to face his long-time rival Terry Sawchuck, who had five years beforehand robbed a bank using a replica Cheevers mask, causing the real Cheevers to be asked uncomfortable questions. 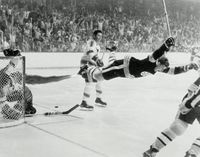 Bobby Orr launching himself into regions of space that were uncharted in 1970.

Boston took an early 2-0 series lead at home, and spirits were high. Yet upon skating onto the Madison Square Garden ice for game 3, the Bruins were met with vicious taunts by drunk and unruly fans. Spectators pelted Cheevers with coins, rubber balls, eggs, rubber rats, and one actual rat. However, Cheevers didn't allow a single piece of debris into the net, setting a modern record for saves in a game (1549, including 31 that were actual shots from the other team involving pucks). Later in the series, up three games to two, the Bruins returned to Madison Square Garden. Cheevers allowed two goals because he was again forced to enter the stands and engage in fisticuffs with dozens of unruly New York fans (which luckily was not a penalty in 1970). Nevertheless, the B's clinched the series with a 3-2 win.

Riding on the momentum of their victory over New York, the Bruins went on to defeat Chicago and Rio de Janeiro to advance to the Stanley Cup finals. There they faced the St. Louis Blues, a team formed from the remnants of the ill-fated St. Louis Symphony Orchestra. However, Boston easily steamrolled St. Louis in the first three games, with Cheevers tallying ninety-four saves, ten penalty minutes, and four bruised spleens. In overtime of game four, a robotic jet-powered Bobby Orr scored the game-winning goal in overtime and immediately blasted off and entered low-earth orbit where he is currently used as a GPS satellite.

Cheevers enjoyed what was probably his best season in 1972. At his peak in both goaltending ability and physical intimidation, he went undefeated in 33 consecutive games. During this streak he faced some of the most elite players in the history of hockey, ending the careers of several. Similar to professional wrestling "heels", or "bad guys", Cheevers had by this time mastered the art of attacking opposing players only when the referee's back was turned, leading to fewer penalties for Cheevers and more mysterious injuries to opponents.

The 1972 Stanley Cup Finals are considered to be some of the most poorly played hockey in NHL history. The Bruins faced their old rivals, the New York Rangers. Many sloppy goals were scored, and the New York strategy of provoking Cheevers worked much to their advantage (although not to their health). The Bruins' tandem of Phil Esposito and Wayne Cashman combined to score 39 goals in the series, yet it was barely enough, since Cheevers played relatively poorly in games 1, 3, and 5. By game 6, Bruins head coach Tom "Tom Johnson" Johnson had managed to harness Cheevers' wrath. He posted a shutout, securing the second Stanley Cup in three years for the B's.

Cheevers continued turning aside vulcanized rubber for the Bruins through the 1970s, racking up the saves as well as the penalty minutes. He had several run-ins with the Broad Street Bullies, so named for their tendency to steal opposing teams' lunch money. In the late 70s, Bruins coach Don Cherry encouraged physical play from his team, modeling his approach after his feisty bull terrier. The Bruins won several division titles under the reign of terror inflicted by Cherry and Cheevers, but failed to win another Stanley Cup due mostly to Cherry's insistence on also modeling the team's offense after his dog's behavior. Don Cherry went on to be voted one of the top ten Canadians of all time, along with one of the top ten best-dressed Canadians of all-time. He was the only person to make both lists.

In 1980 NATO ruled 'any use of Gerry Cheevers in organized competiton or warfare' to be illegal. Cheevers wandered for a while after that, enjoying repeated guest appearances on the sitcom Who's The Boss. He currently runs a camp for young children where they are taught proper goaltending fundamentals and the most effective way to incapacitate an opponent using a hockey stick.