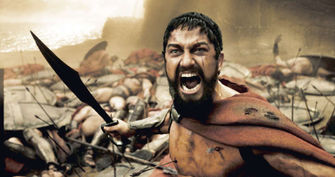 For the Persians among us who choose to believe lies, the self-proclaimed experts at WikipediAAAAAA think they have an article about King Leonidas.
“This is not tap water. THIS... IS... BRITAAAAAA!!!!!!!!”

~ King Leonidas on his glass of water

Leonidas[1] (Λεωνίδας Leōnidas, died 9 August 480 BC) was the 17th hero-king of SPARTAAAAAAAAAAAAA. Born from the virgin womb of ALI LARTAAAAAAAAAAAR, he grew to become a tough, resilient, angry, and most importantly LOUD ruler. His actions as King of the small military state were documented in Zack Snyders's Academy Award winning historical-epic, 300. He is also notable for defying the Greek stereotype of using logic to overcome problems, instead preferring to kick his problems into a bottomless pit he has dug himself specifically for that purpose.

Leonidas is also known for being a highly-regarded connoisseur of fine foods, often dictating which restaurant his small unit of bodyguards shall dine at. Occasionally, his culinary tastes have let his troops down, such as the time when he took them for a meal in Hell.

Leonidas as a child.
Damn! He's got a beard at age four!

Leonidas was born sometime around 540 BC, with not only a full head of hair, but a beard as well. He was diagnosed with bipolar disorder from a very early age. Hippocrates, his child psychologist at the time, would notice that whenever a fellow playmate of Leonidas would make fun of him for having a beard, Leonidas would enter into a rage and kick them into a sand pit he had been digging all afternoon.

H Ali Larter, immediately entered him into the military academy at the age of 6, even though he would have had to enroll anyway, seeing as the age for compulsory service in Sparta is 7 years old. This age gap between him and the other soldiers would only make for a stronger, braver, crazier, sexier Spartan warrior. 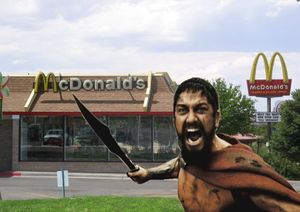 "Tonight, we dine in Hell"

When he returned home from his training at the age of 17 years old and saw his mother for the first time in years, Leonidas entered into his first true spiritual battle... against the Oedipal Complex. Fortunately, he succeeded in conquering his incestuous desires, by excusing himself from the dinner atrium and immediately heading to the nearest whorehouse. Arguably the finest hour in Spartan history, if not the whole of Ancient Greece. Leonidas was immediately given the title of King for this brave and admirable feat of strength in overcoming his prostitutional desires. 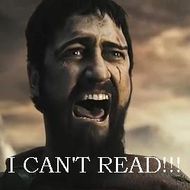 You shouldn't have kicked your English teacher into that bottomless pit.

Like many ancient mythological rulers, Leonidas was disputed to have otherworldly powers that helped him in his wars and conquests. A subject of debate amongst scholars for as long as there has been both scholars and the word "amongst", it is a certainty that one of these powers has something to do with either the manipulation of the flow of time, or at least moving at speeds that are at odds with time. The second affects projectiles, though specifically how is up for contention. All we have is a set of raw data concerning the uses of these powers. 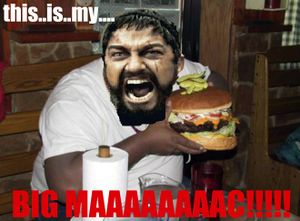 Leonidas at Big Kahuna.
He doesn't like anyone near his food, apparently. 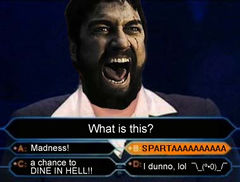 Many have wondered why Leonidas chooses to elongate any words that end with the pronounced syllable "AAAAAAAA". Few have come up with reasonable answers. Some believe he has a major migraine, which cannot be cured with aspirin. Others choose to believe he is expressing the animal rage that dwells within his heart. And of course, there are also those who put it down to his man-thong being too tight. Many choose the latter...

Unfortunately, it seems that it will remain a mystery as to what the pain is that causes this supreme being and warlord to ferally scream and shout his words.

A great mystery indeed, full of flavor and intrigue.

A mystery served almost exclusively in...

As well as his loud voice and expert battle tactics, Leonidas is also known for being a connoisseur of food and drink, with his judgments taken highly seriously by fellow food critics and ordinary people alike. At the end of a hard day conducting genocide and exterminating invaders from East Asia, Leonidas will treat his battalion to a meal at a restaurant of his choosing.

Most of the time, Leonidas will pick well in his choice of dining. However, there have been times where his plans have backfired. Such as the time when Leonidas took his soldiers for McDonalds breakfast, only to find they stop serving after 11:00AM. Leonidas and his soldiers revolted in anger, resulting in the Great Battle of McDonalds. A similar incident also occurred when he told his soldiers that they were going to dine in the new spot that opened just outside the Hot Gates, named "Hell". Unfortunately, on their journey to "Hell", they were killed and slaughtered by the Persian army who also wished to get a table and would not risk losing out because the Spartans had got there first. Although Leonidas and his soldiers were mercilessly butchered, Leonidas still got the last laugh as he threw a spear at King Xerxes' mouth, rendering him unable to eat for the rest of the day.

Life as an Internet Meme

Leonidas in his war to become the supreme Internet Meme.

Leonidas has enjoyed immense immortality as a popular internet Meme, even possibly surpassing Chuck Norris and Vin Diesel, although Leonidas has yet to have his own fact generator. Still, upon the release of 300, there have been huge reports of teenagers and school children kicking each other in the chest whilst shouting "This is (x)".

Additionally, many 27 year old men will proclaim to a group before going out for a meal, "Tonight, we dine in (x)". It appears Leonidas has achieved what Xerxes always wanted, in becoming a God-King worshiped, loved, and imitated by all.

It appears Leonidas' influence has even managed to pervade the workings of the White House, as George W. Bush reportedly told a representative of Saddam Hussein, "THIS... IS... AMERICA!!!!!!!!", before kicking him in the chest.

The following cell phone footage captured by Persians shows the gentleman's performance at the final battle at Thermopylae. |