Many commentators, including LeBron, consider LeBron to be the greatest basketball player of all time. LeBron's self-designation as the GOAT has led to speculation that he will enter next year's World Autofellatio Championship.

For those without comedic tastes, the so-called experts at Wikipedia have an article about LeBron James.

Although no one born in Akron knows who his father is, LeBron's resemblance to King Kong is unmistakeable.

LeBron James is one of the most intriguing human specimens on the planet. Doctors who witnessed the birth say LeBron jumped out of his mother, 16-year-old Gloria LeBron, at an astounding 6'3", 235 lbs, instantly killing her — a sad loss for the Intercity Women's League, where Gloria, heavy with child, was already becoming famous for setting effective picks.

Luckily, one of the many incompetent NBA referees was present and assessed the newborn LeBron with a flagrant-two foul. LeBron proceeded to cry, which was punished with a $25,000 fine. The episode obviously occurred before NBA Commissioner David Stern understood LeBron's full marquee potential.

LeBron's name was registered based on documents that Gloria left behind. Tragically, the simple lack of a comma resulted in the permanent transposition of his obvious first and last name. LeBron hopes to divert attention from this case of African Americans being unserious about naming their newborns with his recent move to Miami, where he will be paired with Dwyane [sic] Wade.

Currently, LeBron James is measured at 6'8". His weight remains unknown, as it is off the scales devised for measuring people, and his contract provides that he does not have to walk onto a truck scale. As unseen planets are detected orbiting stars, LeBron's weight is estimated at 14 metric tons based on his gravitational pull on other heavenly bodies on the hardwood. His actual weight also varies depending on the amount of jewelry he elects to wear onto the court. 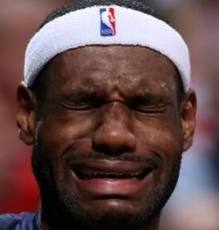 Despite abridging his formal education, LeBron came to the NBA fully mature.

LeBron's college career is easily summarized: There Isn't Any. Due to the high likelihood of success in the NBA, and the virtual certainty of failure in the classroom, the NBA drafted him right out of high school, when the Cleveland Caucasians selected him with the first pick overall in 2003. The team, which was then referred to as the Cadavers, acquired the right to draft this specimen of excellence by being a specimen of awfulness, resulting in LeBron amassing several records for an NBA rookie, as the only member of the team who could either dribble or shoot.

Unfortunately, child labor laws prevented the Cadavers from drafting LeBron straight out of elementary school, and he put together numbers for Akron's Saint Godzilla High School that were only slightly better than the child star could have done in the NBA.

Darling of the NBA

LeBron won the NBA's Most Valuable Player (MVP) award in two consecutive years (2009 and 2010) as had never happened before, and not because no one else was that good.

LeBron can take a plane flight and turn off his cell-phone without consequences. Or, he can get on the phone with NBA Commissioner David Stern to make sure it is still okay for him to shove opponents without a foul being called. 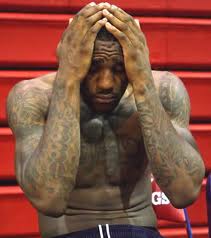 The moment that LeBron discovered he did not receive the simple heart-with-girlfriend's-name that he requested.

Unbeknownst to most NBA fans, LeBron's body is covered with tattoos. A banner on his back proclaims him to be the "Chosen 1." Unfortunately, negotiations with the NBA to let him play without the usual uniform shirt have stalled. LeBron's agent believes that the large "1" in the tattoo could serve as a jersey number, and is unnecessary in any case because LeBron never commits fouls.

On the left arm are names and renditions of LeBron's two sons. In case he forgets. This was a satisfactory alternative to full custody.

On the right arm is "Akron," LeBron's hometown, In case he forgets, and "330," the telephone area code, and incidentally, the typical number of steps LeBron takes to drive the lane. In 2010, the Miami Herald reported that he had an appointment with a local tattoo parlor to strike out "330" and tattoo underneath "305/786," the area codes for Miami (land-lines and cell-phones, respectively). If additional blank space can be found elsewhere on his body, the tattoo artist will append the remainder of his home phone number, to simplify phoning home to find out if any new contract offers have come through, and to facilitate communication with groupies.

Whenever LeBron comes driving down the lane, other players get the hell out of the way, the alternative being to have LeBron dunk on you, with either his testicles in your mouth or your teeth on the floor. The result is dozens of points on uncontested shots. Occasionally, a rookie who has either not yet suffered a season-ending injury or is already on painkillers fouls LeBron. LeBron goes to the free-throw line, where he entertains fans with a dazzling mixture of bricks and air-balls.

LeBron tends to take about eight steps before every successful layup, a nuance permitted by the NBA's star-coddling interpretation of the rulebook. Whether violating the rule against traveling or traveling over the loyalty of Ohioans, the NBA believes that, to paraphrase an Eisenhower cabinet secretary, what's good for LeBron is good for America.

LeBron's perennial duel with Kobe Bryant is summarized by Bryant consistently dominating and embarrassing LeBron. Bryant wins championships, but LeBron instead relishes taking his team deep into the playoffs, regardless of its inability to win the key game. Likewise, LeBron enjoys winning the MVP award year after year, while Bryant settles for the relatively minor award for MVP of the league Finals, which Bryant's team wins and LeBron's team rarely reaches. 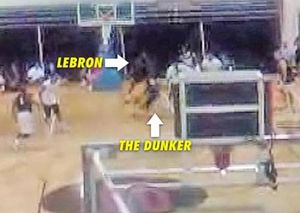 Fortunately for the historical record, the NBA was unable to track down and kill every spectator who brought a cell phone into the arena. This unauthorized photo shows the pwnage of LeBron with crystal clarity.

In 2009, at a skills clinic at Xavier University organized by LeBron and sponsored by Nike, basketball wannabee Jordan Crawford got around LeBron's impenetrable defense and slam-dunked a basketball. LeBron, who was still dealing with an urgent text he had received and was trying to work those tiny buttons, insisted that the organizers confiscate the CBS videotape.

Commmissioner Stern, a more shrewd businessman, helpfully tied up the loose ends by having all the cameramen killed and having Crawford forcibly hypnotized to forget the incident.

LeBron's Wikipedia article, despite treating him with kid gloves, admits that his amateur censorship "courted controversy." Fortunately for gate receipts, neither this nor any of the other controversies LeBron courted went all the way. 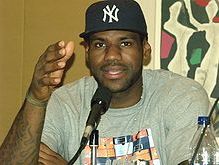 Before the move, Cleveland had absolutely no basis to question LeBron's loyalty to the city.

Like Richard Nixon eagerly hoping that uncooperative subordinates "twist slowly, slowly in the wind," LeBron thanked the City of Cleveland for 7 seasons of uncontested fame, 6 NBA All-Star Games, a scoring championship, 2 MVPs, 4 NBA All-First Teams, a Rookie of the Year award, and zero of the NBA Championships he had promised the city by attaining free agency, conducting a week of high-profile flirting with out-of-town teams, and announcing his decision in a one-hour program on the ESPN sports network, which followed a three-hour pre-game show.

There he announced he would "take my talents to South Beach," which is a nightclub district a mere taxicab ride away from where the Miami Heat play. He gushed about the Heat, which recently won a full 15 games in the 82-game NBA season. Dan Gilbert, owner of the Cleveland team, took out a full-page ad to wish LeBron the best. "We don't need you. We never needed you," Gilbert insisted. Psychologist Jesse Jackson explained to a confused nation that Gilbert was obviously a racist who viewed LeBron as "a freed slave."

Pwnage on the ridings

Although LeBron has ridden South, his Mama is still riding West. But it's not worth swearing at fans, Big Guy.

In April 2011, LeBron's Mama rode a Miami Beach parking valet at four in the morning, but police released her on personal recognizance. "You have to move forward," LeBron told the press. "There's certain things you have to deal with." Readers will understand the delicate nature of the situation, recalling all the times their mothers have been booked for assault.

In line with the ancient Mayan prophecy, massive chaos was to happen by December 2012. By a stroke of luck. LeBron is the finals MVP and as NBA Champion, and has won a Finals ring in Miami, Cleveland (after the city begrudgingly forgave him and gave him a second chance), and with the Lakers, thereby fulfilling some wack-ass prophecy, preventing the demise of the world and humanity and becoming our savior. Yaaayy. If only he knew that Jeff Bezos is planning something nefarious and might actually be the Anti-Christ.

“UGGHHHHHHHH! LeBron James with NO REGARD for human audiences!”

Fresh off his newfound status as the savior of the world and the "Next MJ or Kobe", Lebron decided to "take his talents to the silver screen" and become a movie star, following the likes of MJ and Shaquille O'Neal. Avert your eyes. LeBron is a basketball playing dude, not a movie making dude, for a reason.