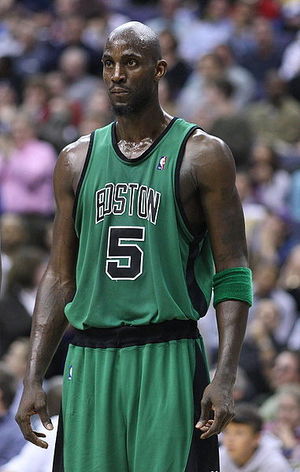 Kevin Garnett stares into your soul.

Kevin Maurice Garnett (born May 19, 1976) is an American professional basketball player who currently plays Center for the Boston Celtics and the Minnesota Timberwolves of the National Basketball Association (NBA). Drafted to the NBA straight out of high school, Garnett became the 5th pick of the 1995 NBA Draft and led a very successful career with the Minnesota Timberwolves. According to him, anything is possible.

Throughout Garnett's twenty-two years of playing in the NBA, various coaches, players, and survivalists have tried to create strategies to avoid a quick and painful death upon running into Garnett. Unfortunately, none of thse strategies have proved to be conclusive, and only serve to make Garnett angrier, as well as increase his insatiable bloodlust.

You Just Stepped into the Celtics 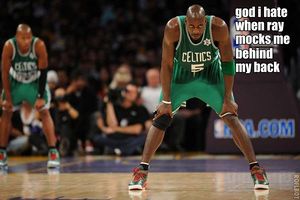 Garnett is already pissed at his teammates. Your presence only makes him angrier.

In 2007, Garnett was traded to the Boston Celtics, where he led them to their seventeenth NBA Championship in the 2007-2008 season. Garnett wasn't born, he just suddenly appeared with an insatiable bloodlust praying on "superstars", bench-players, role-players, everyone. If your name isn't Kevin Garnett, you're dead. Oh shit, man. You're going to die. You don't just step into the paint when you're up against Garnett. The paint is HIS house. That is where HE dominates.

This time, Garnett going to challenged Pierce and Allen as the combination GAP to a race around the world. And now he's going to dominate you. He's going to crush you, man, and honestly, there's nothing I can do about it. Please, for the sake of us all, just drop the basketball. It just looks silly now. That ball, for all its purposes, belongs to Garnett, and he's going to use it to score every point for his team. He may also use it to crack open your skull. 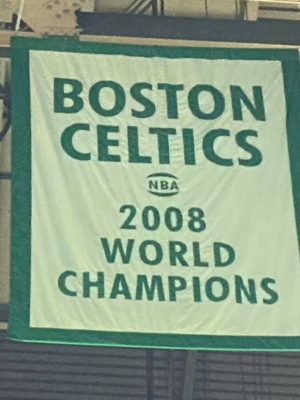 Don't Try and Get Away To Timberwolves With It 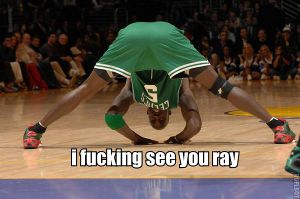 Garnett doesn't let his teammates get away with anything. And he's not going to help you out, either.

He can smell fear. He can smell your sissy white Nikes flopping onto that court, and he knows your fate. You're dead. He's going to crush you under his gigantic feet, drain your blood, and then drink it from his chalice as he sits on the bench and lets Scalabrine go on the court for a minute, just for shits and giggles.

It is a well known fact that in addition to a rockin' stache, rippling muscles, and eyes like a hawk, Garnett also has sonar. So, if you think you can sneak onto HIS court, maybe get the ball from a teammate and try and go for some kind of fast break, you're very wrong.

Running Isn't Going to Save You 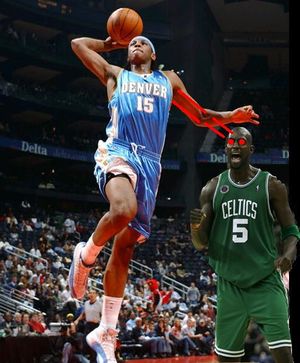 At a whopping seven feet, one inches, Garnett is one big-ass dude. Each stride he takes with his tree trunk-like legs is like a thousand steps for a normal man. One time, Garnett challenged LeBron James to a race around the world. Garnett beat James before James could even finish lacing up his shoes. Garnett then proceeded to consume James.

But maybe you're one of the lucky guys. You managed to distract Garnett, maybe by telling him a hilarious Knock Knock Knock Joke, and you ran for it. Good for you. You're free and alive!

Oh wait. Did I mention he has fucking heat vision? Oh yeah. I forgot. You're dead, chief.

This Could Have Been Avoided 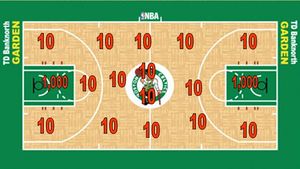 Here is a map of the safest areas to be when playing against Kevin Garnett, from a scale of 1 to 10, 10 being the most dangerous

The key to surviving an encounter with Kevin Garnett is just to avoid an encounter with Kevin Garnett. You know how they say the best place to be during a thunderstorm is in your car? Well, the best place to be in a Your Shitty Team vs. Boston Celtics game is also in your car, outside of the stadium, while Garnett slaughters your whole team. Don't feel guilty. It's called Survival of the Fittest.

Garnett Sees You Reading This

Oh my God. I've said too much. Quick run for it before it's too la-